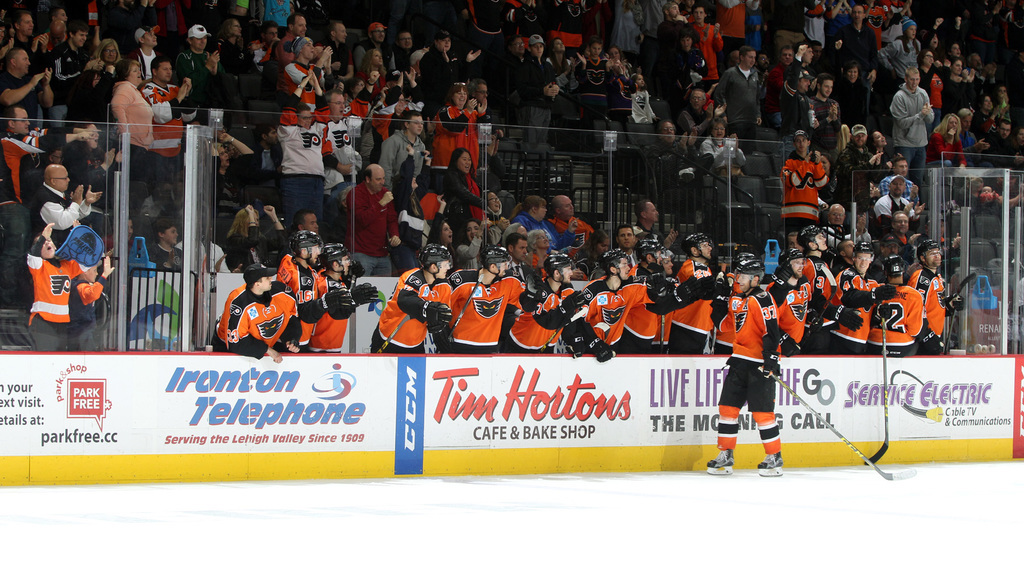 Coming off an incredibly successful five-game road trip in which they claimed eight of a possible 10 standings points, the Lehigh Valley Phantoms (17-16-2-1, 37 pts., 5th Atlantic Division) return home for games at PPL Center this Friday and Sunday. 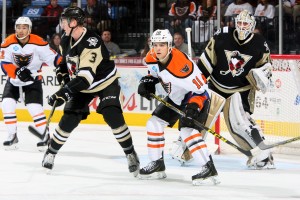 The Phantoms return to the frozen surface this Friday, January 8 when they welcome the rival Wilkes-Barre/Scranton Penguins to downtown Allentown. Wilkes-Barre/Scranton (23-8-0-1, 47 pts., 1st Atlantic Division) enters the week atop the Atlantic Division and second overall in the Eastern Conference after capturing a 4-1 win at home over the Springfield Falcons on Saturday before earning a 3-2 road triumph at the Hartford Wolf Pack on Sunday. The weekend’s victories snapped a modest three-game losing skid for the Penguins who have still claimed seven of their last 11 games overall.

Friday’s contest will mark the sixth of 12 total meetings during the 2015-2016 regular season between Lehigh Valley and Wilkes-Barre/Scranton with the Phantoms holding a 2-3 record head-to-head against their in-state rivals. 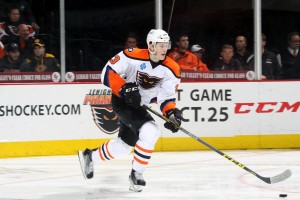 Lehigh Valley then returns to the road on Saturday when the Phantoms head to the Times Union Center in Albany for a 5:00 p.m. showdown with the Devils. Albany (20-8-3-0, 43 pts., 2nd North Division) enters the week with the third-highest points percentage in the Eastern Conference and is currently in the midst of a four-game winning streak. The Devils extended their current winning streak with a 4-1 victory at the Utica Comets on New Year’s Eve followed by a 4-3 triumph in Hartford two days later. During its recent surge, Albany has outscored its opposition 15-7.

Saturday’s game will be the second and final meeting this season between the Phantoms and Devils after Lehigh Valley was handed a 2-1 overtime setback against Albany at PPL Center back on November 14.

The Phantoms then return to downtown Allentown on Sunday when they welcome the Binghamton Senators to PPL Center for a 5:05 p.m. tilt. Binghamton (11-17-3-0, 25 pts., 7th North Division) enters the week with the lowest points percentage in the Eastern Conference but is currently one of the hottest teams in the league having won five of its last six games overall and collecting 11 of a possible 12 standings points during that stretch. Last week, the Senators claimed a 2-1 shootout win over the Phantoms on Tuesday and a 3-2 regulation triumph over the St. John’s IceCaps on Thursday before suffering a 6-5 shootout defeat at the Hershey Bears on Saturday.

Sunday’s contest marks the fifth of eight total meetings during the 2015-16 regular season between Lehigh Valley and Binghamton with the Phantoms holding a 1-2-1 mark head-to-head against the Senators. Sunday’s collision will be just the second meeting at PPL Center after Binghamton claimed a 4-1 decision in downtown Allentown back on November 8.

This Sunday is Star Wars Night at PPL Center as the Phantoms will celebrate one of the most beloved film franchises of all time. Fans are encouraged to come dressed as their favorite Star Wars characters and will have the opportunity to meet and take pictures with some of the most iconic heroes and villains in movie history with a special appearance from the 501st Garrison.

Tickets for both Friday and Sunday’s game in downtown Allentown are available now at pplcenter.com, by calling 610-347-TIXX [8499] or in person at the Mealey’s Furniture Box Office at PPL Center [701 Hamilton Street].

Andrew MacDonald scored his fifth goal of the season and Anthony Stolarz denied 39 of 40 total shots but the Binghamton Senators were able to outlast the Phantoms 2-1 in a shootout. The 39 stops for Stolarz was his second-highest save total of the season as the second-year netminder helped Lehigh Valley capture a critical standings point. 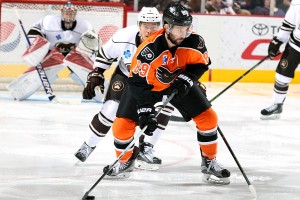 Danick Martel scored twice, including the game winner, and Jason LaBarbera recorded 27 saves as the Phantoms closed out 2015 with a 3-1 victory over the Hershey Bears. Aaron Palushaj also found the back of the net for Lehigh Valley as the Phantoms earned their third consecutive win over their in-state rivals.

Sam Gagner, making his Phantoms debut after being loaned to Lehigh Valley from the Philadelphia Flyers just 24 hours earlier, tallied an assist in the triumph.

Petr Straka netted his league-leading 17th goal of the season but Kyle Rau was able to score twice, including the winner in overtime, as the Portland Pirates handed the Phantoms a 4-3 setback. Mark Alt and Aaron Palushaj also scored for Lehigh Valley as Anthony Stolarz turned aside 28 of Portland’s 32 shots in the game.

Rob Schremp and Garrett Wilson also converted for the Pirates as goaltender Mike McKenna produced 29 saves in earning the victory between the pipes. 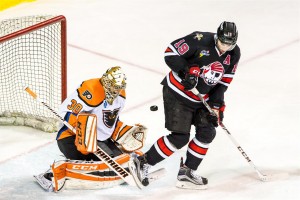 The Phantoms closed an incredibly successful five-game road trip and capped a weekend series in Portland with a 2-1 win over the Pirates. Cole Bardreau and Danick Martel provided the offense for Lehigh Valley while Jason LaBarbera recorded a season-high 37 saves in earning his third consecutive victory in goal.

The Phantoms’ penalty kill denied all five of Portland’s power play opportunities in running its streak of consecutive successful penalty kills to 28.