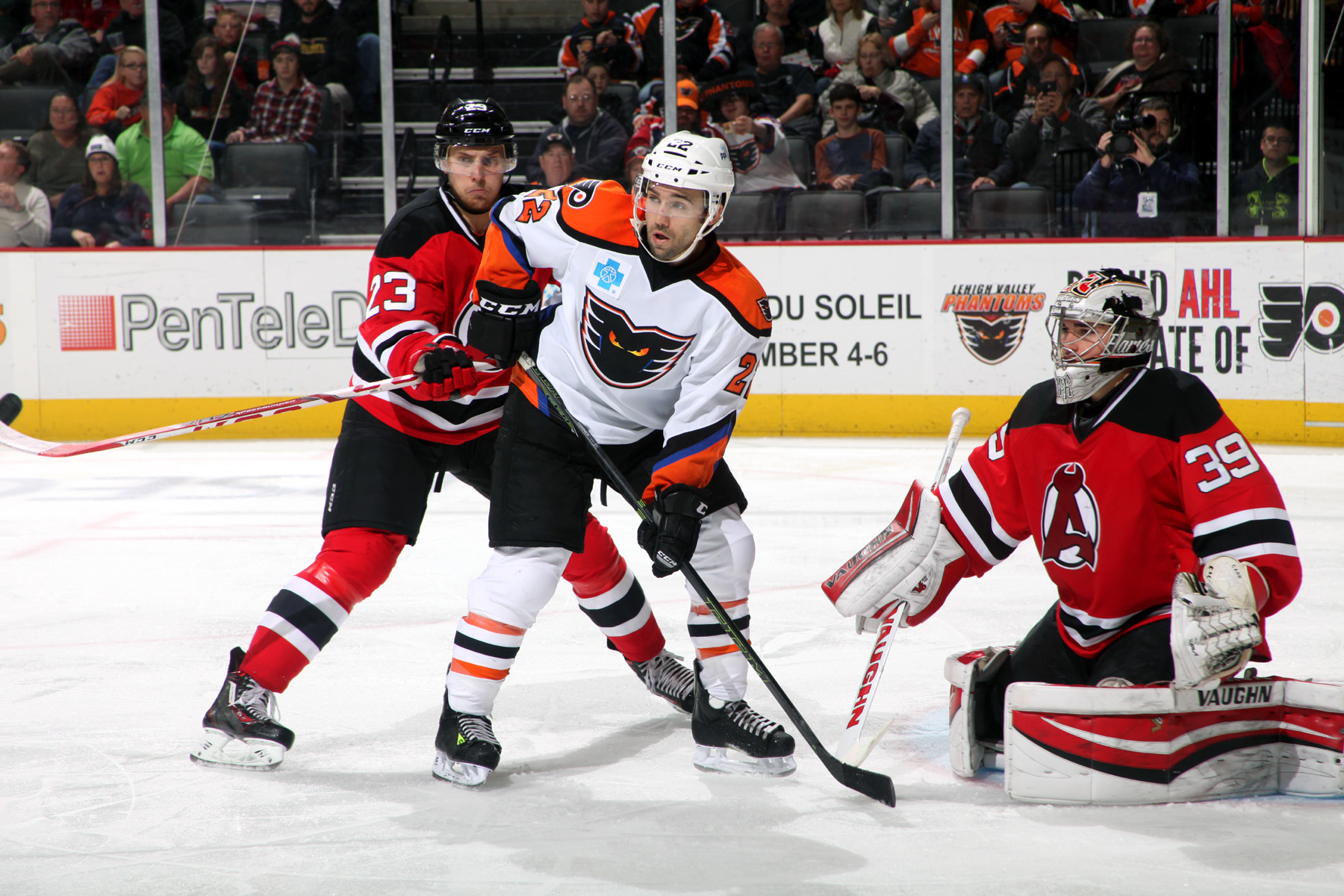 Joe Rehkamp and Davis Drewiske Both Score First of Season

Lehigh Valley’s tremendous penalty kill unit had thwarted 30 consecutive power plays and had not allowed one since December 18. But Albany racked up their league-leading 34th and 35th power-play markers of the season to spark the victory. The Phantoms had also killed 38 straight away power plays in a streak that included a perfect December road penalty kill but on this night Lehigh Valley would falter for the first time since November 25 putting a close to the seriously impressive stretch.

Lehigh Valley officially hits the midway point of the season having played 38 games on the 2015-16 docket with 38 games remaining. After a brief trip over the .500 mark the Phantoms now find themselves hovering just below the break-even point at this juncture with an overall record of 17-18-3.

The Albany Devils, the second-place team in the North Division, won their sixth straight and improved to 13-4 in their last 17 games in a hard-nosed battle against a Phantoms squad that looked to be the better team at several points during the contest.

It was a night of firsts for Lehigh Valley on their way to receiving offensive contributions from less likely sources. Rookie Joe Rehkamp notched his first-ever goal in the AHL while veteran defenseman Davis Drewiske drove home his first of the season. But it wasn’t enough against an Albany Devils team who received markers from Seth Helgeson (1st), Brian O’Neill (2nd), Blake Pietila (6th) and Mike Sislo (16th).

Jason LaBarbera played well between the pipes for Lehigh Valley despite giving up the four goals. He stopped a couple of breakaways and several other close-range tries for Albany in giving the Phantoms a chance to mount a comeback. Scott Wedgewood was terrific for Albany in mostly shutting down the Lehigh Valley attack.

Seth Helgeson opened the scoring midway through the first period with a helping hand from Lady Luck when his drive from the left point bounced off the back of a Phantoms defenseman in the left circle to redirect in perfectly to the cage. The drive may have gone off Mark Alt who was former college teammates with Helgeson at the University of Minnesota.

Around that goal, the Phantoms were the better team for almost the entirety of the first period gaining a 12-6 shots advantage and pinning the Devils into their zone for lengthy stretches with their competitive edge. Colin McDonald threw a couple of big hits in the opening frame one of which drew the ire of Reece Scarlett with whom he dropped the gloves. Scarlett was tagged with an instigating penalty and, after initially not reciprocating the interest in the pugilistic endeavors, McDonald realized he had no choice and quickly went on to notch the take-down of the fellow combatant.

The Phantoms came out with the same fire early in the second period and rookie Joe Rehkamp benefited from a smart chip across from TYrell Goulbourne. The rookie from Minnesota found open space right up the middle and offered a perfect snipe from the high-slot off the underside of the cross-bar over the right shoulder of Wedgewood.

The 1-1 tie would last less than a minute though. Albany took advantage of their first power play opportunity of the game and took only eight seconds to do so. Mike Sislo, who leads the AHL with 11 power-play goals, this time recorded a power-play helper as his shot from the left-wing boards was deflected down low by Pietila to put albany back in front at 2-1.

Later in the second period the Phantoms found themselves at a two-man advantage and Albany was able to convert again. This time it was Yardly, Pennsylvania native Brian O’Neill. The reigning AHL Scoring Champ and MVP who had 80 points with Manchester last season buried the tail-end of some quick tic-tac-toe passing for just his second of the season in seven games since being loaned to Albany from the parent New Jersey Devils.

Mike Sislo would convert right in front of the cage early in the third period after a Phantoms turnover in the corner against the always-aggressive Devils pressure. Sislo’s sixteenth trike to extend the lead to 4-1 also pulled him to within one goal of Lehigh Valley’s Petr Straka for the league-lead.

Tim Brent from the right corner would connect with Davis Drewiske in the high slot who buried his first goal of the season to bring the Phantoms back into the game. From there it was a number of quality chances for the Phantoms including several close calls in the closing two minutes with an extra attacker. But the feisty Devils were able to hold off the late Lehigh Valley surge and escape with the win.

Petr Straka returned to action in this Saturday evening affair after missing Friday’s home game with an injury but was unable to extend his lead atop the AHL goal-scoring race.

Albany out shot the Phantoms 31-28. Lehigh Valley was 0-for-4 on the power play while the Devils were 2-for-4. The game concluded the brief two-game season series between the former rivals.

Several Phantoms fans converged on Times Union Center having marked the calendar long in advance for the lone Capital Region appearance of the team. The Phantoms had previously played their home games for five seasons in Glens Falls, New York just 45 minutes up the road from Albany when they were called the Adirondack Phantoms from 2009-2014 prior to their move to the Lehigh Valley region.

Lehigh Valley concludes their busy three-in-three weekend and returns to downtown Allentown on Sunday, January 10 to battle the Binghamton Senators in a 5:05 p.m. collision. Sunday’s game is Star Wars Night as the Phantoms and their fans celebrate one of the most beloved movie franchises of all time. Fans are encouraged to come to the game dressed as their favorite Star Wars characters and will have the opportunity to meet and take pictures with some of the most iconic heroes and villains in film history, including Darth Vader, Stormtroopers and Queen Amidala, with a special appearance from the 501st Garrison.

A limited number of tickets for Sunday’s games are available now at pplcenter.com, by calling 610-347-TIXX [8499] or in-person at the Mealey’s Furniture Box Office at PPL Center [701 Hamilton Street].