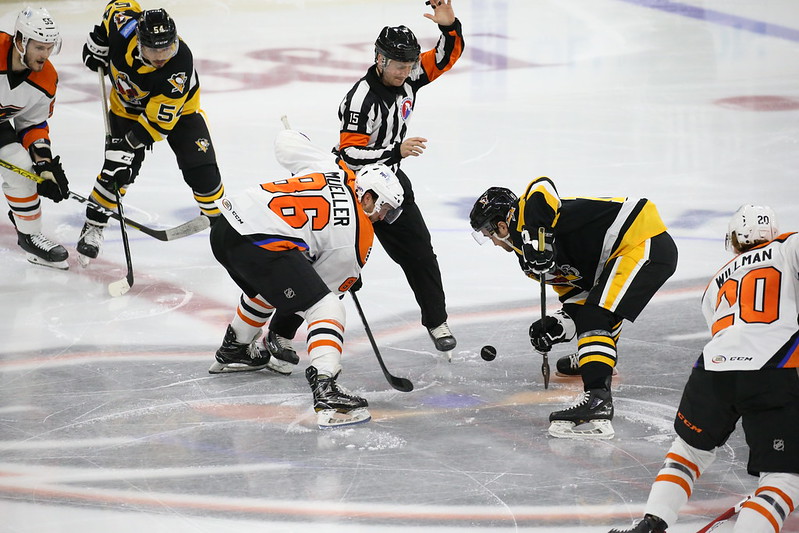 Lehigh Valley, PA – It was a long time coming but the Phantoms returned to PPL Center after a lengthy wait to post a 2-0 win over the rival Wilkes-Barre/Scranton Penguins on Thursday night. Returning defensemen Chris Bigras and Tyler Wotherspoon provided the offense while Felix Sandstrom posted a 21-save shutout in the first Phantoms action in 330 days dating back to March 11, 2020. Not many people were allowed inside PPL Center for the team’s first game in just under a year but the Phantoms were pleased to welcome some front-line workers to enjoy the return of live sports and entertainment at PPL Center.

The game marked the first Phantoms appearance of several rookies including 2020 draft selections Tyson Foerster and Zayde Wisdom. Meanwhile, fan-favorite Samuel Morin returned to Allentown at a new position. The converted defenseman threw his weight around with several hits as a left wing. He also re-took his more familiar spot in front of the goalie when he was stationed at the base of the team’s penalty kill and also the team’s 5-on-6 kill at the end of the game.

Lehigh Valley out shot the Penguins 31-21 and was 4-for-4 on the penalty kill in having the better of the play for much of the game. 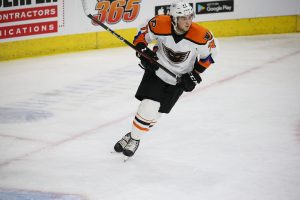 Flyers and Phantoms fans almost certainly had some curiosity regarding the youngest arrivals from the 2020 draft class. Phantoms head coach Scott Gordon was impressed with what he saw out of Tyson Foerster and Zayde Wisdom.

“I thought Foerster made some really nice plays under pressure and did a really good job of protecting the puck,” Gordon said. “It’s funny, both of those guys I felt like I was talking to on every single drill for the first week (of practice). Gradually the discussions as far as where to be and what to do have lessened. And tonight there wasn’t a whole lot to say to either one of them as far as corrections and what I did have to say was minimal. “Wiz” is a big body. Real strong. They’ve got a big future and it’s starting early here. It’s a great jump-start for their careers as far as being able to have the opportunity to learn the professional game before they’re pros.”

Lehigh Valley’s penalty kill looked especially strong in the first period in generating three strong scoring chances while shorthanded with Tanner Laczynski, David Kase and Linus Sandin all coming to close to scoring. Laczynski’s attempt from the right of the cage had Larmi diving backwards with an outstretched arm to barely prevent a goal.

The score was 0-0 after one but the Phantoms were dictating the pace of play and getting the better of the chances while Penguins goalie Emil Larmi was making a number of strong stops to hold back the Phantoms.

The Phantoms also came close early in the second period when Foerster’s feed to rookie defenseman Egor Zamula at center point for a one-timer found the left iron and caromed out.

The Phantoms pushed out of another penalty kill to score their first goal of the game at 8:45 of the second period. Maksim Sushko had just emerged from the penalty box when Kase used his active stick to knock the puck free from a Penguins player on the Phantoms line. Sushko carried up the right wing and showed tremendous patience in waiting for a better option. That eventually came in the form on the hustling Chris Bigras who was trailing. Sushko connected with Bigras whose first blast from the slot rebounded off the body of Larmi. Bigras followed the shot moving to his left and was able to bury the second chance behind the Wilkes-Barre/Scranton netminder for a 1-0 lead. 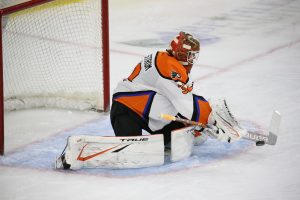 The Phantoms doubled their advantage in the third period at 10:02 off a faceoff win by 34-year-old veteran Chris Mueller who steered the puck over to Max Willman who then dropped it back to Wotherspoon on the blue line to snap a drive that eluded Larmi and found the back of the net.

The Phantoms open the regular season on Saturday at 4:00 p.m. at the Hershey Bears which is the first of four consecutive away games to begin the season. Fans can catch the action on the Phantoms 365 app and 1470-WSAN.

The home opener for the seventh season of the Lehigh Valley Phantoms is Saturday, February 20 at 7:05 p.m. against the Binghamton Devils.