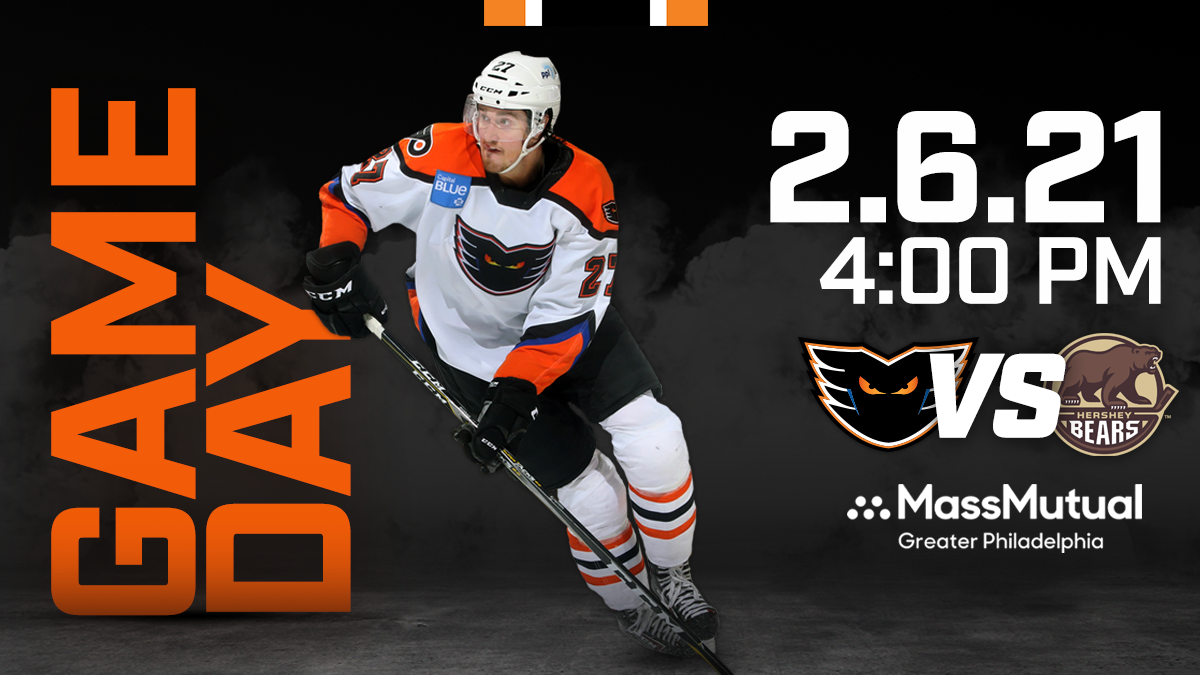 25th Season – Welcome to the official beginning of the 25th season of the Phantoms franchise which began as the Philadelphia Phantoms in 1996. This is the seventh year of the Lehigh Valley Phantoms team which debuted at PPL Center in Allentown on October 17, 2014. It has been nearly 11 months since the Phantoms last played a regular-season game. 332 days ago the Phantoms hosted the Wilkes-Barre/Scranton Penguins at PPL Center on March 11, 2020

Opening Night History – The Phantoms are 17-7-0 all-time in season openers and are 4-2-0 as the Lehigh Valley Phantoms. This will be the second time that the Lehigh Valley team has opened on the road. They also did so in the first-ever game in Lehigh Valley history on October 11, 2014 in a 5-2 win at Wilkes-Barre/Scranton with Chris VandeVelde scoring two goals.
This is the second time the Phantoms have opened at Hershey: October 5, 2013 the Adirondack Phantoms won at Giant Center in overtime 4-3 on a game-winning goal by Brandon Manning assisted by Petr Straka and Jason Akeson.

First Ever – The first game for the Philadelphia Phantoms was October 4, 1996 with a 6-3 win at the Springfield Falcons. Peter White scored the first goal in Phantoms franchise history assisted by Paul Healey at 11:43 of the first period. White went on to score 152 more goals in a Phantoms jersey and remains the all-time leading goal-scorer for the franchise.

Preseason Tune-Up – The Lehigh Valley Phantoms won their preseason game on Thursday, February 4 with a 2-0 decision over the WilkesBarre/Scranton Penguins. Felix Sandstrom posted a 21-save shutout while returning defensemen Chris Bigras and Tyler Wotherspoon provided the offense. The Phantoms out shot the Penguins 31-21 and went 4-for-4 on the penalty kill. It was the first Phantoms game at PPL Center in 330 days.

Wisdom in Youth – Zayde Wisdom can become the youngest player in Phantoms franchise history if he plays in today’s game. The fourth-round selection of the Flyers in 2020 from the Kingston Frontenacs is 18 years and 6 months and 30 days old. That makes him 20 days younger than Derek Mathers when he debuted for the Adirondack Phantoms in March, 2012. He would become the fourth 18-year-old in Phantoms franchise history (Derek Mathers, Nick Cousins and Scott Laughton) and the first-ever with Lehigh Valley.

Teen Sensations – The Lehigh Valley Phantoms have previously had five players debut for the team as teenagers. Four of them are now with the Flyers. Robert Hagg, Nicolas Aube-Kubel, Oskar Lindblom, Isaac Ratcliffe, Joel Farabee are members of that select group. Ratcliffe is currently the youngest with Lehigh Valley having debuted at 19 years, 1 month and 29 days in April, 2018.

Big Sammy Returns – Samuel Morin is back with the Phantoms but this time as forward. Morin has had extremely limited playing time with only 11 combined games in the previous two years due to two knee surgeries. And in his sixth season as a professional hockey player is learning the ropes of playing left wing instead of defense. Morin enters the 2021 season having played 170 career games with the Phantoms over the past five seasons. When he debuts in the regular season he will become the first player to have participated in six different seasons with the Lehigh Valley Phantoms. Morin has played in one game with the Philadelphia Flyers this year on January 31 against the New York Islanders. That was also his 10th career NHL game.

Fond Memories – Tanner Lacyznski is undefeated at PPL Center even before he has played his first pro game. The 23-year-old center from Ohio State won back-to-back games in 2018 when the Buckeyes won the first-ever Midwest Regional NCAA Tournament games held in the Lehigh Valley. Laczynski was a sophomore and was named to the All-Regional team in leading Ohio State to its first Frozen Four appearance in 20 years.

In the Crease – The Phantoms have a trio of goaltenders including returning prospect Felix Sandstrom who primarily played with Reading in the ECHL last year. Eamon McAdam is a native of Perkasie near Quakertown. The Penn State product is the first from near the Lehigh Valley region to become a full-time professional hockey player. Zane McIntyre spent most of his career with the Providence Bruins but last year played for Utica and Binghamton. McIntyre has been friends with Alex Lyon since childhood and the two played at rival high schools in northern Minnesota.

Moving Up – Several familiar names are on Philadelphia Flyers Taxi Squad to open the season. Taxi Squad players have included Andy Andreoff, Samuel Morin, Alex Lyon, Nate Prosser and Carsen Twarynski. Some have made appearances with the Flyers this season as well.

Get Well Soon – Forwards Wade Allison and Isaac Ratcliffe have both had injuries that required surgery and thus remain on the Flyers roster on the injured reserve with hopes that they can play games later this season. Goalie Kirill Ustimenko had hip surgery and is unavailable for the rest of the season.

Upcoming – The Lehigh Valley Phantoms continue their opening four-game road stretch with a Wednesday clash at the Binghamton Devils in Newark, N.J. The Phantoms return to Hershey next Sunday for a 1:00 Valentine’s showdown against the Bears. Lehigh Valley’s home opener is Saturday, February 20 at 7:05 p.m. against the Binghamton Devils at PPL Center.