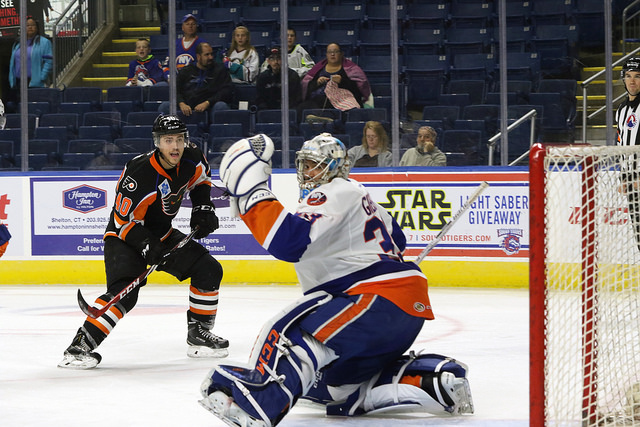 Bridgeport, CT – Jordan Weal is having a big weekend. After two more goals plus a helper in Saturday night’s contest at Bridgeport the talented center has notched seven points in just two games. But his continued productivity wasn’t enough in Lehigh Valley’s comeback efforts as the visiting Phantoms fell just short at the Bridgeport Sound Tigers 5-4.

Former Sound Tigers captain Colin McDonald also scored a pair against his ex-team including a deflection goal with 63 seconds remaining that pulled the visitors to within one. The Phantoms overcame a second-period deficit of 3-1 to equalize at 3-3 but ran out of time in their efforts for a second two-goal comeback. Bracken Kearns struck for two while young prospects Michael Dal Colle and Josh Ho-Sang each tallied single lamplighters. 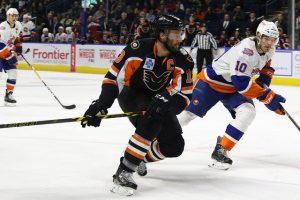 A parade of penalties impacted the Phantoms in the opening frame as the host Sound Tigers were able to take advantage of back-to-back 5-on-3’s. Bracken Kearns converted on the initial two-man at 12:33 and then it was Ho-Sang’s turn just 63 seconds later recording his first professional goal by powering a left-circle drive through goaltender Alex Lyon.

Danick Martel left the game late in the first period with a lower-body injury after a knee-on-knee collision with Bridgeport’s Kyle Burroughs. Martel was helped off the ice and did not return. No update was available on his status. Burroughs was assessed a five-minute major penalty and a game misconduct.

Lehigh Valley recorded their response just six seconds into their five-minute power play on a bouncer in the slot that was deposited home by Weal. But the Phantoms were unable to take advantage of the remainder of their long stretch on the advantage and trailed 2-1 at the first break.

Bridgeport extended the lead to 3-1 in the second period with Connor Jones sliding his breakaway attempt around the poke-check attempt of Lyon at 7:52. But Weal pulled the Phantoms back to within one just seconds later on his laser from the left circle off the far post past netminder Christopher Gibson. 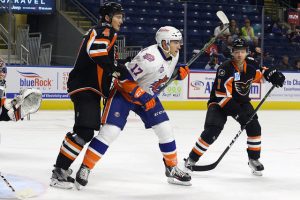 Then it was Travis Sanheim’s center-point drive was smartly chopped down by McDonald in the low slot for a bouncer through Gibson to even the score 3-3 at 13:35 into the second period.

Bridgeport took the lead for good just over seven minutes into the third period on an interception from the left circle by Kearns that he buried.

At 10:47 Michael Dal Colle was sprung free up the right-wing on a stretch pass by Scott Mayfield for a 2-on-1. Dal Colle took the shot himself and backhanded a mid-air rebound into the net after his initial shot was deflected off he glove of Lyon.

Lehigh Valley pulled back to within a goal with 1:03 remaining when Will O’Neill’s shot from the left point to the short side was deflected off of McDonald’s backhand in mid-air for a goal over the far shoulder of Gibson. Weal pushed the puck back to O’Neill to begin the play thus securing Weal’s seventh point of the weekend. But the Phantoms’ comeback simply ran out of time allowing Bridgeport to escape with the 5-4 win. 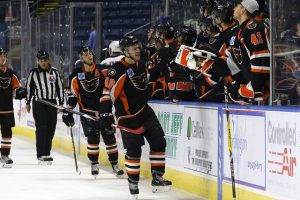 The Phantoms record moves to 2-2-1 on the season. Lehigh Valley is 2-0-1 when playing opponents other than Bridgeport. The Sound Tigers improved to 4-2-0 with the victory.

Bridgeport out shot Lehigh Valley 35-26. The Phantoms went 2-for-5 on the power play and now have five man-advantage markers on the weekend. Bridgeport was 2-for-4 on the power play with both of their strikes coming with a two-man advantage. The game was the second of eight meetings on the season between the Atlantic Division foes.

Lehigh Valley plays the middle-match of their five-game road-trip on Sunday at Hershey with a 5:00 start-time. Broadcast coverage begins at 4:20 on NewsRadio 790-WAEB and the iHeartRadio app and website.