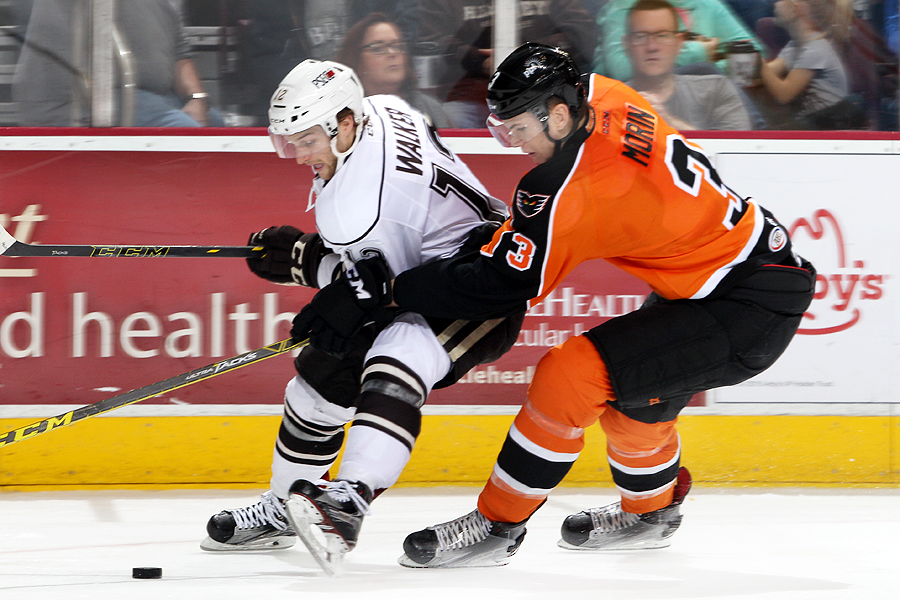 Aube-Kubel and McDonald Score for Phantoms

Hershey, PA – Trailing by a goal midway through the third period, Greg Carey cruised up the left-wing on a 2-on-1 and offered an almost-perfect backhander in an effort to even the score. But his potential equalizer rang of the far iron and bounced away allowing the Hershey Bears to hang on for a 3-2 decision in the first meeting of the season between the Keystone State Rivals.

Anthony Stolarz was solid between the pipes with a 30-save performance that include four or five of his best stops of the young season. Young prospect Nic Aube-Kubel scored his first goal of the season and third of his career while the captain, Colin McDonald, tallied his fourth goal of the campaign and third of the weekend. The game also saw a couple of third-period fights as the long-time foes, who have met more than 200 times in their 21-years as rivals, set an early tone in the this season’s rivalry opener.

After a couple of magnificent saves by Anthony Stolarz in the opening minutes of the game, Lehigh Valley would commence the scoring with Nic Aube-Kubel’s first of the season. Shortly after a faceoff win, T.J. Brennan would slide the puck over to Will O’Neill whose left-point offering down low perfectly connected with Aube-Kubel for the chip home.

But less than three minutes after that conversion, the Bears would roar back with Brad Malone keeping it in himself on his 2-on-1 opportunity and sniping his third of the year over the right shoulder of Stolarz.

Travis Boyd would wheel around on the left-wing boards to offer a perfect pass to talented Jakub Vrana hovering in the slot who was successful on his fifth goal of the season off the left post and in. That conversion at 5:29 into the second provided the hosts with their first advantage of the evening at 2-1.

The Phantoms withstood a continued Hershey charge and then forged a tie at 9:35 into the period. Being bumped off his skates didn’t stop Greg Carey from staying with the puck. His second-effort from behind the net while on his knees resulted in a perfect pass to Colin McDonald in the high slot who buried his fourth goal of the season past the glove of Vitek Vanecek.

Penalty trouble would befall the Phantoms at the end of the second period. A high-sticking against Chris Conner was shortly thereafter followed by a hard boarding penalty assessed to Samuel Morin who ran into the numbers of Travis Boyd. Lehigh Valley used their timeout in efforts to stall the Hershey 5-on-3 but the Bears eventually took the lead for good with Jakub Vrana’s cross-ice feed finding Paul Carey on the back-door for the tap-in.

Morin was challenged by scrappy Liam O’Brien in the third period who was taken quickly by the bigger defenseman in expedient fashion. The two were assessed roughing and unsportsmanlike minors. Later in the period, Cole Bardreau rumbled with Nathan Walker in a spirited bout involving more undersized pugilists resulting in both being tagged with five-minute fighting majors.

Hershey out shot the Phantoms 33-24. The Bears were 1-for-5 on the power play while the Phantoms finished at 0-for-5 after having successfully converted for five power-play markers in the previous two games combined.

Round 2 of the 12-Game rivalry series will be a return visit to ChocolateTown for the Phantoms on Sunday, November 13. The Bears’ first excursion to Lehigh Valley will take place on Friday, December 2.

The Phantoms are three games into a five-game road-swing that continues on Wednesday with a morning game at the Hartford Wolf Pack and then concludes on Friday night at the Providence Bruins. Wednesday’s game at 11:00 a.m. can be heard on 1470-WSAN and the iHeartRadio app and website. Listen to the Air Products Countdown to Faceoff beginning bright and early at 10:20.