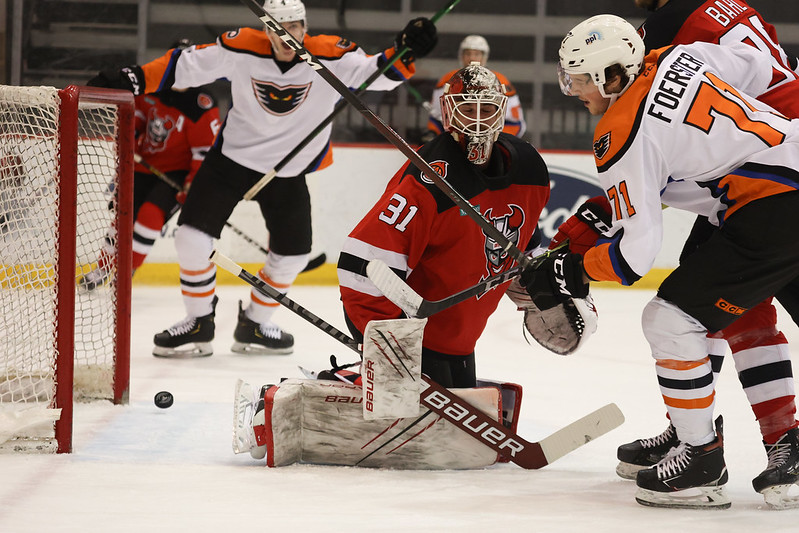 Andy Andreoff Also Scores Twice in His First Game Back

Newark, NJ – Tyson Foerster (7th, 8th) scored two goals for the third time in the last five games to lead the Phantoms to a 4-2 win at the Binghamton Devils in Newark, NJ on Friday night. Andy Andreoff (1st, 2nd) also scored a pair of goals for Lehigh Valley in his first game back with the Phantoms this season. That included the game-winner at almost the midway mark of the second period as well as the empty-netter with 50 seconds left to seal the W.

Both of Foerster’s goals came in the first period as the Phantoms took a 2-1 lead after firing a season-high 17 shots in a period. Lehigh Valley finished with a season-high 39 shots in the game. 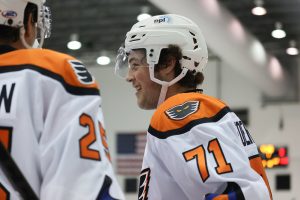 Foerster’s first goal came on the power play after a speedy entry into the zone by Egor Zamula, who had two assists in the game. Chris Mueller winged it across to Foerster who was ready to put it in on the back door for a 1-0 lead.

Reilly Walsh countered just over two minutes later with his own power-play tally for 1-1 tie.

But Foerster did it again from the left circle with O’Reilly this time connecting all the way across for the wide-open teenager to bury his second of the game with under a minute remaining in the period.

A.J. Greer scored just 65 seconds into the second period going over the left shoulder of Zane McIntyre with his power-play snipe to forge another deadlock again at 2-2. 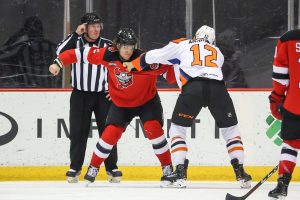 Andy Andreoff tipped in the go-ahead goal on a right-point shot by Wyatte Wylie. Michael Vukojevic took exception to Andreoff’s success and dropped the gloves with the newly arrived veteran right after the goal was scored in what became a hard fight while the Phantoms had taken a 3-2 lead.

Zane McIntyre made several strong stops to preserve the one-goal lead throughout the third period before Wotherspoon intercepted an entry-attempt that led to Andy Andreoff’s line-drive empty-netter bullseye from behind the blue-line with 50 seconds remaining.

Lehigh Valley improved to 5-0-2 against the Devils and 13-4-2 overall. The Phantoms have points in six of their last seven games at 5-1-1. This was the first of a three-game series between the Phantoms and Devils with a rematch Saturday night at PPL Center and then the finale back in Newark on Monday evening. 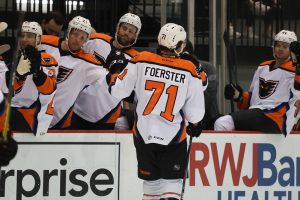 Tickets are on sale for Saturday’s game and remain available for all upcoming Phantoms home games at phantomshockey.com