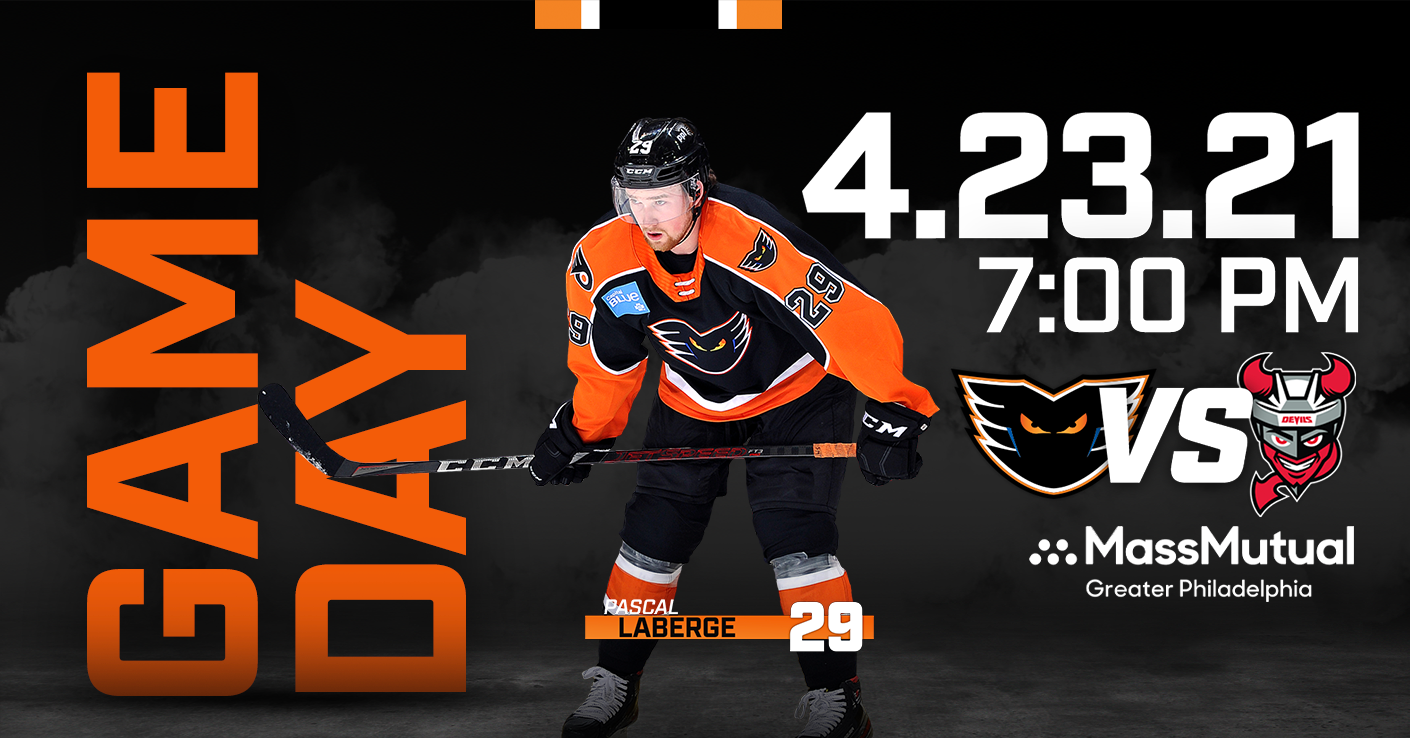 Tonight’s Game – The Lehigh Valley Phantoms travel to Newark, NJ to take on the Binghamton Devils in the first of three consecutive games between the two teams. This is the 20th game of the season for the Phantoms and their seventh against the Devils. Lehigh Valley is 4-0-2 against Binghamton this year but the Devils took the most recent meeting on April 5 with a 2-1 shootout win in Newark.

Last Time Out – The Phantoms returned to game-action for the first time in 16 days on Wednesday night and were dealt a 6-1 loss at PPL Center by the Hershey bears. It was the worst loss of the season for Lehigh Valley and equaled the most goals allowed in a game. Ryan Fitzgerald (10th) scored on the power play for the team’s lone marker. Cal O’Reilly recorded his 495th career assist. Connor McMichael paced the Hershey attack with two power-play goals and one assist while Cameron Schilling had three assists. Hershey went 3-for-7 on the power play representing only the second time this season for the formerly top penalty-kill in the league to surrender more than one power-play goal in a game.

Comeback Kids! – The Phantoms have gone 5-4-1 in games in which they were trailing at the second intermission. That is easily the most comeback wins in the league and they are the only team with a winning record when trailing after 40 minutes. Additionally, the Phantoms are 3-0-1 when tied after two periods giving them a combined record of 9-4-2 when trailing or tied at the second intermission.
Almost half of the team’s games have gone to overtime; 9 out of 19. Lehigh Valley is 5-2 in overtime decisions and 1-1 in shootouts.

Get Your Tickets, Here!! – The Phantoms and PPL Center are pleased to announce we are “Back to Live.” The Phantoms are now permitted to allow 2,500 fans per game. Limited tickets for all upcoming Phantoms home games are available at phantomshockey.com. The Phantoms have six home games remaining on the schedule including Saturday, April 24 and Saturday, May 1.

McIntyre Thrives in The Valley – 28-year-old goalie Zane McIntyre is not only a new Daddy, he is also having a tremendously successful debut campaign with the Phantoms. McIntyre is 8-1-2 with a 2.19 goals-against avg. that rates 6th in the AHL and 3rd among active AHL goaltenders. His .926 save percentage is 4th best in the AHL. The former Mike Richter Award winner at the University of North Dakota has played in 195 career AHL games over six seasons. He spent first four years with Providence in a stretch that also included an AHL All-Star Classic appearance at PPL Center in 2017.