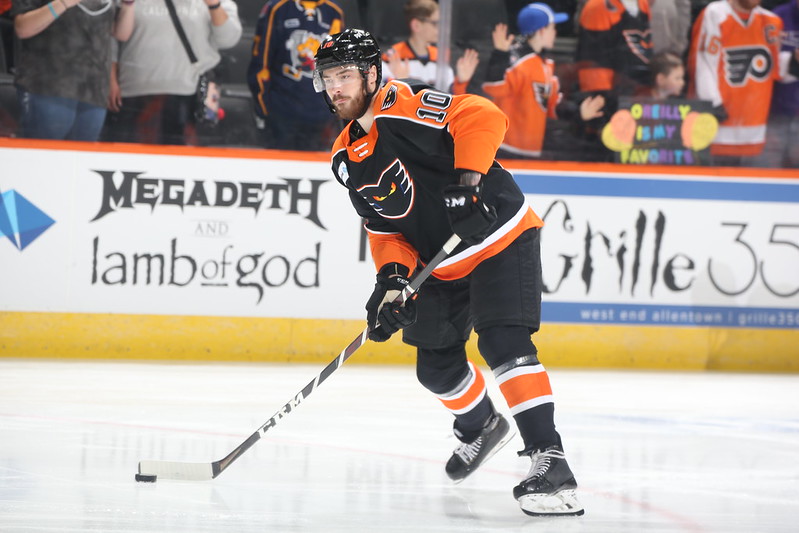 On Wednesday, the Flyers announced the signing of center/winger Tanner Laczynski to a two-year contract with a $762,500 average annual value (AAV) at the NHL level.

Year one is a two-way contract that would pay $750,000 (NHL minimum) on the Flyers’ NHL roster and a lower rate if Laczynski plays in the American Hockey League with the Lehigh Valley Phantoms. Year two is a one-way deal with a guaranteed $775,000 salary whether he’s in the NHL or the AHL.

For Laczynski, the contract represents an opportunity to show he can stay healthy and earn a regular NHL job. He’s always been a player with faith in his own ability to fit into any lineup in whatever role he’s asked to be. At lower levels, he’s adapted from being anything ranging from a two-way role player in the bottom six to someone expected to carry more of an offensive role either at center or on a wing.

He did this successfully in college at Ohio State. He did it internationally, beating out more heralded prospects to earn a spot on the gold-medal winning Team USA squad at the 2016-17 World Junior Championship.

Laczynski’s confidence was such that the Flyers’ 2016 sixth-round pick (169th overall) turned down an opportunity to turn pro following his junior season in order to play his senior year before signing with the Flyers.

Overall in his college career, Laczynski averaged more than a point per game. He posted 143 points (48 goals, 95 assists) in 138 games. As a senior, he served as the Buckeys’ alternate captain in his senior year and led the team in scoring with 34 points, which tied for 3rd in the Big Ten Conference, and 23 assists, which ranked second in the conference. In fact, Laczynski led his team in scoring in two of his last three seasons and was named First Team All-Big Ten in 2018, a two-time Academic All-Big Ten selection and a three-time Ohio State Scholar-Athlete honoree.

After turning pro, Laczynski showed the ability to move around the lineup and start making an offensive impact as a rookie in the AHL for the Phantoms in 2020-21. He posted 10 points in 14 games (six goals, four assists) including a torrid run from March 21 to 31 that saw him rack up six goals in a five-game span and earn his first NHL recall.

The stretch was highlighted by a hat trick against the Binghamton Devils on March 26, 2021. In that game, Lacynski scored one goal apiece at 5-on-5, on a power play and then shorthanded. The shortie was a highlight-reel caliber goal that saw the forward deke to the backhand, pull the puck between his legs and flip it over the goaltender’s glove as the netminder bit and went post-to-post in the opposite direction.

Here's a better look… Laczynski dekes like he's going backhand, pulls the puck between his legs and flips it home for a SHG, a hat trick and a 3-2 Phantoms' lead. https://t.co/wphj4rg3eR

At the start of April 2021, the Flyers recalled Laczynski for his first opportunity in the NHL. The Flyers head coach at the time, Alain Vigneault deployed Laczynski in a fourth-line role. The player dressed in six games.

That’s when the injuries started. Laczynski’s rookie pro season ended early due a torn labrum in his right hip. After undergoing season-ending hip surgery, Laczynski spent the summer of 2021 rehabbing. He reported feeling much better, although not quite 100 percent yet.

Unfortunately, very shortly thereafter, Laczynski got injured again. This time, he tore the labrum in his left hip. Another surgery and five-plus months of a now all-too-familiar rehab regimen followed.

After he was finally cleared to play again, Laczynski joined the Lehigh Valley lineup on Feb. 19, 2022. Although understandably rusty and working his back back into game shape, Laczynski played off sheer adrenaline upon his return. He recorded points in four of his first five games (1g, 3a) for head coach Ian Laperriere’s team.

Following that, Laczynski struggled for a few weeks. Laperriere said that he was neither surprised nor alarmed as the player’s performance and energy level ebbed. It was not due to any drop in effort or work ethic.

That was something Lappy referenced multiple times regarding injured players returning.
Laczynski had surgery in Sept, played first games in Feb.
"His season is only here" (gestures hand chest level) "and he's trying to catch up to guys who are already here" (hand at his eyes)

Finally, roughly a month after returning from the second hip surgery, Laczynski started to look more like the player who’d impressed the previous year with both his offensive and two-way games at the NHL level. Laczynski rattled off a three-game goal streak (March 12-19), generated higher frequency and better quality puck touches, and generally seemed to have more stamina over the course of games. Overall, in an 11-game stretch, Laczynski posted nine points (5g, 4a) and he had seven games where he registered anywhere from three to seven shots on goal.

As a result, Laczynski earned his second NHL recall. It turned out to be brief, however, as he appeared only in one game for the Flyers — a home loss to the New York Rangers on April 13 — and skated just 9:27 over 16 shifts for interim head coach Mike Yeo. The player was then returned to Lehigh Valley.

After returning to the Phantoms, Laczynski’s play down the stretch was inconsistent amid a flurry of closely spaced games. Some games were effective, such as a five-shot, two-assist effort in a 3-2 shootout loss to Providence on April 16. Other games were more of an uphill effort both for Laczynski and the Phantoms as a whole. The encouraging news, though, was that Laczynski made it through the rest of the 2021-22 season without any injury setbacks.

On June 1, Laczynski celebrated his 25th birthday. As a player with only 48 combined games of AHL and NHL experience due to the pandemic and then the dual hip surgeries, he did not have much leverage as he became a first-time restricted free agent this summer. Thus, the player’s agent negotiated a two-year “prove it” deal with the Flyers.

Come training camp, Laczynski will compete for an NHL roster spot on new head coach Ian Laperriere’s lineup. His case is helped by his ability to play different forward positions and by his potential to be a Swiss Army knife type of player who can adapt to a fourth-line role or to eventually move into the top nine.

From the Flyers standpoint, the fact that Laczynski currently remains waivers exempt (as does fellow injury-riddled prospect Wade Allison) is helpful in case he is a victim of the numbers game near the end of training camp. Neither Laczynski nor Allison would have to clear waivers to be sent to the Phantoms. That is not the case for left winger Isaac Ratcliffe.

Waiver exemption may be the one and only benefit to all the time Laczynski and Allison have missed due to assorted injuries their first two pro years as well as the belated and shortened 2020-21 NHL and AHL seasons caused by the pandemic. On the other hand, there’s at least a decent chance that one or both of Laczynski and Allison would already be NHL players by now if not for all the physical setbacks.