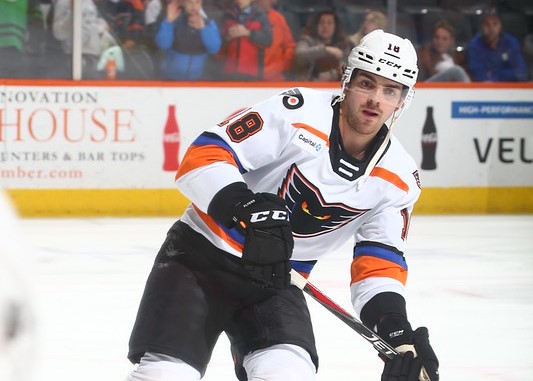 On Monday, the Flyers announced that forward Jackson Cates, a restricted free agent, has re-signed with the organization. The player agreed to a one-year, two-way contract.

Signed by the Flyers last spring out of the University of Minnesota-Duluth, the older Cates brother played in four NHL games late last season and 11 NHL games in a fourth-line role in 2021-22 (one goal, zero assists).

Additionally, Jackson Cates dressed in 38 games for the Phantoms this season, playing a fourth line and penalty killing role.

Cates notched a pair of breakaway shorthanded goals for the Phantoms, which represented his only tallies of the season for the Flyers’ AHL affiliate. Overall, he chipped in 10 points. On March 5, Cates had to be stretchered off the ice to a waiting ambulance after a frightening crash into the end boards. He was hospitalized for a couple of days and then released.

Cates did not play again after the mishap. However, he fully recovered.

Cates has trained this summer with younger brother Noah, who impressed in 16 NHL games with the Flyers after completing his college career at Minnesota-Duluth.

Jackson Cates will turn 25 on Sept. 26. This offseason, he was a 10.2 (c) free agent, meaning that he was ineligible for offer sheets from other organizations.

Cates remains waiver exempt heading into the 2022-23 season. If he does not earn an opening-night NHL roster spot, he can be sent directly down to the Phantoms without being subject to a potential claim by another team.