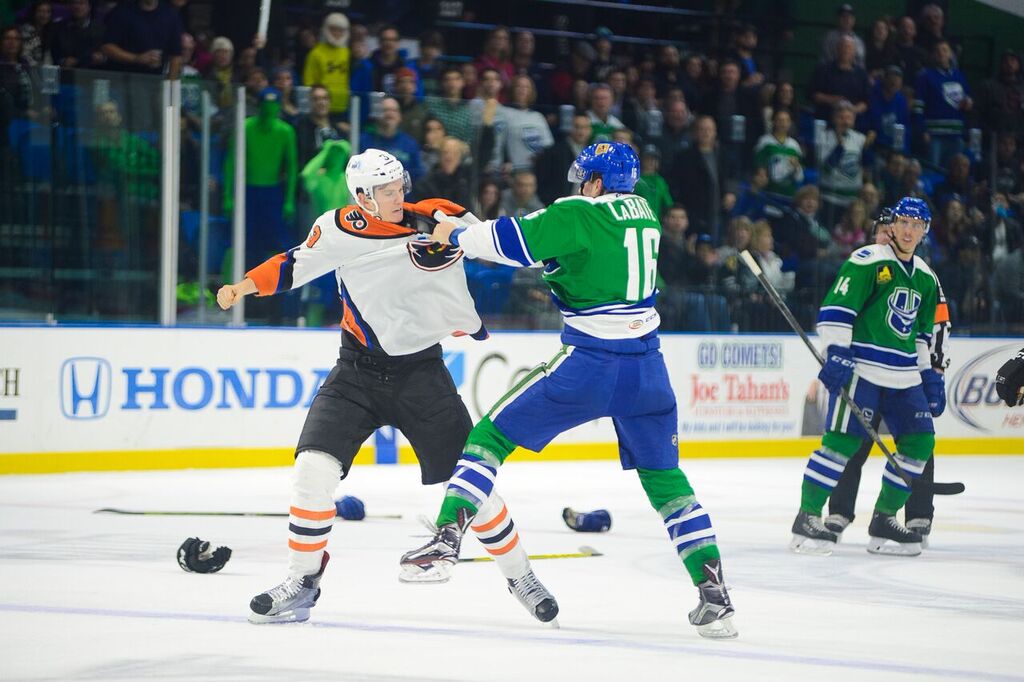 Utica, NY – The Phantoms wrapped up their four-game road swing in Utica, NY and ran into a determined Comets squad in a 7-1 setback on Thanksgiving Eve. After playing well for the opening three games of their road swing coming on consecutive days this past weekend, the road-trip finale did not go as smoothly for Lehigh Valley. 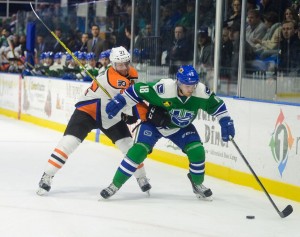 Former Phantom Blair Jones enjoyed a two-goal performance against his former team on his way to #1 Star of the Game honors. Aaron Palushaj scored his fifth of the season for Lehigh Valley’s lone tally coming on a nifty interception by Danick Martel but it was not in time to help spark a comeback effort.

One player who did his part to try to get the Phantoms back on track was gigantic rookie defenseman Samuel Morin who dropped the gloves in the second period with fellow rookie Joseph LaBate. Morin decisively won the bout but his pugilistic efforts were similarly unable to push the Phantoms back into the game. It was Morin’s second career pro fight and the first for LaBate.

Anthony Stolarz started for the Phantoms and surrendered one goal in the first period. He made way for Martin Ouellette who started the second period. Stolarz did not return to the game and there was no update available as to his status or reason for departure.

Trailing 1-0 in the first period, the Phantoms had several early opportunities to turn the game into a very different night. Lehigh Valley out shot Utica 12-9 in the opening 20 minutes which included a backhand breakaway from Pavel Padakin and two or three solid chances from Tyrell Goulbourne.

But Utica held their ground and then came on stronger in the second period with a four-goal effort including three goals in the closing five minutes of the frame as things kind of snowballed against the Phantoms. 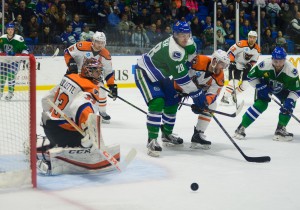 Then it was three goals rapid-fire style in the closing moments of the second scored by Alex Biega, Wacey Hamilton and Blair Jones.

Jones raced in for an early third-period breakaway for his second of the night. After Palushaj’s goal midway through the third narrowed the margin to 6-1 it would be Joseph LaBate scoring his first career professional goal. Earlier in the game he had lost his heavyweight bout against Morin.

Ouellette played in eight games for the Phantoms last season but this was his first appearance for Lehigh Valley of the 2015-16 season after serving as a backup net-minder on several occasions. He was charged with six goals on 24 shots but certainly this setback was not entirely on him. Joe Cannata recorded 27 saves on 28 shots for the win.

Petr Straka had his six-game goal streak come to a close. He fell just one shy of the all-time Phantoms franchise record of seven set by Shawn McCosh in 1996-97 and equalled by Mike Maneluk in 1999-2000.

AHL Plus/Minus leader Mark Alt was a -1 for the game to move his season rating to +12 which dropped him out of the league lead.

The game was the first of four between the Phantoms and Comets this season. Lehigh valley ventures right back to Utica next Wednesday night for an opportunity to avenge the humbling setback. 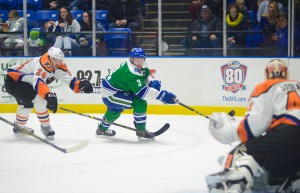