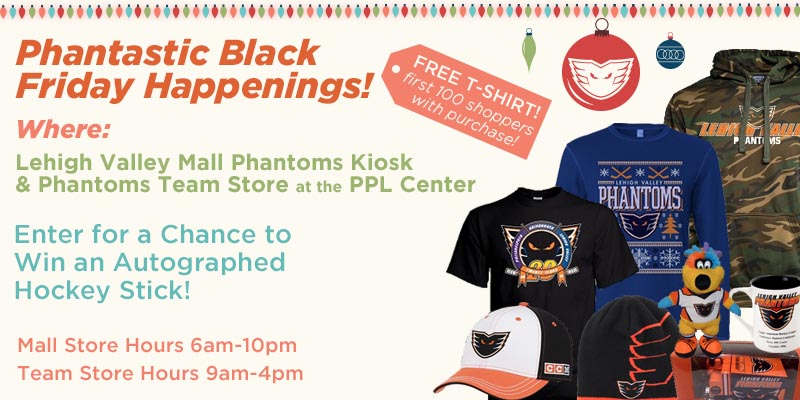 Lehigh Valley, PA – Make the Lehigh Valley Phantoms part of your holiday season with a host of Phantastic Holiday Happenings! 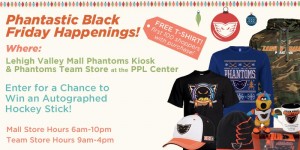 It all starts on Black Friday (November 27) when the Phantoms will be giving away a FREE shirt to the first 100 shoppers who make a purchase at either the Phantoms kiosk at Lehigh Valley Mall or at the Phantoms Team Store at PPL Center. Shoppers will also have the chance to win an autographed hockey stick along with prizes from Reebok and J. America Sportswear.

The holiday festivities then carry into December when the Phantoms will host Totally Terrific Tuesdays at PPL Center. For three Tuesdays (December 8, 15 and 22) during the holiday season, fans will have the opportunity to meet and get pictures with meLVin (4:30 – 5:00 p.m.) as well as join our renowed Chef Ken Hall who will be demonstrating some tried and true holiday favorites. Totally Terrific Tuesdays will take place on the concourse level near the Phantoms Team Store at PPL Center.

Then, on Saturday, November 28, the Providence Bruins invade downtown Allentown. Get up close and personal with your favorite Phantoms that evening with a post-game autograph session with Phantoms players accompanied by a team poster giveaway. Puck drop for both nights is scheduled for 7:05 p.m. Be sure to get your tickets now by logging on to pplcenter.com, by calling 610-347-TIXX (8499) or by visiting the Mealey’s Furniture Box Office at PPL Center (7th & Hamilton).