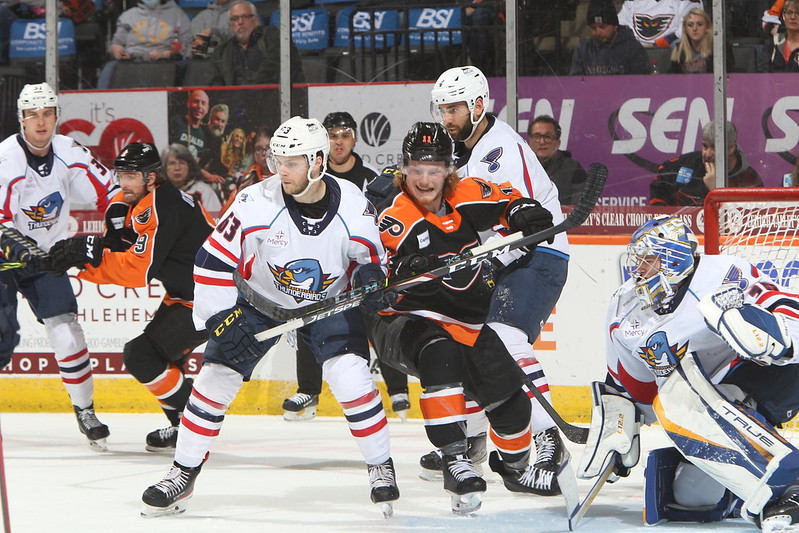 Lehigh Valley, PA – A third-period surge of goals for the Springfield Thunderbirds made the difference as a tight 1-0 game ballooned to a 5-0 difference and ultimately was the final score on Tuesday night at PPL Center. Joel Hofer picked up the shutout performance with 26 saves.

Lehigh Valley (28-31-15) was engaged in a hard goaltenders’ duel through the first two periods. The Phantoms were down 1-0 early but it stayed at that score all the way to the second intermission. And the Phantoms had limited the visitors to just 12 shots in the first 40 minutes as well and enjoyed a 19-12 shots advantage.

But Springfield (42-24-9) picked up the slack in the third and offered eight quick shots on goal to strike three times in barely more than six minutes of the final frame. The T-Birds tacked on another a few minutes later with Mattew Peca’s pair of goals leading the attack in the 5-0 decision.

Lehigh Valley took its first regulation loss at home since March 5 and ended a nine-game home-ice point streak as well as a six-game overall point streak.

The Phantoms largely had the better of the play to start and held an 8-4 shots advantage in the first period. But Springfield converted 3:35 into the game on their first shots of the night. Matthew Peca picked up the rebound of a Dakota Joshua wraparound try off the pad of Nagle for the 1-0 advantage. After that, the T-Birds didn’t pick up another shot on goal for over 12 minutes. 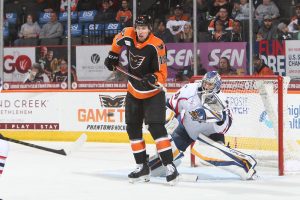 Charlie Gerard had an intercept in the Springfield zone that he turned into a breakaway just two minutes after the opening goal. Gerard was denied in the glove of Joel Hofer but drew a slash and a power play as well. The Phantoms had a couple chances at Hofer on the man advantage but couldn’t break through.

Lehigh Valley again had the shots advantage into the second period with an 11-8 margin. Some buzzing rushes into the zone included a hard shove on the forecheck by Linus Sandin to win the puck. Two minutes earlier was new defenseman Adam Karashik stepping up to the endboards to deliver a crushing forecheck that got the crowd going.

The T-Birds had renewed energy in the third and lit the lamp on a pair of point-shots to open a 3-0 lead with Brady Lyle (5th) and Joshua Wesley (5th) both scoring to the upper-right corner at 0:59 and 4:33 into the final frame.

Then it was Joshua elevating the rebound of his own chance in tight from the right of the cage. His second crack at it on the power play and immediately off the pad of Nagle found the back of the cage at 6:07 into the third and suddenly Springfield was up 4-0.

Matthew Peca scored his second of the night set up by Sam Anas at 10:24 into the third to close the scoring. Mitchell Balmas for Springfield raced out with a breakaway a few seconds later and was slashed on the play for a penalty shot but Nagle potentially got a piece of the backhand try to nudge it upstairs.

Isaac Ratcliffe zipped in with less than a minute left to try to break the shutout but Hofer’s 26th save off the right pad was among his strongest of the evening to finish off the blank sheet.

The Phantoms have two games remaining in the regular season with a Wednesday night matchup against the Cleveland Monsters at PPL Center followed by the Saturday night season finale against the Wilkes-Barre/Scranton Penguins on Star Wars Night and also featuring a live Post-Game Jersey Auction.