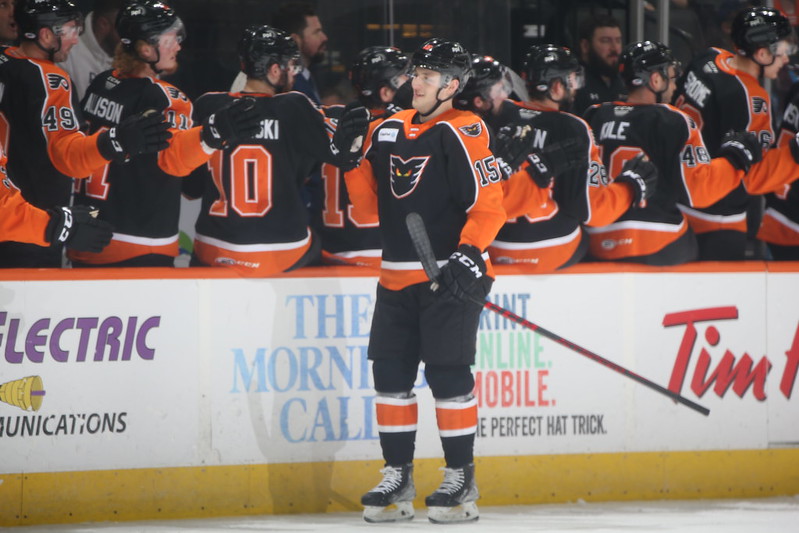 Lehigh Valley, PA – Maksim Sushko (10th) scored for a third straight game this week but Cory Schneider stood on his head for the Bridgeport Islanders to backstop a 2-1 overtime win for the visitors at PPL Center on Friday night.

Austin Czarnik (12th) scored the winner in the extra period on a setup by Otto Koivula who had evened the count earlier in the contest.

Lehigh Valley poured on a 36-shot attack at the NHL veteran of over 400 games, Schneider, but could only get one into the back of the net on Sushko’s tally late in the first period. Schneider’s effort included 21 consecutive saves in a second-period barrage in which the Phantoms equaled their season-high for shots in a period. Schneider had just had a 42-save effort against the Phantoms last Sunday in Bridgeport. 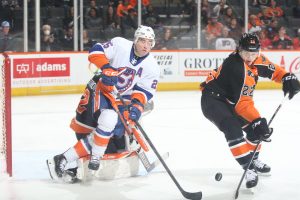 Sushko put the Phantoms ahead with exactly one minute remaining in the first period on the rebound of a sharp-angle shot from Max Willman in the corner. The sneaky drive caught Schneider off-guard and gave Sushko a strong opportunity from between the circles. Sushko’s quick putback was kicked out off the left pad of Schneider but Sushko had the puck again and this time would put a backhander around the right pad of the Islanders’ backstop to give the Phantoms a 1-0 lead at the first break. Lehigh Valley had raced out to a 7-0 shots advantage to begin the game and led in shots 10-4 at the first intermission.

Kyle MacLean briefly appeared to have drawn first blood for the Islanders with 6:!4 remaining in the first period when he knocked in the rebound of a shot from the right circle by Jeff Kubiak that bounced off the far post and came back through the blue. But MacLean scored off of his skate. He tried to get a piece of the puck with his stick before it crossed the line but was unable to do so. The call on the ice was no goal due to a kicking motion and that decision was upheld upon video review to keep the Islanders off the board.

The Phantoms continued to pour it on in the second and, at one point, held a 31-12 shots advantage with the Islanders getting very few quality chances. But Schneider gave his team a chance with a number of sensational saves holding the Phantoms back. Adam Johnson was denied on a breakaway. And Cal O’Reilly’s bid on a 2-on-1 with Garrett Wilson was ticked off the right pad of Schneider and then off the post.

Shortly after O’Reilly’s close call, Bridgeport emerged with a 2-on-1 of their own with Simon Holmstrom connecting at the net-front with Koivula who slammed in his 12th of the year with 3:41 remaining in the second to forge a 1-1 tie.

Bridgeport surged back in the third period with more consistent play and better scoring chances but Felix Sandstrom was on top of his game and made some strong stops of his own to keep the game deadlocked.

The Islanders won the opening faceoff to begin overtime and Czarnik scored the game-winner just 26 seconds in on a feed across the slot from the bottom of the right circle by Koivula.

The Phantoms return to PPL Center to conclude their three-game homestand with a Saturday night engagement against the Providence Bruins.