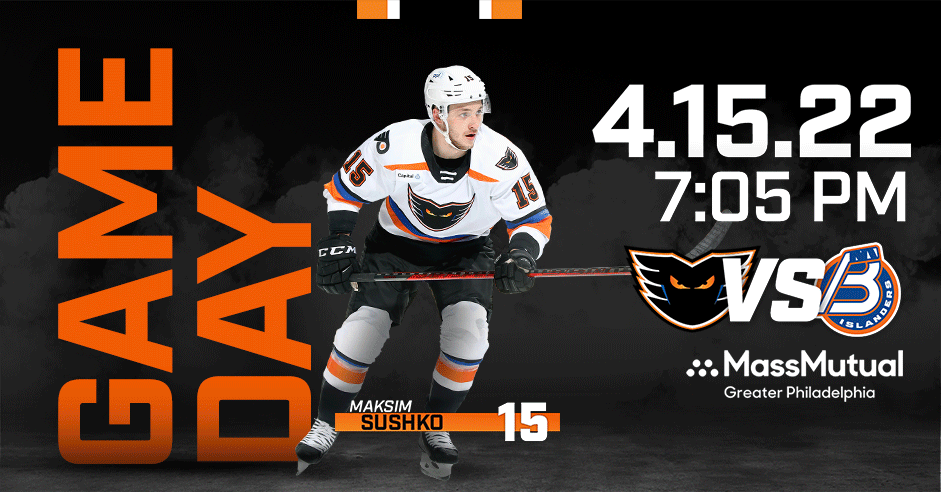 It’s a Phantoms GAMEDAY presented by MassMutual with the Bridgeport Islanders arriving to PPL Center to complete the season series between the two Atlantic Division foes. The Lehigh Valley Phantoms are in the second game of a three-game homestand and are 2-3-0 against Bridgeport this season.
Lehigh Valley (27-30-11) is playing game 69 of the season and there are 8 games remaining including tonight with six of those games in Allentown.
Tonight’s game is critical in the late-season playoff chase with the Phantoms trying to catch or pass Bridgeport and Hartford for the division’s final postseason spot.

LAST TIME
The Phantoms broke through with a pair of goals in the third period against Pheonix Copley for a come-from-behind 2-1 win on Wednesday night against the Hershey Bears at PPL Center. An errant pass resulted in a turnover that Alex Kile (4th) converted into a tying goal in the third period. Maksim Sushko (9th) scored the winner with 8:31 left on a play that was initially ruled No Goal but was changed after the officials consulted video review. Lehigh Valley largely dominated play with a  38-22 shots advantage as they improved to 6-0 against Hershey at PPL Center.

GETTING A LOOK WITH THE BIG CLUB
Philadelphia recalled three Phantoms players for Wednesday night’s game against the New York Rangers: goalie Felix Sandstrom, forward Tanner Laczynski and defenseman Egor Zamula. Sandstrom played well in his second career NHL game in a 4-0 loss. Laczynski played in his first NHL game of the season after only having joined the Phantoms’ lineup in February following hip surgery during training camp in September. It was Laczynski’s sixth career NHL game. Zamula played his second NHL game of the season and the fourth of his career.
Sandstrom and Laczynski were returned to Lehigh Valley on Thursday while Zamula has remained on the Flyers’ roster.

BRIDGEPORT ISLANDERS
Bridgeport (29-28-11) is led by AHL veteran Chris Terry who had his recent six-game goal streak snapped. Terry has scored 28-26-54. Phantoms’ alum Andy Andreoff is third on the B-Isles with 17-23-40 including a goal on Sunday against the Phantoms. Popular former Phantom Cole Bardreau has scored 13-11-24 including three shorthanded goals but has been out recently with an injury. The Phantoms are 2-3-0 against Bridgeport entering the last game of the season series. NHL veteran of over 400 games Cory Schneider is 3-0-0, 1.33, .957 against the Phantoms. Head coach Brent Thompson is the father of Buffalo Sabres’ first-rounder Tage Thompson and New Jersey Devils’ prospect Tyce Thompson.

PHANTASTIC!
– Cal O’Reilly has 533 career assists in the AHL which is tied for 8th all-time with former Philadelphia Phantoms great Peter White who is the all-time leading scorer in franchise history. White had 472 of his points and 319 assists as a member of the Phantoms.
The Phantoms are on a six-game home-ice winning streak since March 11.
– The Phantoms are 16-1-1 when scoring four or more goals. The Phantoms are 16-2-3 when leading at the second intermission.
– Three Phantoms players were recalled to play for the Flyers on Wednesday night: Felix Sandstrom, Tanner Laczynski and Egor Zamula. It was the first NHL game of the season for Laczynski and the second of the year for both Sandstrom and Zamula.
– Five Phantoms players have made their NHL debuts this season: Max Willman, Felix Sandstrom, Linus Sandin, Isaac Ratcliffe, Hayden Hodgson
– Adam Clendening is 4th among AHL defensemen in assists with 32. He is tenth in total points (37) for blueliners.
– The Phantoms have played 68 games and have 8 remaining in the 2021-22 regular season.