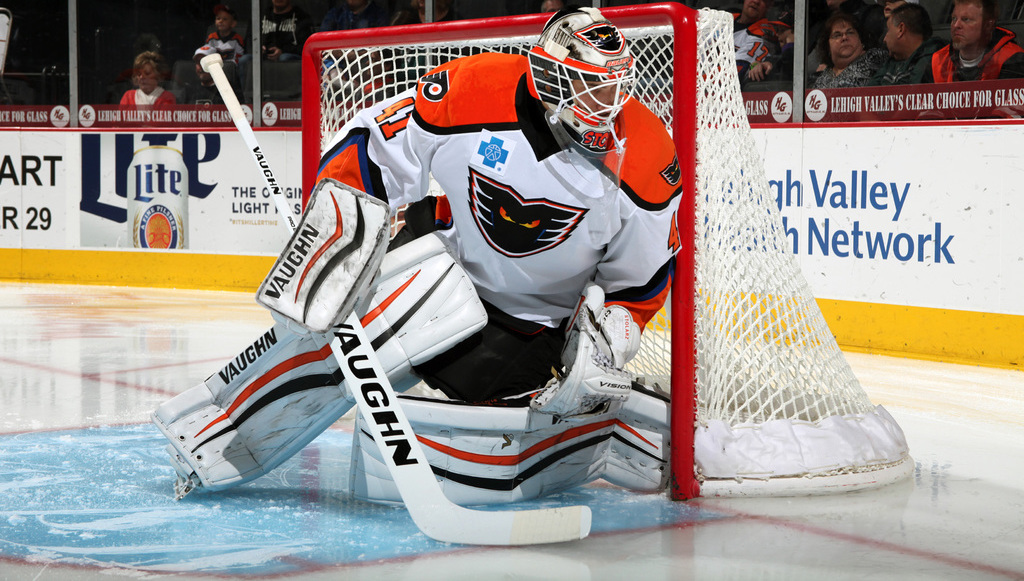 Providence, RI – The Lehigh Valley Phantoms concluded another one of their grueling three-in-three weekends on a positive note grinding out a 5-2 Sunday evening victory at the Providence Bruins. The Phantoms won two out of three games in under 48 hours during their New England road weekend with both of their triumphs coming at the Dunkin’ Donuts Center. After having a four-game point streak snapped the previous night, the Sunday victory in Providence gives the Phantoms points in five of their last six games (4-1-1) while inching their overall record closer to the .500 mark at 8-9-1.

The contest was a much tighter and closely contested battle than indicated by the final margin of victory. Providence pushed forth with continual pressure and out shot the Phantoms 35-21 including 15-4 in the first period. But Anthony Stolarz responded with 33 saves in his most spectacular effort of the weekend. After perhaps expending somewhat less energy the previous night at Hartford, “Stolie the Goalie” was starting his third game in under 48 hours and was leaned on heavily.

“Pretty tired, I’m not going to lie,” Stolarz admitted. “It’s (playing three games in a weekend) is a lot to ask for. I haven’t done that since juniors. I just tried to battle through it and stop as many pucks as I can.”

Samuel Morin’s first career professional goal began yet another balanced attack from the Phantoms which also included tallies from Danick Martel (7th), Kevin Goumas (3rd), Time Brent (5th) and an empty-netter by Petr Straka (12th). The hopping puck from the red line that found the back of the net for Straka with 21 seconds remaining extended the young Czech winger’s goal streak to a Lehigh Valley record six consecutive games and moved him into sole possession of the league lead with 12 total goals on the season.

Straka is now one away from an all-time Phantoms franchise record of scoring a goal in seven consecutive games. The two former Philadelphia Phantoms greats who hold that impressive mark are Shawn McCosh (1996-97 season from November 24 through December 11) and Mike Maneluk (1999-2000 season from February 21 through March 4). Straka will have an opportunity to join that group in the Phantoms next game on Wednesday night at the Utica Comets.

Kevin Goumas had the key goal for Lehigh Valley early in the third period coming shortly after the Bruins had evened the score at 2-2. Veteran defenseman Matt Irwin had just tied things up at 2:39 into the third but just barely over one minute later some hard work along the boards by Tyrell Goulbourne and Aaron Palushaj would set up the eventual game-winner for the second-year center out of the University of New Hampshire.

“It was a great all-around play,” Goumas said. “It was a face-off in their zone. Tyrell and ‘Paloosh’ (Palushaj) are battling on the wall. Tyrell made a nice backhand pass to Paloosh. Their defense went to play Paloosh and I kind of slid into the front and he made a nice saucer pass to me.”

Lehigh Valley had three consecutive power plays later in the third period with an opportunity to extend their lead but were unable to take advantage. But on the other side of that they found themselves down a man and it was Providence’s turn to have a chance with an extra man. Veteran center Tim Brent took care of that dangerous situation with his face-off win right at the beginning of the penalty-kill immediately leading to a shorthanded breakaway. His unassisted strike with 5:49 remaining provided the Phantoms the valuable breathing room they had been seeking in the form of a 4-2 lead.

Resiliency was the key for the Lehigh Valley skaters in their bend-but-don’t-break mindset while hanging in there against a seemingly relentless Providence attack.

“It shows a lot of character that the team has,” Goumas said. “With different injuries and guys stepping up and filling some roles. It’s been tough for us this year but we’ve been able to battle. Slowly we’re coming back and guys are getting healthy.”

Nick Cousins recorded an assist on the game’s first goal nicely firing a cross-ice feed from the right ring over to Samuel Morin at the top of the left circle who powered his big slap shot through Providence rookie goalie Zane McIntyre.

Morin’s first pro goal came after several other close calls in the two previous games of the weekend and provided the Phantoms with a 1-0 advantage at the time. The hulking 6’7″ blueliner from St. Henri, Quebec was the #11 overall selection in the 2013 NHL Entry Draft.

Cousins leads the Phantoms with 18 points and is now rated fourth in the league in that department despite having played fewer games than the other players in the Top 10 due to a late October injury that had sidelined him for nearly two weeks.

Defenseman Mark Alt finished with a +1 rating for the game to improve his season plus/minus statistic to an impressive +13 which now places him all alone at the top of the American Hockey League. Alt is ahead of two players who currently stand at +12 (Justin Holl of Toronto and Esa Lindell of Texas).

The Phantoms wrapped up their third such three-in-three weekend of the season but their road swing isn’t completed yet. Lehigh Valley is back on the road for a Wednesday night contest at the Utica Comets as they continue in the early portions of a tricky and trying stretch playing seven out of nine away from PPL Center.