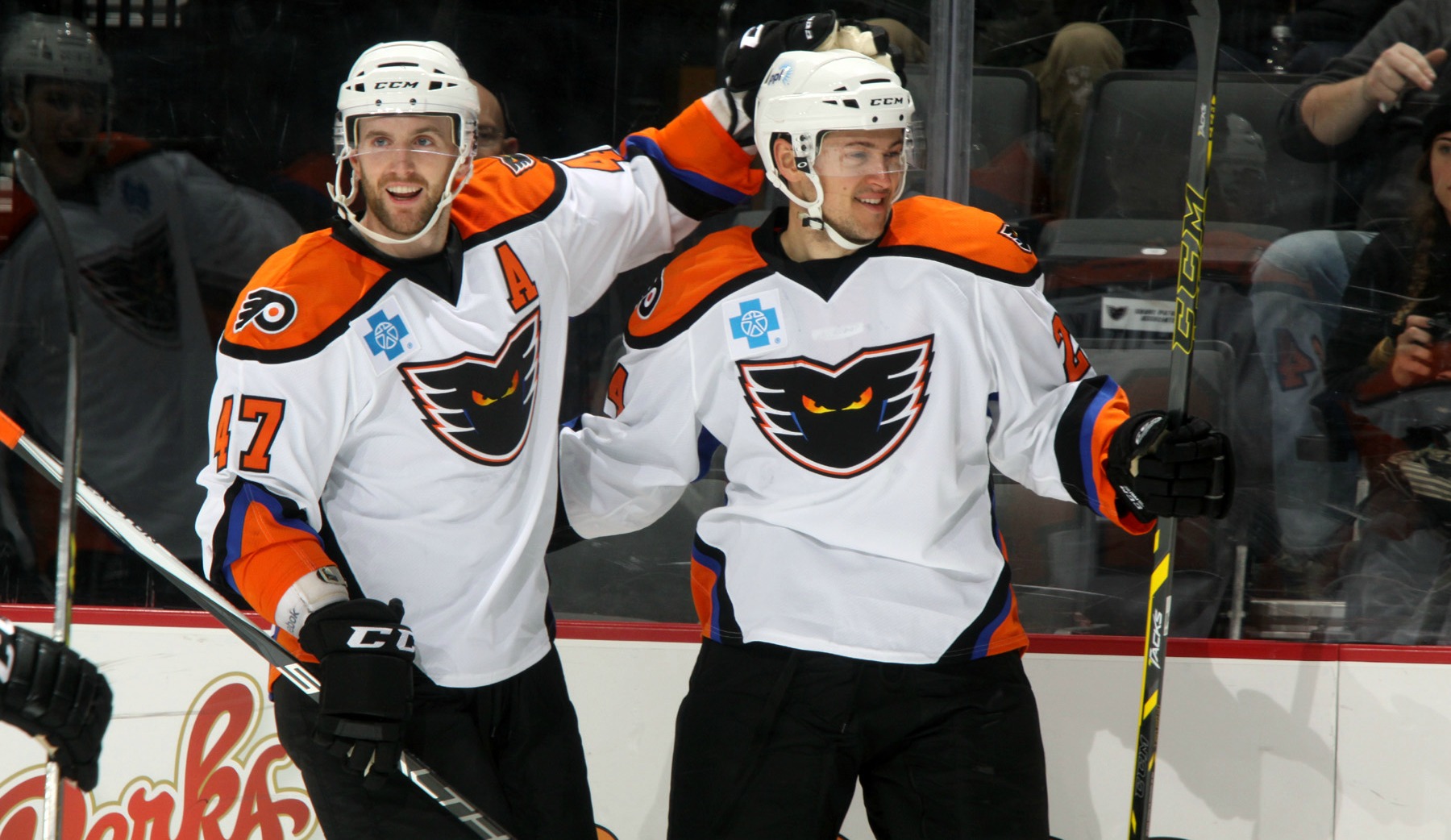 Hartford, CT – Petr Straka continues to score goals left and right, even when he’s not attempting to do so. But his tally wasn’t enough to push the Phantoms over the hump on Saturday night in Hartford, Connecticut. The host Wolf Pack eventually prevailed 3-1 after a late power-play goal essentially clinched their victory in the first of six meetings on the season between the two Atlantic Division foes.

With the result, the Phantoms’ four-game point streak (3-0-1) came to a close as Lehigh Valley just missed out on their opportunity to even their record at .500. There is very little time to stew over the setback as the Phantoms wrap up their busy three-in-three road weekend on Sunday afternoon with a 3:05 start against the Providence Bruins.

Straka’s second-period effort to connect on a centering pass for Mark Alt in the slot instead went off the leg of a back-checking Hartford defender and into the Wolf Pack net. Straka’s goal was assisted by Nick Cousins and Mark Alt and cut in half a 2-0 deficit facing the Phantoms at that time. Cousins leads the Phantoms with 17 points and also moved into a tie for sixth in the league.

The league-leading 11th goal of the season for Straka also extended his goal-scoring streak to five in a row which is the longest such stretch in the American Hockey League in the 2015-16 campaign. Devin Shore of the Texas Stars also had a goal in Satruday night action around the league to keep pace with Straka for most lamplighters.

While the power-play goal helped Hartford breathe a little easier late, it was actually the opening minutes of the game that proved to be the deciding factor. Hartford raced out to a 2-0 advantage in the opening 3:30 of the contest on goals by Brady Skjei just 29 seconds in followed by a Luke Adam tip of a Tommy Hughes slap shot at the 3:21 mark.

Albeit belatedly finding their stride, the Phantoms would charge back with multiple opportunities at second-year goalie MacKenzie Skapski. Nick Cousins misfired on a breakaway and barked at the referee his contention that he was hooked on the play to no avail.

In the second period, speedy center Brian Gibbons worked his way free for a Hartford breakaway and while his chance was repelled by Anthony Stolarz he was also hooked from behind by Mark Alt leading to the first penalty shot against the Phantoms this season. But “Stolie the Goalie” made the save on that chance as well.

Colin McDonald laid out some heavy and hard hits early in the third period drawing the attention of fellow veteran Nick Tarnasky of Hartford. McDonald refused to drop the gloves with Tarnasky and eventually ended up on the receiving end of a Tarnasky’s charging infraction leading to a power-play opportunity for the Phantoms but they were unable to take advantage of their late attempts to tie the score.

Eventually Tanner Glass would score on a power play in the closing minutes on a rush into the zone with Brian Gibbons to conclude the scoring.

The penalty-shot denial by Stolarz was the second ever against the Lehigh Valley Phantoms and the first in the pro career of Stolarz. Last season on January 17th it was Martin Ouellette making a save on Binghamton’s Alex Guptill on the only other penalty shot offering against Lehigh Valley. The last successfully converted penalty shot against the Phantoms franchise came three seasons ago on March 29, 2013 when Alex Guptill of Binghamton converted against Cal Heeter of the Adirondack Phantoms. Since that time, the opposition has gone 0 for their last 5 on penalty shot chances against the Phantoms in the last three seasons.

Hartford out shot the Phantoms 26-24. The Pack were 1-for-4 on the power play while Lehigh Valley finished at 0-2. Anthony Stolarz turned aside 23 of the 26 Hartford shots he faced as his microscopic goals-against average was budged to 1.92 which now rates fourth-best in the AHL. Stolarz has started the last five games in a row including all four games of the point-streak which came to an end tonight.

The Phantoms conclude their three-in-three weekend stretch with a rematch at the Providence Bruins on Sunday at 3:05. The Phantoms had just won a Friday night tangle in Rhode Island by a 4-1 margin. Broadcast coverage for the Sunday game begins at 2:20 on 1470-AM and FOX1470.com and the iHeartRadio app with the Voice of the Phantoms, Bob Rotruck. Lehigh Valley wraps up the four-game road-swing with a Wednesday night duel at the Utica Comets on Thanksgiving Eve.