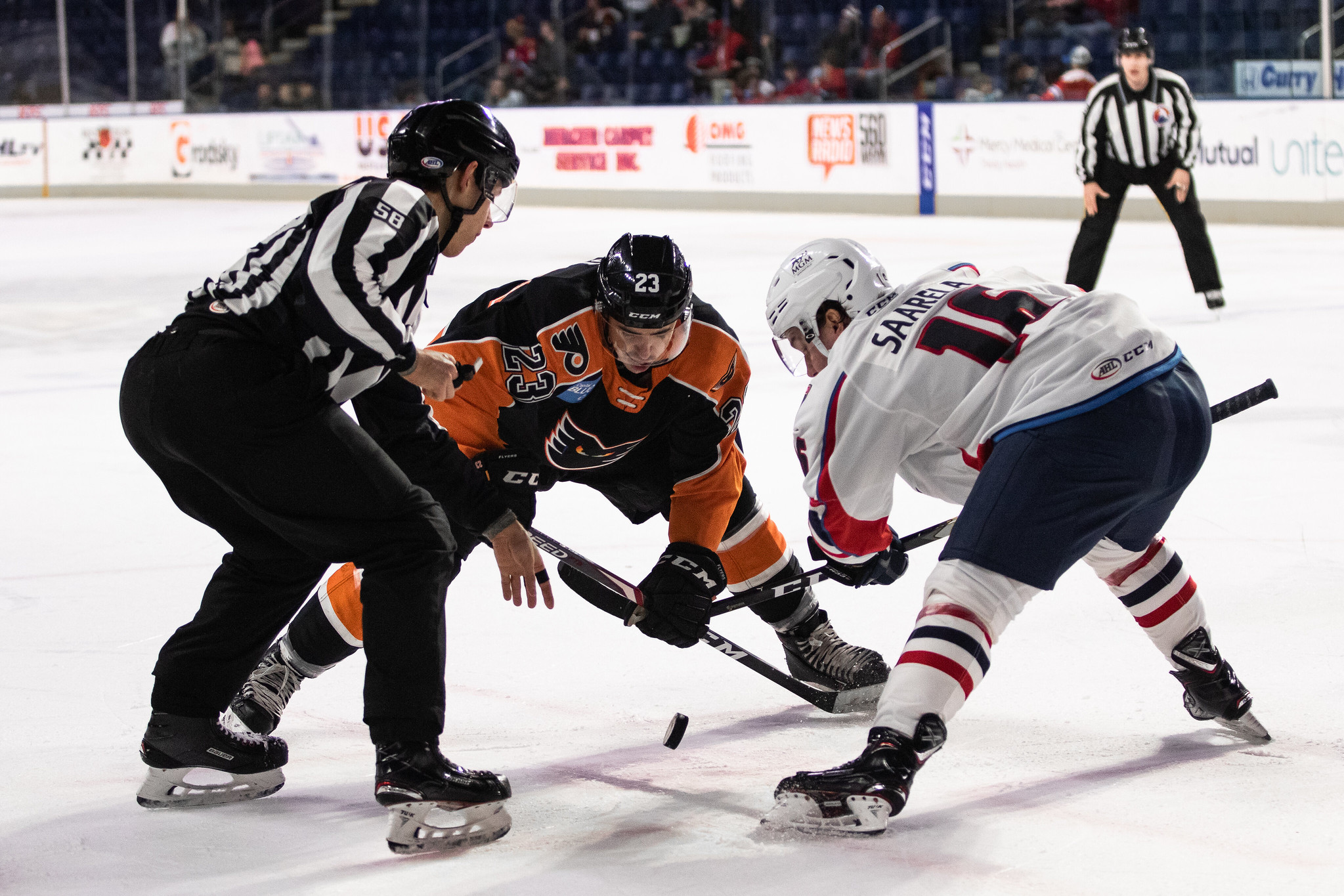 Only the Third Regulation Loss for Phantoms in 2-1 Final

Springfield, Mass. – The Lehigh Valley attack kept coming at the Springfield Thunderbirds in wave after wave. But goalie Chris Dreidger hung on via a spectacular 41-save performance while the Phantoms fell maybe an inch shy of tying the contest in the game’s closing minutes. 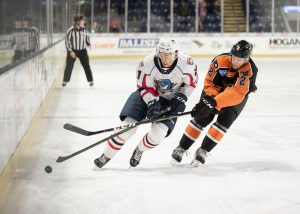 The Phantoms briefly thought they had tied the game with 3:20 remaining when Kyle Criscuolo’s shot deflected off Dreidger and bounced along the goal line. The referee signaled that the puck had crossed the plane of the line in mid-air for a goal that would have evene the score at 2-2. But the decision was reversed upon video-review allowing the Thunderbirds to maintain the lead and hold on from there.

The 10:35 a.m. start was played in front of thousands of enthusiastic (and screaming) kids during the Springfield Thunderbirds’ annual School Day special.

The regulation loss was just the third of the season for the Phantoms and only the team’s second defeat in the last 13 games.

Greg Carey (5th) rifled home his fifth of the season early in the second period with assists to Cal O’Reilly and Andy Welinski. But that would officially be the only puck to get past Dreidger despite the Phantoms equaling their season-high with 42 shots. 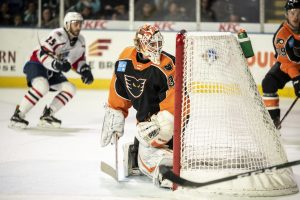 Alex Lyon was also splendid in net with a 33-save performance on 35 shots. Owen Tippett’s centering pass from the right wing while on the rush hit off the stick of a Phantoms defenseman and found the back of the on an unfortunate play of bad luck. And defenseman Tommy Cross stepped around a defender in the right circle to score the tie-breaking goal with 3.4 seconds left that held up as the game-winner despite the Phantoms strong efforts for an equalizer.

Lehigh Valley (6-3-5) was flying to open the second period. A determined effort to produce more pucks at Dreidger resulted in Carey’s goal on a fourth quick-fire shot of the frame. The Phantoms kept it up and threatened to take the lead on several occasions with a 13-0 shot advantage to open the second period but Dreidger stayed strong and made a number of fine saves.

Springfield (10-6-0) responded with a surge of its own producing 14 consecutive shots in the latter half of the period but Alex Lyon was up to the ask as was the Phantoms penalty kill that successfully staved off consecutive T-Birds advantages. But the Tommy Cross dangle in the right circle to set up his top-shelf tally in the period’s final seconds proved to be the difference.

Nicolas Aube-Kubel and Maksim Sushko had the puck on the doorstep in the first period. And Gerry Fitzgerald had a quick breakaway in the third period. And in-between the Phantoms generated chance after chance. But Driedger displayed his talents in maintaining his status as one of the top goalies in the American Hockey League this season. 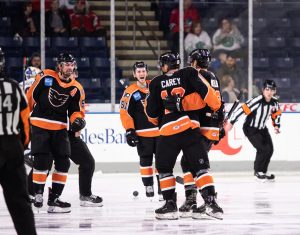 Criscuolo’s shot with 3:20 left went off of Driedger who was pulled out to his left. Bouncing behind the goalie and into the crease, the puck appeared destined to find the cage. But defenseman Thomas Schemitsch somehow swatted it out in mid-air with his right hand. Greg Carey had retrieved the puck to the side of the net and was ready to set up another scoring try when the referee blew play down and signaled that the shot was a goal. The video-review ultimately went against the Phantoms thus confirming the puck had not actually gone in.

Springfield was 0-for-2 on the power play while the Phantoms finished at 0-for-1. Lehigh Valley out shot the Thunderbirds 42-35.

Next Time Out: The Phantoms four-game road-trip continues with Friday and Saturday night engagements at the Binghamton Devils and Wilkes-Barre/Scranton Penguins. The Phantoms return home on November 20th for a matchup against the Charlotte Checkers to begin a three-game homestand. Fans can still buy tickets for that game and all three games as part of Retro week on November 20, 22, and 23, HERE .