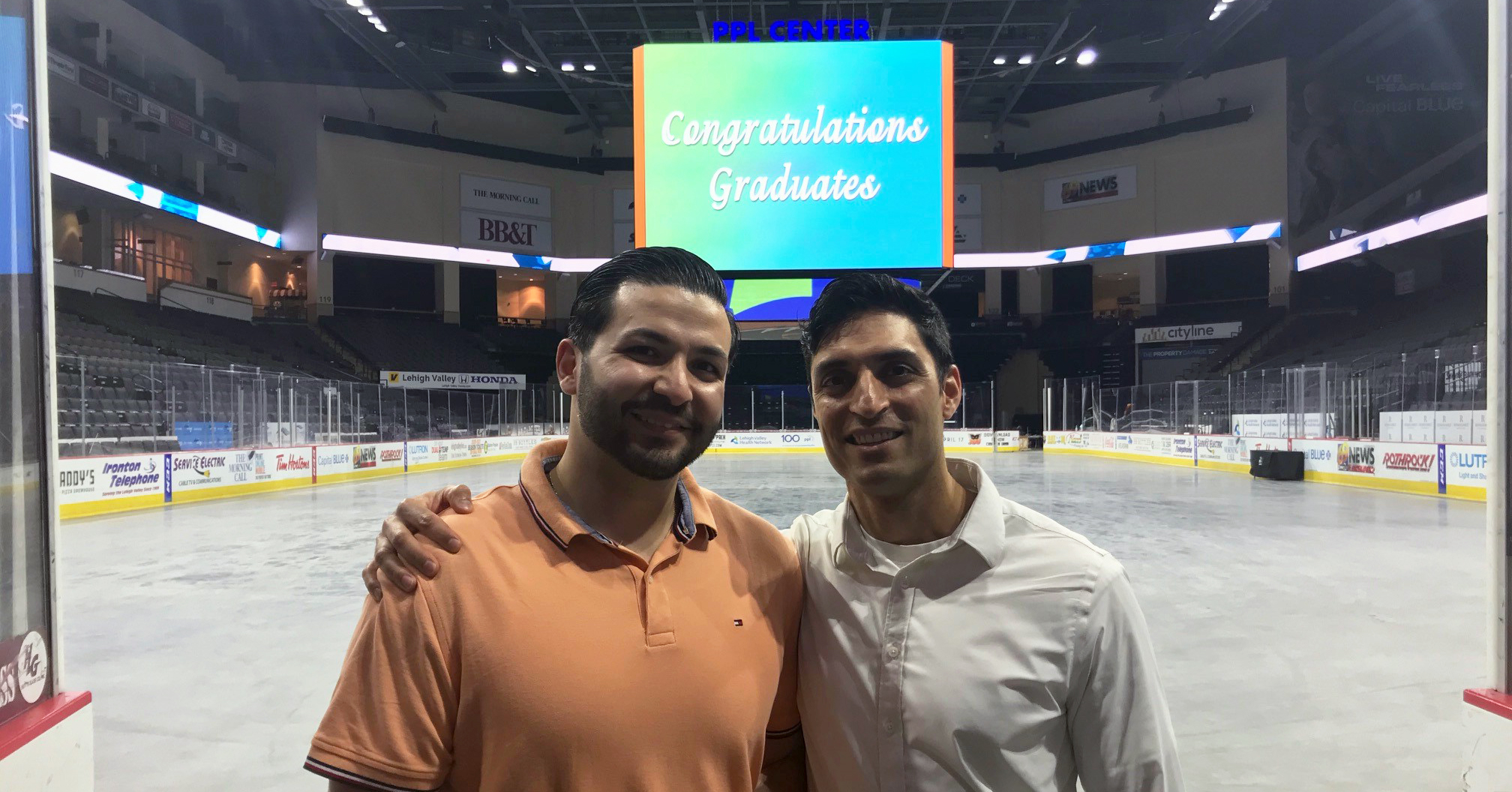 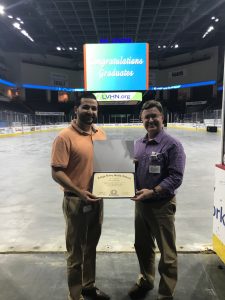 Dr. Neil Matthews is the Department Chief of Family Medicine at LVHN. He is also the Lead Team Physician for the Lehigh Valley Phantoms and the Program Director for the LVHN Sports Medicine Fellowship. Dr. Matthews has been the Phantoms team physician since the inaugural 2014-15 season, which was also the year they launched the Sports Medicine Fellowship program. Last weekend, Dr. Matthews brought his two fellows from the 2019-20 season to PPL Center to award them their degrees, despite them not being able to have a proper graduation ceremony.

Xander Arwand, DO and Paul Fernandes, DO were the 2019-20 sports medicine fellows who spent the past season with the Phantoms. They each attended at least 10 Phantoms home games this past season and even traveled with the team to some away games in Hershey and Wilkes-Barre. As part of the fellowship program, they observe all of the talented doctors who work with the Phantoms, as well as help with preseason physicals, administer concussion tests, and get to utilize the PPL Center for on-ice training throughout the season.

Dr. Arwand will be staying at Lehigh Valley Physician Group Orthopedics as a non-operative sports medicine specialist. He will be able to cover for Dr. Matthews at any Phantoms games he is unable to attend. Dr. Fernandes, is a Major in the United States Air Force and will be leaving for the Air Force Academy in Colorado Springs, CO to care for the cadets in their sports clinic. They will join an impressive list of former fellows who worked with the Phantoms to go onto to promising careers, which include the NBA and the U.S. Women’s Olympic Ski team. 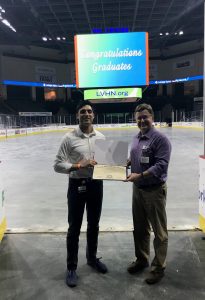 Working with the Lehigh Valley Phantoms gives them an opportunity to learn from and assist a variety of experts they might not have the opportunity to with other teams. “Most AHL teams have one or two doctors at the game,” Dr. Matthews said. “The Phantoms and Flyers wanted us in Lehigh Valley to be like the NHL so we have four providers at every game and I think we are one of only three teams in the entire AHL that have that kind of coverage.”

Now going into his seventh season as team physician, Dr. Matthews is a staple around the PPL Center and has worked with every current and former Phantoms player. He truly loves the experience has gets working with the team. “I get nothing out of this except I just love the job,” Dr. Matthews said. “It’s nice now because it’s been six years. Now that I know the Brooks brothers, I mean you can’t ask for two nicer guys to deal with. The coach has been here, and Brian is such a great trainer, and the players who have been here all respect me, and it’s just a really fun job.”

Dr. Matthews is also looking forward to bringing in a new pair of fellows for the upcoming season as Jennifer Aronchick, MD and Joe O’Brien, DO officially started their fellowship on July 1 and will be at Phantoms games this upcoming season. Both just completed their Family Medicine residencies; Dr. Aronchick at LVHN, and Dr. O’Brien at Bryn Mawr Hospital.

The close partnership the Lehigh Valley Phantoms have always had with Lehigh Valley Health Network, one of the teams’ founding partners, is a relationship that has mutually benefited everybody involved, from the GOALS4LV Challenge to the Sports Medicine Fellowship.

“It’s a win-win-win for everybody,” Dr. Matthews said. “The team gets really good medical coverage, our hospital is really well known, very highly related nationally. We are one of the top 50 orthopedic departments in the entire nation. I think the team gets incredibly good care so the team benefits from that. The hospital benefits from the high profile of being partnered with a professional sports team. And with my program, the fellows get this wonderful experience of getting a glimpse into professional sports and covering something that’s a lot of fun.”