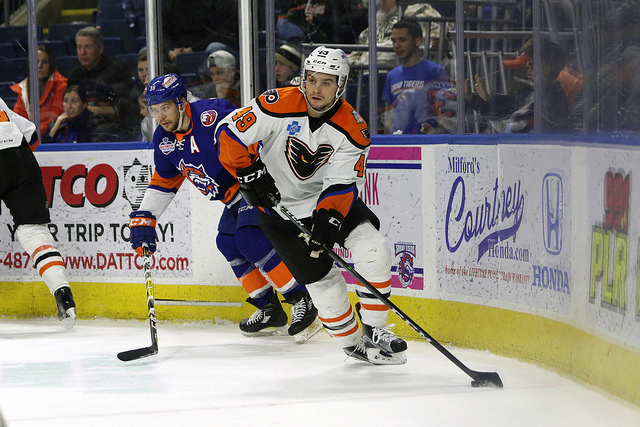 Bridgeport, CT – Lehigh Valley couldn’t muster up their third-period comeback magic in this one. Jaroslav Halak and the Bridgeport Sound Tigers staved off the Phantoms late surge and held on for a 3-2 decision on Saturday night at Webster Bank Arena.

The result ends the Phantoms three-game winning streak and is just the team’s second loss in the last seven games. Surging Bridgeport won their seventh consecutive contest in a hard-fought and well-played battle.

Scott Laughton (9th) and Will O’Neill (3rd) struck for the Phantoms conversion while Anthony Stolarz made 18 saves in the crease. Travis Sanheim registered a pair of assists while Jordan Weal’s assist extended his point streak to eight games through which he’s accumulated 11 points (4+7).

Josh Winquist (8th), Steve Bernier (6th) and TRavis St. Denis (8th) all found the back of the net for Bridgeport in the see-saw contest while the 31-year-old Halak turned aside 29 Phantoms shots. the Sound Tigers used a pair of power-play goals to ultimately push through for the victory.

Scott Laughton opened the scoring almost nine minutes in the game after Travis Sanheim neatly anticipated a pass on the blue-line during Bridgeport’s power play. Laughton rushed up the left-wing along with Sanheim on a 2-on-1 but Laughton opted to take the shot himself from the left circle and perfectly picked the upper, far corner on Halak’s glove-hand going bar-down for his second shorhanded marker of the season. 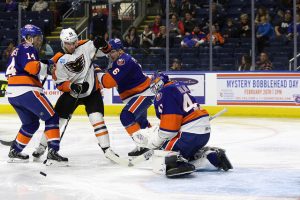 Bridgeport equalized about 10 minutes later on another power play with Josh Ho-Sang securing a puck behind the Phantoms goal and finding Michael Dal Colle in the left circle who quickly connected across to an awaiting Josh Winquist on the backdoor to rifle home his eighth of the year and third of the weekend.

The Phantoms had a golden chance to break the 1-1 deadlock in the second period with 1:34 of 5-n-3 but the lethal power-play attack of Lehigh Valley was held in check by the hard-working penalty kill of the Sound Tigers who received a momentum boost into the locker room at the second break with the key kill as well as a carry-over power play.

Bridgeport took the lead in the closing seconds of their carry-over man advantage to begin the third period with a quick moving rush in the Phantoms zone. Former Adirondack Phantom Andrew Rowe would find NHL veteran Steve Bernier for the back-door chip over the extended left pad of Stolarz. Bernier’s 16th of the year put the Sound Tigers back in front 2-1.

The Phantoms scored their first power play goal of the weekend at 5:41 into the third period when Jordan Weal’s nifty forehand to backhand move resulted in a flip over the stick of a Bridgeport penalty kill to perfectly set up Will O’Neill for a big slap shot from center-point. Lehigh Valley had roared back to even the score at 2-2 but it wouldn’t last for long. 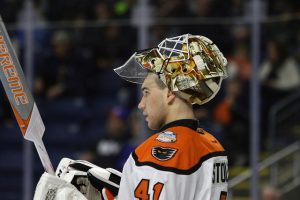 Bridgeport improved to 4-2-0 against the Phantoms. 33% of Lehigh Valley’s 12 regulation losses have come to the hands of the New York Islanders’ affiliates. The game marked the last regular-season visit to southern Connecticut for the Phantoms. The remaining two meetings between the Phantoms and Sound Tigers will come at PPL Center on March 26 and March 31.

Lehigh Valley out shot the Sound Tigers 31-21. Bridgeport finished 2-for-4 on the power play while the Phantoms were 1-for-5.

Most of the Phantoms and the rest of the AHL are now on the AHL All-star Break with no practices or games for the next few days. The Lehigh Valley Phantoms will return for a practice Thursday morning in preparation for their next games on Friday night at the Albany Devils and Saturday night at the first-place Wilkes-Barre/Scranton Penguins.

The Phantoms next home game is Wednesday, February 8 against the Binghamton Senators. Lehigh Valley remains at PPL Center for contests against the St. John’s IceCaps on February 10 and 11. 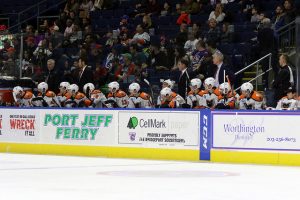 Of course, there is no shortage of hockey at PPL Center while the Phantoms are gone. The AHL All-Star Classic presented by Capital Blue Cross is on the way. The Skills Competition presented by Velaspan and Giant Food Stores is Sunday night and the All-Star Classic featuring a round-robin 3-on-3 tournament of the best players from all four divisions will take place on Monday. Select seats remain available at PPLCenter.com