Lehigh Valley, Pa. – The Lehigh Valley Phantoms, in conjunction with the American Hockey League, are pleased to announce that forward Jordan Weal has been named CCM/AHL Player of the Month for January. One of Lehigh Valley’s three representatives at the 2017 AHL All-Star Classic presented by Capital BlueCross, he compiled an impressive 14 points (5 goals, 9 assists) and a plus-7 rating across 11 January outings. 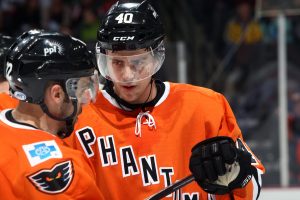 Weal managed at least one point in 10 of 11 January contests and closed the month on a season-high eight-game point streak during which he’s produced 12 points (4 goals, 8 assists). He matched a team season-high with four points (goal, 3 assists) in Lehigh Valley’s 7-2 victory over the Binghamton Senators at PPL Center on January 25 and helped guide the Phantoms to an 8-4 overall mark during the month.

Weal currently leads all Lehigh Valley skaters and is second among all AHLers in total scoring with 45 points (15 goals, 30 assists).

He will be presented with an etched crystal award prior to an upcoming home game in recognition of his achievement.

The Phantoms return to action with a pair of road games this weekend. First, Lehigh Valley travels to Albany this Friday, February 3 for a showdown with the Devils. Then, on Saturday, February 4, the Phantoms renew their in-state rivalry with the Wilkes-Barre/Scranton Penguins in a 7:05 p.m. tilt at Mohegan Sun Arena.