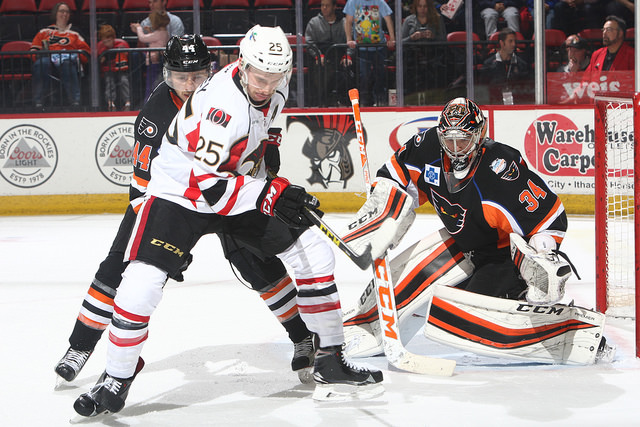 Binghamton, NY – When the league’s top offense had a tougher than usual time breaking through one can be thankful for solid goaltending. Rookie goalie Alex Lyon was magnificent in a 28-save gem lifting the visiting Phantoms to a 1-0 victory at the Binghamton Senators on Thanksgiving Eve. It was the first professional shutout for Lyon and the first-ever 1-0 decision in Lehigh Valley history. 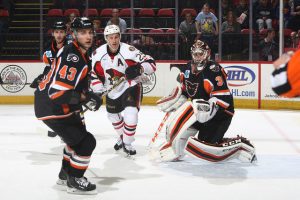 Colin McDonald (8th) scored against Binghamton’s Andrew Hammond midway through the third for the lone goal either side would notch.

Some shutouts are a bit easier than others. This one was not of the simple variety for Lyon. The 23-year-old from Yale University made a number of magnificent stops including a handful from close range or point-blank. Nick Paul was robbed with seven minutes to go in the first on a diving glove stop by Lyon lunging to his left after a Buddy Robinson wrap-around appeared to set up the Senators for an early strike. That may have been Lyon’s best of the night but there were certainly other candidates worthy of consideration as well. Guillaume Lepine and Francis Perron both were denied on quality opportunities. And with about about six minutes to go in the game, Lyon flashed the right pad to repel Phil Varone on a low-slot chip in transition on a perfect give from Penn State product Casey Bailey in the corner. 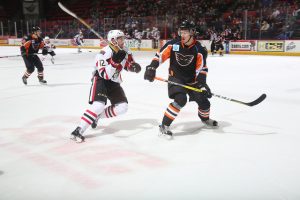 The Phantoms were not without their quality opportunities as well but were repeatedly robbed by The Hamburglar, Andrew Hammond, as the nail-biting goaltenders’ duel ticked on and on with neither side breaking through.

Finally, Taylor Leier connected with Colin McDonald on a little give-and-go. Leier declined his opportunity to shoot and thought he could set up McDonald nicely. Hammond appeared to make the initial stop off the left leg but the Phantoms captain stayed with it to secure the lone lamplighter of the evening. Corban Knight received an assist on the critical strike as well.

Hammond likely deserved a better result for his spectacular performance. The send-down from the Ottawa Senators was appearing for Binghamton for the first time this season. The former 2014-15 sensation in the NHL who exploded on the scene for a 20-1-2 record had been sidelined with an injury this year. 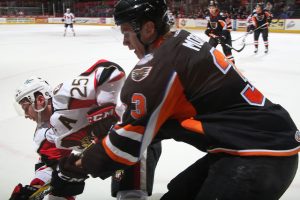 Lyon secured the Phantoms first 1-0 victory since January 3, 2014 when Cal Heeter accomplished the feat for the Adirondack Phantoms against the Hershey Bears. It is the 16th time in franchise history for a 1-0 shutout win or a 0-0 tie.

Alex Lyon becomes the fourth Lehigh Valley backstop to post a shutout joining Anthony Stolarz (3), Martin Ouellette (2) and Jason LaBarbera (1). It is the seventh shutout all-time for Lehigh Valley and the 90th shutout ever in the 21 seasons of the Phantoms franchise. 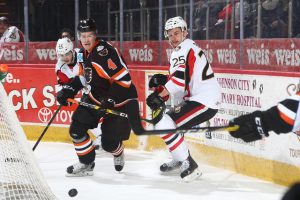 Lehigh Valley and Binghamton return to action for a Black Friday rematch at PPL Center at 7:05. The team’s Go Birds Tailgate will feature Ron Jaworski and the Eagles Cheerleaders at PPL Center with “Jaws” signing autographs in the concourse from 6:00-6:45. The Phantoms conclude their Thanksgiving Holiday Weekend Feast of Hockey with a Saturday night clash against the Hartford Wolf Pack at 7:05. Tickets are available at PPLCenter.com or by calling (610) 347-TIXX.