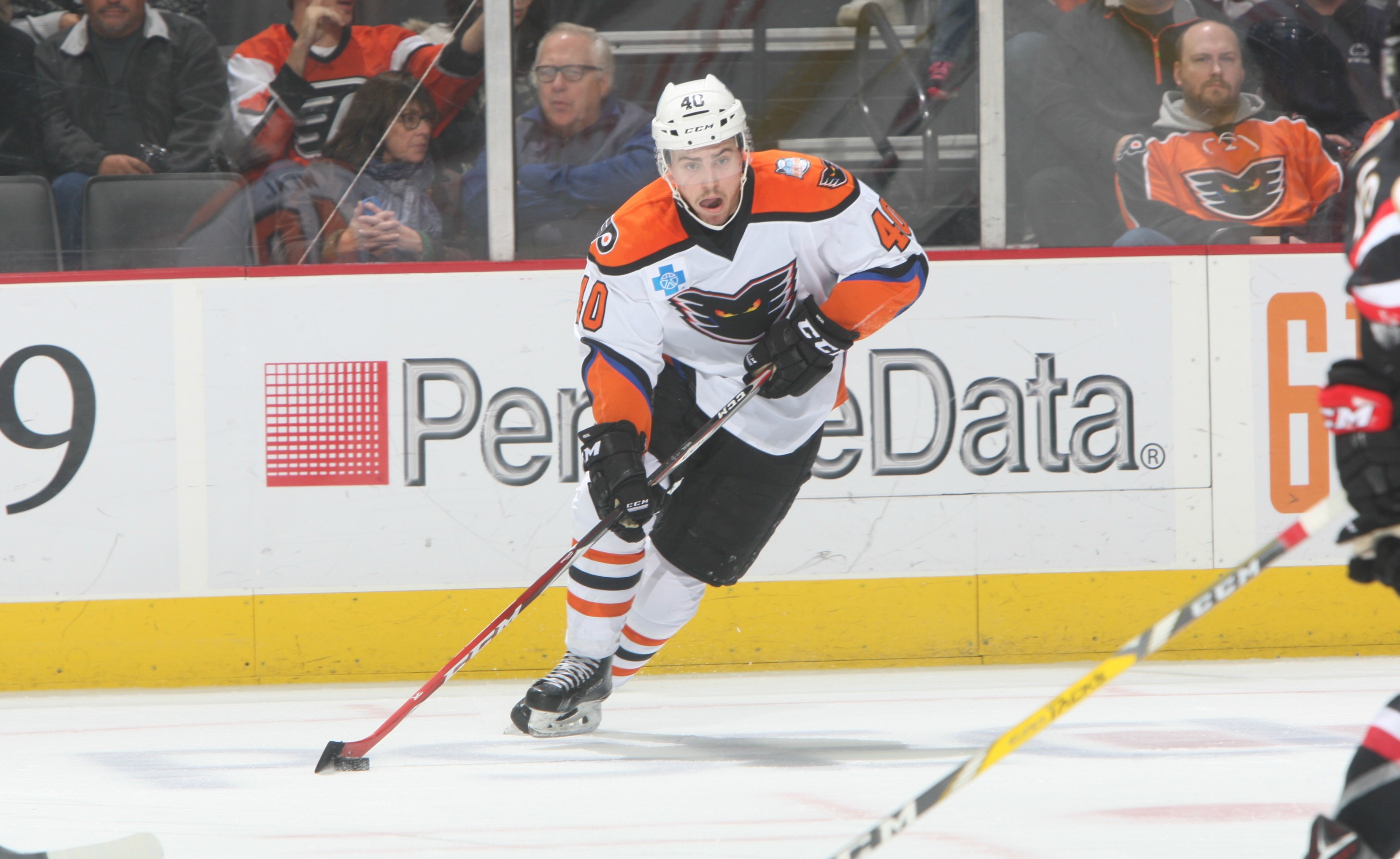 Lehigh Valley, PA – Jordan Weal (5th, 6th) scored twice and Chris Conner and T.J. Brennan added a pair of assists as the Lehigh Valley Phantoms answered each and every Binghamton Senators surge Friday evening in earning a resilient 4-3 win in front of 7,859 fans at PPL Center. Mark Zengerle (5th) and Taylor Leier (5th) also scored for the Phantoms in a game that featured four separate ties. 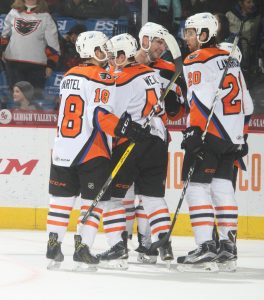 With the win, Lehigh Valley improved to 12-4-1 (0.735) overall this season and moved into sole possession of first place in the Atlantic Division following the Wilkes-Barre/Scranton Penguins’ 3-2 overtime setback at the Bridgeport Sound Tigers. Friday’s victory was the 10th over the last 11 games for the Phantoms who have outscored their opposition 43-25 during that span.

The victory also capped a sweep in the home-and-home series between the Phantoms and Senators following Lehigh Valley’s 1-0 win in Binghamton on Wednesday.

Weal’s two goals increased his team-leading point total to 17 total points (6 goals, 11 assists) while Brennan’s two helpers moved him into a tie with Leier for second among all Lehigh Valley skaters in scoring (16 points). Meanwhile, Leier’s conversion increased his current scoring streak to a season-high five games as the third-year winger has tallied two goals and six points across his last handful of games. 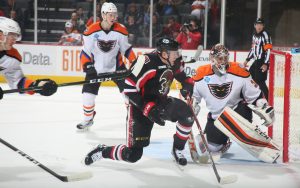 Making his sixth consecutive start in goal, Alex Lyon earned the victory with a 32-save performance, which included a jaw-dropping full extension right skate save in the second period. With the win, Lyon improved to 6-2-1 overall this season and has compiled an impressive 1.99 goals-against average coupled with a 0.937 save percentage during his six-game stretch.

Lehigh Valley’s penalty was also a perfect 3-for-3 in the victory and has now allowed just four power play goals over the team’s last 11 games (33-for-37).

The Phantoms opened the scoring with just over a minute remaining in the first period when a beautiful pass by Conner found Weal in the slot who made no mistake in quickly snapping home his sixth goal of the season. Brennan collected the secondary assist with a tremendous individual effort to keep the puck in the attacking zone. The five-on-five marker came 18:59 into the opening frame and marked the 11th time in 17 games this year that Lehigh Valley has landed the game’s first conversion. The Phantoms are now 9-2 when scoring first this season.

Binghamton leveled the contest just prior to the midpoint of the second stanza when a wrist shot from the high slot by Andreas Englund was directed en route by Ryan Rupert into the back of the Phantoms’ cage for Rupert’s third goal of the season. Nick Paul garnered the second assist on the even-strength strike netted 9:13 into the middle period.

The Phantoms bounced right back though and re-established their advantage just over two minutes later when, from below the goal line, Greg Carey found Zengerle at the side of the Senators net who was able to send home his fifth goal of the year. Carey and Cole Bardreau assisted on the five-on-five conversion scored 11:47 into the second frame.

Binghamton tied the contest at two apiece less than five minutes into the third period when Jack Rodewald chipped in his third goal of the year but the Phantoms were quick to respond and recaptured the lead just over two minutes later when a point shot by Brennan produced a rebound atop the Senators goal crease that was promptly swatted home by Leier. Radel Fazleev garnered the second assist on Leier’s fifth tally of the season, which came 6:39 into the final frame of regulation.

True road warriors, the Senators didn’t quit and tied the game yet again at 8:13 of the third period when Phil Varone slammed in his third goal of the year.

But Lehigh Valley just wasn’t going to be denied as the Phantoms claimed the lead once and for all with just over four minutes left in the contest when Conner executed a brilliant pass from behind the Binghamton net to Weal who chipped in his second goal of the game and sixth of the season. Danick Martel claimed the secondary assist on the eventual game-winning goal scored 15:55 into the third period.

The Phantoms are back in action at PPL Center on Saturday when they welcome the rival Hartford Wolf Pack, the AHL affiliate of the New York Rangers, to downtown Allentown. A limited number of tickets remain for Saturday’s highly-anticipated showdown and can be purchased online HERE.