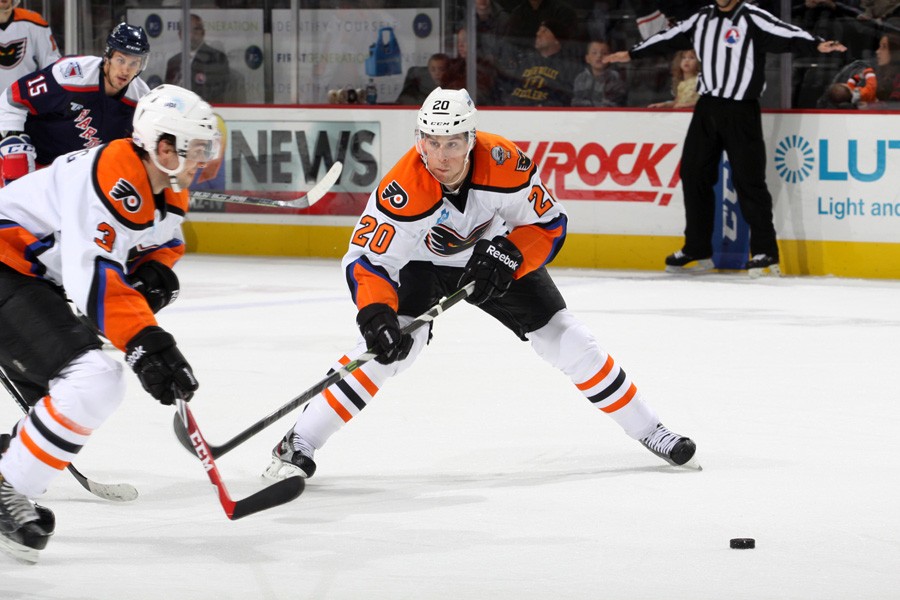 Worcester, Mass. – Shayne Gostisbehere was less than an inch away from making his first career professional goal a dramatic equalizer in the final seconds of Wednesday’s game in Worcester, Mass. But the rookie’s blast with 35 seconds left bounced off the crossbar and back out allowing the host Sharks to hang on for a 4-3 decision in a see-saw affair.

The Lehigh Valley Phantoms and Worcester Sharks traded leads back and forth through the night. Brandon Alderson’s go-ahead goal eight minutes into the third momentarily gave the Phantoms a 3-2 advantage. But the Sharks rallied for back-to-back goals less than a minute later to turn the tables on the Phantoms.

Taylor Leier (2nd), Petr Straka (3rd) and Brandon Alderson (2nd) all scored for the Phantoms who were opening a four-game road-swing that includes three games in New England this week. Anthony Stolarz turned aside 31 Sharks drives in the game and the rookie goaltender remains in search of his first professional win.

Shayne Gostisbehere and Brandon Manning both returned to the lineup for Lehigh Valley following their recent call-ups to the Philadelphia Flyers. For Manning, he made it here from Philadelphia just in time to join the lineup. The Phantoms went from five defensemen in Saturday’s game against Hartford to a full stock of eight total blue-liners available for this one.

Jeremy Langlois led the Sharks with a pair of goals while Ryan Carpenter scored the game-winner on a shorthanded rush. Troy Grosenick had 32 saves for the Worcester win. He was beaten late on a blast by his former teammate at Union College, Shayne Gostisbehere, but the iron behind him proved to be his good friend in helping deny the potential late tying tally.

Taylor Leier opened the scoring in the fifth minute of game action on a nice give-and-go on the power play with Petr Straka. Leier from the left boards gave the puck down low to Straka whose give back to the slot met the rushing Leier perfectly on the tape for the open shot.

The Phantoms had the better of the play for the majority of the first period but the Leier goal was all they had to show for it. Worcester would get their offense kick-started, almost literally, with a lucky-bounce for a goal off the skate of Jeremy Langlois. The pass from Freddie Hamilton bounced off the skate of Langlois and through the legs of Stolarz. The score was ruled to have not been the result of a distinct kicking motion and the game was tied at 1-1 at the first intermission.

Langlois again would strike midway through the second period this time rushing into the slot to poke home a spinning puck that rebounded off a Stolarz stick-save.

Lehigh Valley would come back to tie the score at 2-2 with 1:21 remaining in the second period after some strong, sustained pressure in the Sharks zone. Zack Stortini did a fine job preventing Worcester from clearing and Robert Hagg’s shot from the point was kicked out by Grosenick to Straka in the slot who buried his rebound opportunity.

Early in the third period, Scott Laughton was denied what should have been his sixth goal of the season when his chip up the middle on an Andrew Gordon rush up the boards was somehow gloved by Grosenick for a near-miraculous save.

But later Alderson wouldn’t be denied. Shaking off a defender draped behind him and fighting his way through a delayed penalty call, Alderson was still able to convert top shelf eight minutes into the third to give the Phantoms a 3-2 lead.

The lead would only last for 49 seconds after a costly Phantoms’ let-down. Daniil Tarasov had a third crack at Stolarz after Matt Tennyson had been denied point-blank back-to-back. And 61 seconds after that, with Lehigh Valley on the power play and a chance to re-take the lead, a Rylan Schwartz shorthanded breakaway would lead to a Ryan Carpenter rebound goal with 10:08 left to complete the comeback.

Despite some more chances on Grosenick including the Gostisbehere post-shot, the Sharks would hang on for the 4-3 win.

Shots in the game were even at 35-35. Lehigh Valley was 1-for-4 on the power play while the Sharks were 1-for-5 plus a shorthanded goal.

The Phantoms record now stands at 4-4-1 while the Sharks improved to 6-3-1. The game was the first of four between the Phantoms and the Sharks with the next encounter coming on Friday, November 21 at PPL Center.

Lehigh Valley’s New England sojourn continues Friday and Saturday at the Manchester Monarchs and Portland Pirates. The Phantoms’ next home games are Saturday, November 15 vs. the Toronto Marlies and Wednesday, November 19 against the Hershey Bears. Tickets are on sale at pplcenter.com or by calling 610-347-TIXX (8499).