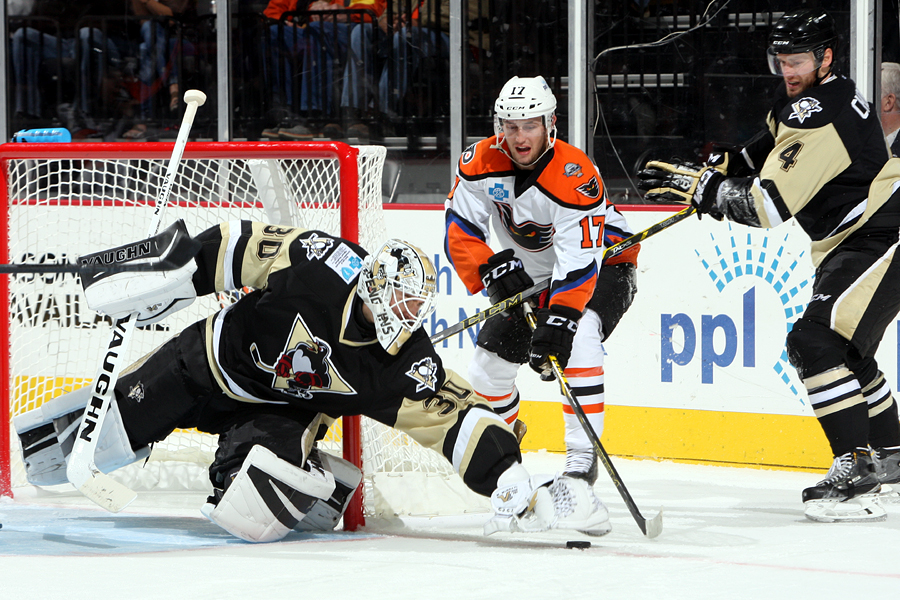 Lehigh Valley, PA – A sixth consecutive sellout welcomed back the Phantoms in the team’s first home game in two weeks but Lehigh Valley was held off the PPL Center scoreboard for the first time ever in a 3-0 loss to the Wilkes-Barre/Scranton Penguins. Rookie goalie sensation Matt Murray turned in a 32-save performance for his league-leading 10th shutout of the season.

Another packed house of 8,763 fans jammed into PPL Center for the first ever Sunday home game which was also the opener of a four-game homestand. The six consecutive sellouts is the longest such stretch of the year for Lehigh Valley and represented the team’s 18th overall sellout of their inaugural season in just 30 home games.

The huge crowd, and the Phantoms, came out ready to rock. With an 8-0 shots advantage in the opening minutes, Lehigh Valley had Matt Murray and the rest of the Penguins on their heels. The Phantoms had some glorious chances in close which included some highway thievery on a Taylor Leier attempt in the early minutes. Lehigh Valley had the early momentum but Murray’s big-time stops combined with a couple other wide drives to keep the Phantoms out of the net which somehow continued for the duration of the day.

The Phantoms had a veritable bevy of quality chances throughout the contest but were simply unable to bury them.

“It’s frustrating but you just keep at it. That’s our attitude,” Brett Hextall said. “Keep grinding away and eventually we’ll get them. You’ll see here one of these games we’ll score six goals. When it rains it pours and the other way around too.”

After all the momentum of the early going, the Penguins would start to turn the tables some and get a couple of surges of their own. Wilkes-Barre/Scranton eventually converted for a pair of goals just 63 seconds apart in the second period by 36-year-old captain Tom Kostopoulos (15th) and feisty Bobby Farnham (5th) whose riser on a wobbling puck from the left circle while racing into the zone somehow found an opening to the far post. The score would hold at 2-0 for almost the entirety of the third until Scott Harrington’s desperation backhander from behind the Penguins’ line would bounce its way perfectly all the way down to the back of the empty-net with just 0.8 seconds remaining to conclude the scoring.

Wilkes-Barre/Scranton had only three shots on goal in the third period as the league’s stingiest defense went into their familiar and comfortable shut-down mode to positive results against Lehigh Valley.

The game saw some fairly typical fireworks of the Keystone State Rivalry including the second-ever AHL fight for Jason Akeson who landed a couple of solid rights on Wilkes-Barre/Scranton’s Josh Archibald. The bout was just third-ever for Akeson as a professional and his first fighting major in two years. He had last been assessed a fight in a two-on-two scrap vs. Syracuse on December 14, 2012 and also had a fighting major a month before that while with the Trenton Titans in the ECHL.

But the primary story of the game was the quality of Lehigh Valley chances on net and the sparking saves one after another for Wilkes-Barre’s Matt Murray to preserve the win for the visitors.

“I think we just gotta bare down and find ways to put more pucks in the net,” Taylor Leier said. “We just need a spark. It’s pro hockey and there’s a lot of good players and a lot of good goalies. Right now we’re cold. I’m sure as couple go in here it’s gonna start a spark and we’re going to keep going with it and we’ll get hot.”

The game also represented the Allentown debut of newcomer Cole Bardreau. The rookie center from Cornell University had scored in his first pro game on Friday at Hartford but this was his first opportunity to play in front of the home fans at PPL Center as he steps onto the next rung on the ladder of his hockey development.

“It was fun to get in front of this crowd,” Bardreau said. “This is an awesome building and an awesome environment. Right now I’m here to figure out what it’s like in the AHL and meet some of the guys so that I’m not new to the experience coming in next year.”

Lehigh Valley comfortably out shot Wilkes-Barre/Scranton by a 32-18 margin in the game but were simply unable to break Matt Murray. The Phantoms were 0-for-2 on the power play while the Penguins finished 0-for-3. Lehigh Valley continues to hold the edge in the season series with a 4-3-1 record against Wilkes-Barre this year. The Phantoms and Penguins will meet four more times in the concluding 13 games of the 2014-15 season including a Saturday night return engagement at PPL Center at the tail-end of the homestand.

The Phantoms wore specialty jerseys during pregame warm-ups to benefit Phantoms Charities. Fans racked up some big money to benefit the team’s charitable foundation during a live postgame jersey auction. The kids in attendance were all proudly waving their Street Hockey Sticks, a premium giveaway item for kids age 14 and younger.

The Phantoms continue their four-game home stand this Wednesday, March 25th when Lehigh Valley welcomes the Syracuse Crunch to town for the first and only time this season. Wednesday’s game is another $2 Beer Night with $2 Coors Light drafts available from the time doors open until the start of the 2nd period. And before the game begins, be sure to check out the Sports Industry Career Fair from 3-5 PM featuring the Phantoms, Flyers, Phillies, Iron Pigs and more! A limited number of tickets for Wednesday’s game, which includes admission to the career fair, are available now at pplcenter.com, by calling 610-347-TIXX (8499) or in person at the Mealey’s Furniture Box Office at PPL Center (701 Hamilton).