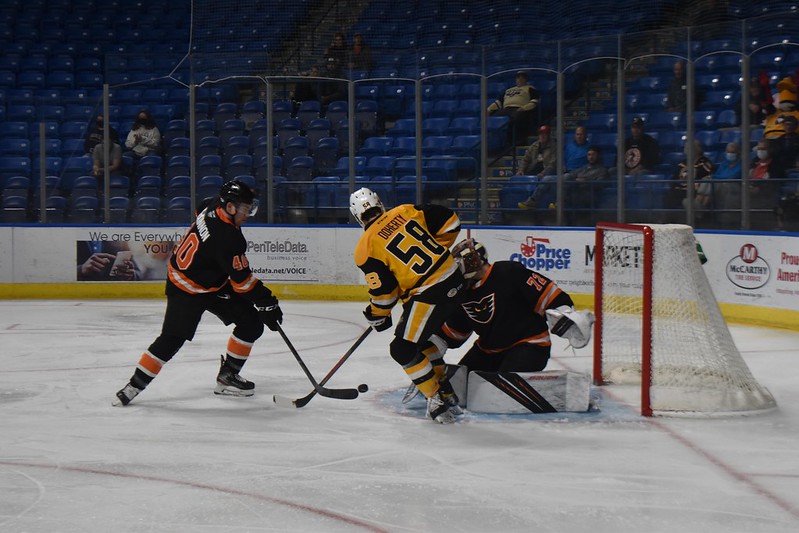 Wilkes-Barre, PA – Tryout defenseman Quinn Schmiemann had a goal and a fight for the Lehigh Valley Phantoms in a 2-1 loss at the Wilkes-Barre/Scranton Penguins on Wednesday night in the preseason opener for both teams. The game also marked the debut of new head coach Ian Lapperiere at the Phantoms’ bench.

The Phantoms employed 11 tryout contract players in the lineup including nine hopefuls on ECHL contracts with Reading or Maine as well as two players who have not signed contracts for the upcoming season. Schmiemann is one of those who has yet to sign. But his performance on Wednesday was certainly an attention grabber. The 6’2″ defenseman from the Kamloops Blazers of the WHL snapped home a power-play drive from the left point in the second period to get the Phantoms on the board. He had dropped the gloves in the first period with 6’4″ tall Jake Flegel of the Penguins.

Brennan Saulnier also dropped the gloves as he got involved with Shaw Boomhower in the second period. 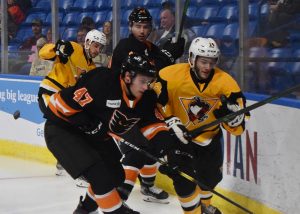 Kirill Ustimenko started for the Phantoms and made 11 saves on 13 shots in his two periods of play. 34-year-old veteran Pat Nagle stopped 7 shots in the third to keep the Phantoms within striking distance.

18-year-old Samu Tuomaala impressed and dazzled with his speed. The Flyers’ second-round selection in the 2021 NHL Entry Draft last July assisted on Schmiemann’s power-play strike and also had a goal of his own on a 2-on-1 with Maksim Sushko but Tuomaala’s one-timer missed wide. Tuomaala also drew a holding call to earn the Phantoms a power play when he pushed through and threatened on a 1-on-2. On a different second-period push, he got agressive on the forecheck disaplying some nice physicality considering he was the youngest player in a game featuring mostly bigger players.

Wilkes-Barre/Scranton had goals from Jamie Devane with 1:06 left in the first period and Jan Drozg just 21 seconds into the second period in building a 2-0 lead. Former Phantoms defenseman Chris Bigras assisted on the team’s first goal that came shortly after a faceoff win.

Lehigh Valley was 1-for-4 on the power play while holding the Penguins to 0-for-4. The Phantoms out shot Wilkes-Barre/Scranton 21-20.

The two teams will rematch at PPL Center on Saturday night and then the Phantoms will travel to Hershey for another preseason game on Sunday. The preseason schedule concludes on Wednesday, October 13 at PPL Center against Hershey.