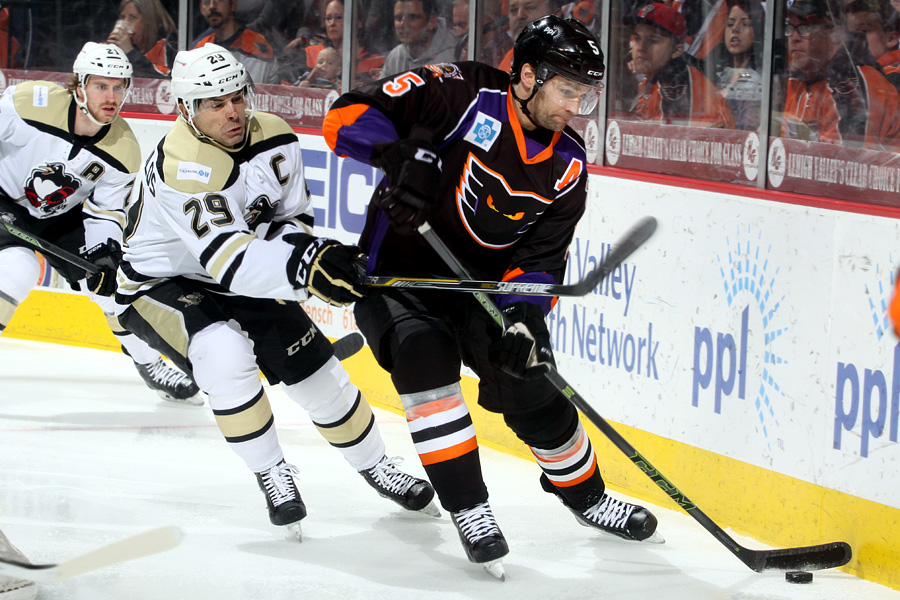 Lehigh Valley, PA – The Lehigh Valley Phantoms pumped 36 shots on the goal of the Wilkes-Barre/Scranton Penguins Friday evening and controlled large portions of the Pennsylvania rivalry showdown but the Penguins were able to escape downtown Allentown with a 3-0 win in front of 8,715 fans at PPL Center. Despite the setback, the Phantoms have still garnered standings points in six of the team’s last eight games overall (4-2-2). 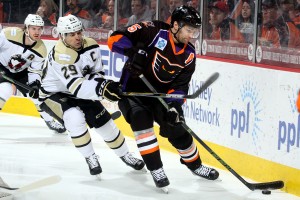 Friday’s decision snapped a two-game winning streak for Lehigh Valley against the Penguins as the Phantoms moved to 4-5 overall this season against their in-state foes.

Dominik Simon (16th, 17th) and Jean-Sebastien Dea (14th) provided the offense for Wilkes-Barre/Scranton while goaltender Tristan Jarry earned the win with a 36-save performance. 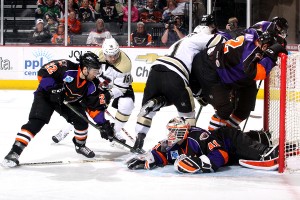 It was the Penguins who landed the game’s first conversion though when, with just under five minutes left in the first period, Dustin Jeffrey sent a pass from below the Phantoms goal line to Simon on the right wing who promptly snapped in his 16th goal of the season. Will O’Neill grabbed the secondary assist on the five-on-five marker netted 15:12 into the opening frame.

The second period produced a more level playing field but didn’t see any additional scoring until the dying moments of the frame when a perfectly executed 3-on-2 rush by Wilkes-Barre/Scranton resulted in Jean-Sebastien Dea’s 14th goal of the year. Tom Sestito and Ty Loney assisted on the even-strength strike notched 19:44 into the middle stanza. 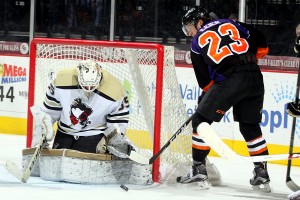 The Penguins carried the momentum of that late second-period conversion into the final frame as Wilkes-Barre/Scranton was able to increase its lead to a 3-0 advantage less than a minute and a half into the third period thanks to Simon’s second goal of the game. Off another successful transition rush, Simon shifted to the backhand before sending in his 17th goal of the season. Kael Mouillierat and Jeffrey garnered assists on the five-on-five tally notched 1:28 into the final stanza.

The Phantoms continued to push until the game’s final buzzer but Jarry and the Penguins defense was able to thwart Lehigh Valley’s relentless attack. All told, the Phantoms out shot the Penguins 36-32 Friday evening.

The Phantoms wrap up this week’s action on Saturday when the team travels to Binghamton for its final meeting of the year with the Senators. The puck drops at Floyd L. Maines Veterans Memorial Arena at 7:05 p.m. Be sure to catch all the action on FOX 1470-AM, online at www.fox1470.com or via the iHeartRadio app beginning with “Countdown to Faceoff” at 6:20 p.m.