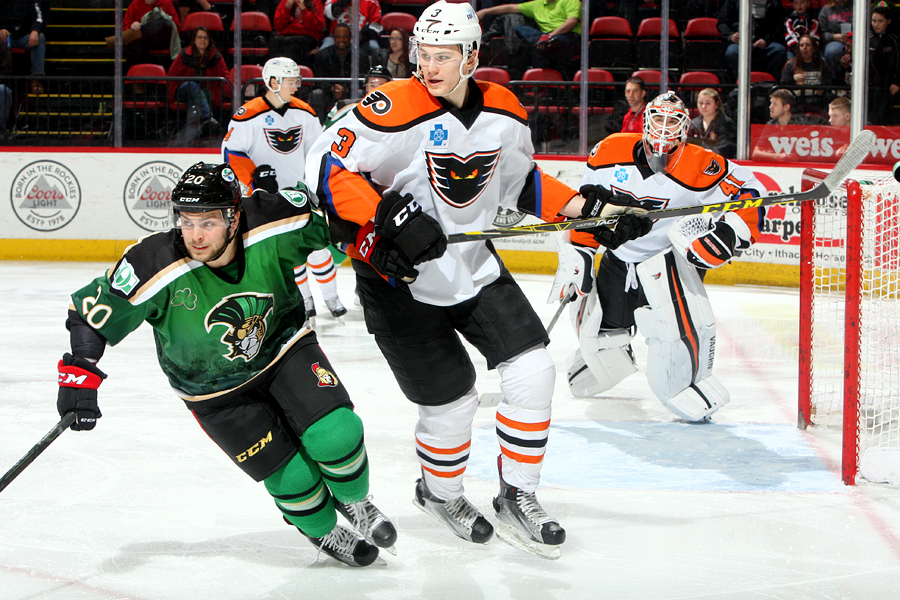 Senators Able to Hold On for 3-1 Decision

Binghamton, NY – The Luck of the Irish was on the side of the Binghamton Senators who were sporting green St. Patrick’s Day themed jerseys helping them hold off the Lehigh Valley Phantoms in a 3-1 final on Saturday night. The Phantoms had won their last three straight road games but were unable to extend the impressive streak in the opener of their five-game road-trip.

Matt O’Connor turned away 34 of 35 shots fired at him from every possible direction and angle as the rookie goalie carried his team to the victory circle. Petr Straka (18th) scored the lone goal of the night for the Phantoms assisted by Cole Bardreau and Colin McDonald. 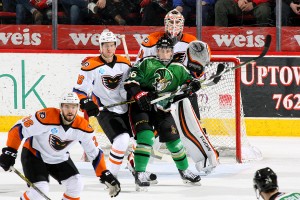 Jason Akeson scored against his former team for his first goal since joining Binghamton from Rochester after he was traded a week ago. Mark Fraser (1st) and Max McCormick (10th) also lit the lamp for the Senators in the final game of the season for the two cross-divisional rivals. Anthony Stolarz was tagged with the tough loss while starting his 10th consecutive game between the pipes for Lehigh Valley.

Former Phantom Kyle Flanagan raced away early in the game on a short-handed breakaway but was denied by Anthony Stolarz. With the puck laying at his right pad play was allowed to continue although Stolarz clearly felt he had secured the puck and was deserving of a whistle. After a Max McCormick rebound try was rejected the puck came out to defenseman Mark Fraser on the left point who unloaded for his first of the season before Stolarz could fully regain his position after receiving contact from the hard-charging McCormick.

The Phantoms protested the decision to allow play to continue to no avail and the goal stood. It was just the second shorthanded strike surrendered all season for the Phantoms and was the first shortie against a goalie. The only other shorthanded tally allowed by Lehigh Valley was of the 4-on-6 empty-net variety a few weeks ago.

Former Lehigh Valley teammates Jay Rosehill and Zack Stortini engaged in a classic, heavyweight bout with both well-known pugilists landing several big punches while not holding back. Rosehill connected on his first several swings in a row before Stortini eventually rallied to land a few of his own. The crowd roared at the old-school classic that goes down as one of the best fights anyone could hope to see at any level of hockey. 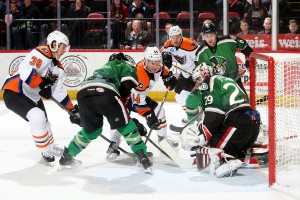 Lehigh Valley came out pressuring in the second period but ex-Phantom Jason Akeson found himself with room to create in the offensive zone and wheeled around to the left-ring where his low snapper found the back of the net behind his former teammate Stolarz. Suddenly the Senators were up 2-0.

The Phantoms turned up the temperature even more and one long rebound came out to big defenseman Samuel Morin whose rocket clanged loudly off the crossbar and away. A few moments later the Phantoms were buzzing again also with Morin helping to create the opportunities. Eventually, Cole Bardreau’s drive rebounded out to Petr Straka who was able to drive home his 18th of the season with 8:55 left in the second period. The important strike was his first since returning from a blocked-shot injury he sustained a couple months ago.

The Phantoms appeared on the verge of evening the score for the rest of the second period and early minutes of the third but somehow the puck would bounce wide of the net or find a defenseman in front or bound off O’Connor.

Buddy Robinson jumped on an opportunity behind the Phantoms net and his backhander through the slot was promptly deposited by Max McCormick for his 10th of the season with 8:28 remaining.

Lehigh Valley out shot the Senators 35-27 in the game. The Phantoms were 0-for-4 on the power play while Binghamton finished 0-for-2.

The Phantoms road-swing continues on Wednesday night at the rival Wilkes-Barre/Scranton Penguins in a rematch of Friday’s tilt at PPL Center. The puck drops at Mohegan Sun Arena in Wilkes-Barre at 7:05 p.m. Be sure to catch all the action on FOX 1470-AM, online at www.fox1470.com or via the iHeartRadio app beginning with “Countdown to Faceoff” at 6:20 p.m.

The Phantoms return home on Sunday, March 20 against the Portland Pirates on Autograph Night with the Phantoms players after the game. Lehigh Valley also has home games slated for March 23, 25 and 26 on the four-game homestand. Purchase your tickets in advance at PPLCenter.com