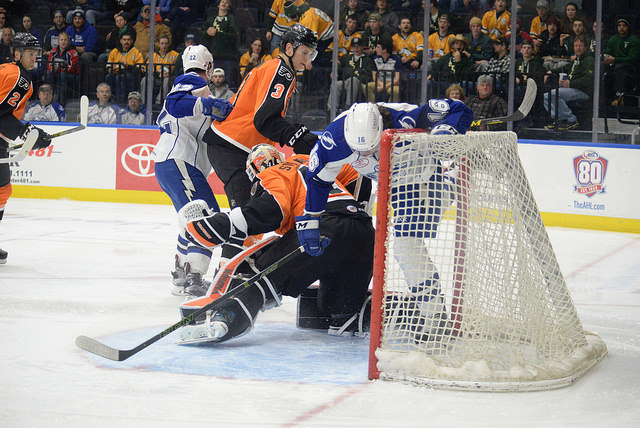 Phantoms 3-2 Shootout Win in Another Heart-Stopper

Syracuse, NY – Stolarz saved his most sensational game of the season for Syracuse. With a 51-save effort etching his name into the Phantoms record books, the big netminder led the Lehigh Valley Phantoms to a thrilling 3-2 shootout win at the Crunch on Wednesday night. “Stolie the Goalie” established a new franchise mark for most stops in a regular season game breaking the old record of 50 saves by Carsen Chubak on April 6, 2014 for the Adirondack Phantoms against the Albany Devils. 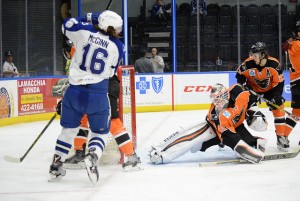 That’s an especially impressive feat when one also remembers that the Phantoms are in their 20th season as a franchise beginning in the 1996-97 campaign as the Philadelphia Phantoms. At no point in the long and successful history of the team had a goalie steered aside 51 shots in a regular season game. But Stolarz did exactly that on the 53 total shots he faced in a near super-human effort to guide the Phantoms another point closer in the Eastern Conference playoff chase. Bridgeport lost their game against Hartford in overtime 4-3 thus the Lehigh Valley Phantoms now find themselves five points back of the Sound Tigers who currently hold down possession of the last postseason spot with just 18 games remaining in the regular season.

Danick Martel (20th) and Cole Bardreau (10th) lit the lamp for the Lehigh Valley strikes while Mike Blunden (19th) and former Phantom Tye McGinn (18th) found the back of the net for Syracuse. McGinn’s goal with 29.1 seconds remaining in the third pushed the game onto overtime and came later in the same period in which he was robbed on the most spectacular Stolarz stop of the evening on a backdoor blast that somehow was kicked out via the left leg.

The tight contest was the seventh consecutive one-goal decision for the Phantoms who have secured standings points in six of those games posting a 4-1-2 mark. Lehigh Valley also now has points in 12 of their most recent 17 games boasting a mark of 10-5-2 in that span.

Syracuse came out flying from the start of the game and Stolarz was ready for the speedy Crunch attack turning aside all 17 drives sent his way in the opening period.

The Phantoms would draw first blood on Danick Martel’s deflection in the slot of a perfectly placed shot-pass by Max Lamarche from the blue-line. The rookie Martel provided Lehigh Valley with the 1-0 advantage at 3;15 into the second period with his team-leading 20th goal of the season while Aaron Palushaj recorded the secondary assist on the play. 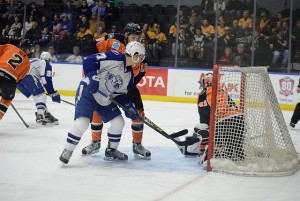 Syracuse kept peppering away on Stolarz from every possible angle. Shots came from near and far and finally a bit of a lucky bouncer would lead to their equalizing goal at 11:39 into the second period on their 30th shot of the night. A shot by New Jersey native Anthony DeAngelo knocked the stick out of the hands of Tyrell Goulbourne then glanced off a body in front of the net, rebounded off the end-boards, and then fortuitously caromed out to Mike Blunden on the backdoor on the right side of the cage who was able to deposit his Crunch pace-setting 19th of the season behind a scrambling Stolarz.

The Phantoms were out shot in the second period 17-6 and at that point in the game the overall margin was 34-17 but Stolarz with his tremendous effort in his eighth consecutive start had the game deadlocked at 1-1.

The comeback kids would not have to overcome a third period deficit as they had shown as a strength in recent nail-biters. Cole Bardreau snapped home a go-ahead goal blocker-side on Crunch goalie Adam Wilcox with 10:30 left on a rush into the zone with Colin McDonald racing up the right wing to connect with the talented rookie from Cornell University. 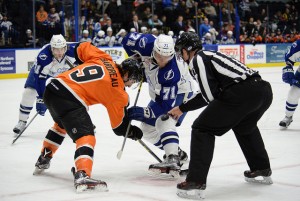 The Crunch had one final regulation push left in them and were finally able to connect with an equalizer courtesy of Tye McGinn on the left of the cage with 29.1 seconds left on a cross-slot feed by Mike Blunden setting up the backdoor tap-in.

Stolarz turned aside all five Crunch drives in the 3-on-3 overtime session on his way to Phantoms history. His last save was one of his better stops of the night. With just one tick remaining in overtime, Dylan Blujus unleashed a rocket from the right circle that Stolarz was able to reach across and barely deflect away with the blocker.

Taylor Leier’s five-hole goal in the second round of the shootout was the only score for either side as Stolarz stopped all three attempts by the Crunch to secure the exciting triumph.

The 53 shots allowed is also an all-time record in a Phantoms regular-season game equaling the 53 shots registered by the Albany Devils on April 6, 2013 when Carsen Chubak’s 50 save performance helped lift the Adirondack Phantoms to a 4-3 victory. The game was the second time in the past two weeks for the Crunch to register 53 shots in a game yet find themselves unable to secure the victory.

The Phantoms are back at home on Friday night against the rival Wilkes-Barre/Scranton Penguins on another great 20 Years of Phantoms Night at PPL Center featuring a commemorative poster giveaway while the players once again don their magnificent throwback-style purple and black jerseys. Following the Friday engagement, the Phantoms will embark on a season-long five-game road swing which commences on Saturday night at the Binghamton Senators.