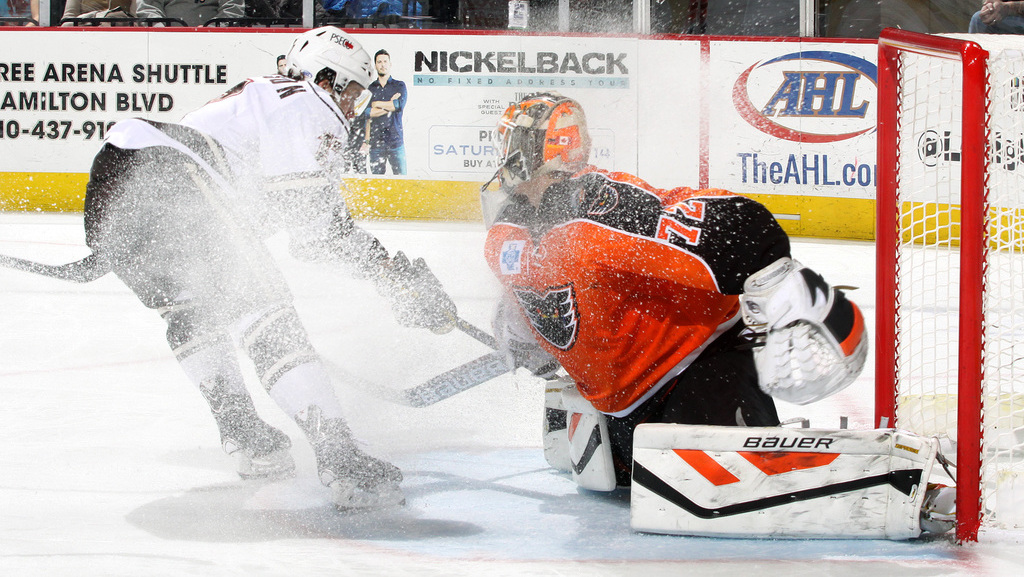 Lehigh Valley, PA – A mascot-filled birthday party for meLVin, free youth jerseys and an assist that moved Jason Akeson into sole possession of sixth place on the Phantoms all-time scoring list highlighted another sold-out night of hockey at PPL Center as the visiting Hershey Bears handed Lehigh Valley a 6-1 setback. The first 3,000 kids in attendance received FREE youth hockey jerseys and those sweaters were prominently displayed throughout the 8,743 fans in downtown Allentown Saturday evening as the Phantoms enjoyed their 11th standing room-only sellout this season.

Taylor Leier converted his 10th goal of the season for Lehigh Valley while Nick Cousins and Jason Akeson garnered assists for the Phantoms. For Cousins, his recent stellar play continued as the 21-year-old pivot secured his 13th points (five goals, eight assists) over the last 10 games. 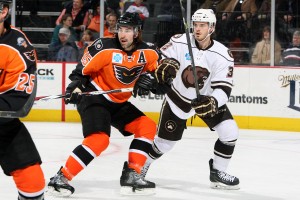 Meanwhile, Akeson secured his 12th assist and 20th point this year as the 24-year-old moved into sole possession of sixth place on the Phantoms’ all-time scoring list with 192 total points. He is now just eight points shy of becoming just the fifth player in franchise history to produce 200 points in a Phantoms jersey.

Six different skaters found the back of the net for Hershey with Connor Carrick (goal, assist) and Casey Wellman (two assists) leading the offensive charge for the Bears. Hershey’s Philipp Grubauer earned the victory in goal after 24 saves on 25 shots while Anthony Stolarz and Rob Zepp combined to turn aside 29 of the Bears’ 35 total offerings.

Before the puck even dropped, fans were treated to some festive pre-game entertainment as each of meLVin’s special mascot guests, including the Phillie Phanatic, Tux from the Wilkes-Barre/Scranton Penguins, Hat Trick from the Norfolk Admirals and Hershey’s Coco, were introduced at center ice along with the birthday boy himself.

Hershey opened the scoring Saturday evening when a turnover in the Lehigh Valley zone landed on the stick of Liam O’Brien who promptly snapped in his first career AHL goal. The unassisted even-strength strike came 3:30 into the opening frame.

The Bears doubled their lead just past the midway point of the first period when a sharp-angle bid by Chris Conner just slipped under Stolarz’s arm before ever-so-slightly crossing the Phantoms goal line. Carrick and Tim Kennedy assisted on Conner’s 10th conversion of the season which came 10:11 into the opening stanza. 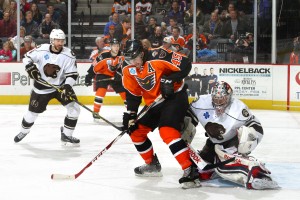 With Hershey holding an early-game advantage, Phantoms bench boss Terry Murray, a veteran of more than 1,350 games as a professional head coach, elected to use his team’s one and only timeout in the game just past the midway point of the opening period. The decision paid immediate dividends as Lehigh Valley sliced the Bears’ lead in half just moments later when Cousins threw a puck to the front of the net, which produced a juicy rebound atop the goal crease that was promptly punched in by Leier. Akeson earned the secondary assist on the even-strength conversion generated 12:02 into the first frame.

The end-to-end hockey action didn’t stop after the Phantoms and Bears retreated to the dressing room at the first intermission as meLVin and his mascot guests took to the ice for a game with the Lehigh Valley Phantoms Youth Squirts. The showdown featured some outstanding hockey as well as a few mascot shenanigans but no moment was more impressive than when Tux found himself all alone on a breakaway only to be denied not once, but twice by the Squirts netminder.

Hershey then started to pull away with three goals in the middle stanza. First, Carrick secured his seventh goal of the season just under seven minutes into the period. Wellman and Stanislav Galiev assisted on the nicely-executed transition finish 6:50 into the period.

Then, Jon Landry snapped home his second goal of the season with a blistering wrist shot from the slot. Wellman and Jim O’Brien garnered assists on the even-strength strike notched 15:29 into the middle frame that ended the evening for Stolarz. In all, the rookie netminder produced 18 saves on 22 shots on the evening. Just 33 seconds later and on the very first shot Zepp faced, the Bears capped their second-period surge with Dustin Gazley’s sixth tally of the year. Dane Byers and Kris Newbury assisted on the five-on-five marker. 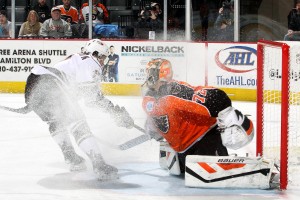 The Bears landed the final conversion of the game just past the midway point of the third period when Chandler Stephenson orchestrated a stunning breakaway that left Zepp with little to no chance of keeping the puck from crossing the goal line. The unassisted five-on-five goal was Stephenson’s fourth marker of the season.

All told, Hershey out shot Lehigh Valley 35-25. The Bears also produced the only power play conversion in the game as Hershey went 1-for-5 with the man-advantage while the Phantoms were 0-for-6.

The Phantoms have an opportunity to end their busy week on a high note though when the team heads to Wilkes-Barre/Scranton for a rivalry showdown with the Penguins on Saturday. Puck drop is set for 7:05 PM and fans can catch all the action on Fox 1470 AM, online at fox1470.com or via the iHeartRadio app. Coverage begins at 6:20 PM with the Nazareth Pallett Countdown to Faceoff.

The Phantoms then return to PPL Center on Wednesday, February 4th as they welcome the Worcester Sharks to town for the final time this season. Wednesday’s game features yet another opportunity to meet Phantoms players up close and in person as the team hosts a post-game skate with the Phantoms following the conclusion of the game. Bring your skates to the game that night and then take to the ice with your favorite players afterwards. Wednesday’s contest is also another $2 Beer Night as $2 Coors Light drafts will be available from the time doors open until the start of the 2nd period. $2 beers will be available behind Section 108.