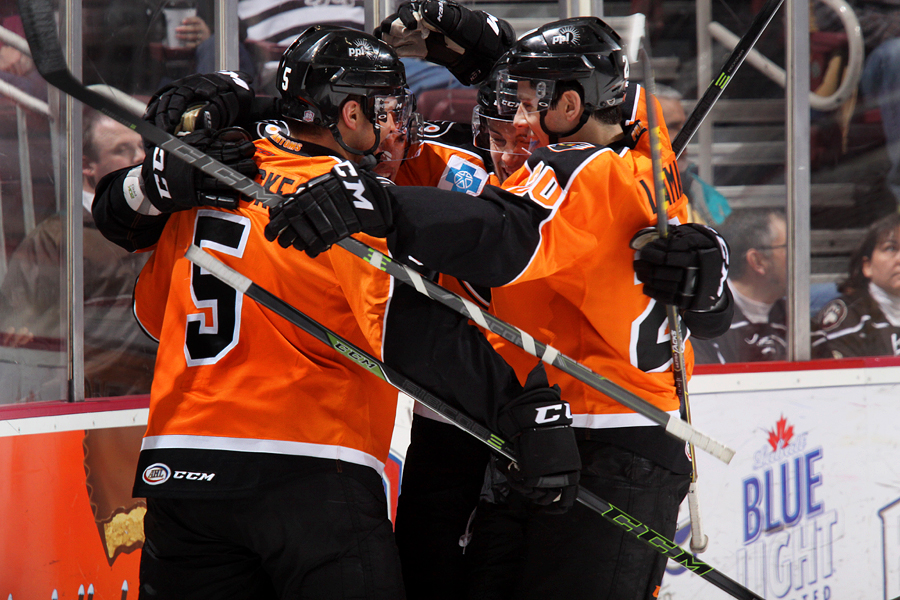 Hershey, PA – Cole Bardreau (2 goals), Taylor Leier (goal, 2 assists) and Chris Conner (3 assists) led a resilient attack Monday evening as the Lehigh Valley Phantoms earned a 6-5 shootout win at the Hershey Bears. With the win, the Phantoms improved to 19-21-2-1 overall this season and are now just six points back of the Providence Bruins for the fourth and final playoff spot in the Atlantic Division. Meanwhile, Lehigh Valley moved to 12-8-1-1 on the road this season and now boasts the third-highest road wins total in the Eastern Conference. The Phantoms are also now 4-1 in games decided via shootouts this year.

Monday’s clash, which was previously scheduled for Saturday, January 23 but had to be postponed due to inclement winter weather, marked the ninth of 12 total meetings this season between the Phantoms and Bears as Lehigh Valley improved to 6-3 head-to-head against its in-state rival. The Phantoms are also now an impressive 3-1 in games played at Giant Center in Hershey.

Bardreau’s two-goal effort marked the first multi-goal game of his professional career while Colin McDonald and Davis Drewiske each registered a goal and an assist in the triumph. Meanwhile, with three assists, Conner matched a season-high for helpers in a single game equaling the three assists dished out by Nick Cousins against the Rochester Americans on November 13, which came just two days after Evan Rankin’s three-assist effort against the Binghamton Senators.

All-Star goaltender Anthony Stolarz earned his 13th win of the season between the pipes thanks to a 26-save performance.

Lehigh Valley’s special teams was a big component of the victory as the Phantoms produced a pair of power play markers in five opportunities while the team’s penalty kill successfully thwarted seven of Hershey’s eight man-advantage opportunities.

Monday’s game marked the Phantoms debut of forward Phil DeSimone who signed a PTO (professional try-out) with the club last Friday. It also marked the Lehigh Valley debut this season for defenseman Adam Comrie, who collected an assist in his return to the Phantoms.

The Phantoms opened the scoring with a shorthanded conversion in the final minute of the first period. After a face-off win in the defensive zone, Drewiske wrapped the puck along the boards which sprung Leier and Bardreau on a 2-on-1 break. After Leier’s wrist shot from the right wing rattled off the post, Bardreau was there to pounce on the rebound for his third goal of the season. Leier and Drewiske assisted on Lehigh Valley’s fifth shorthanded tally of the season.

Hershey leveled the contest and captured its first lead of the night with a second-period burst that saw the Bears net three goals in a 3:04 span. First, Mike Moore evened the tilt with a seeing-eye shot from the left point for his fourth goal of the year. Then, Madison Bowey put Hershey in front with his third goal of the season netted 8:41 into the middle frame. Finally, the Bears doubled their advantage less than two minutes later when Paul Carey converted his 13th goal of the year off a tremendous setup from Scott Gomez.

The Phantoms didn’t back down though and answered Hershey’s surge with a a trio of second-period goals of their own to regain the lead.

First, an exceptional move along the right wing by McDonald produced a point-blank opportunity that was thwarted by Hershey goaltender Justin Peters but generated a rebound on the left side that was promptly swatted home by Bardreau for his second goal of the game and fifth of the season. McDonald earned the only assist on the five-on-five conversion scored 13:19 into the middle frame, which capped the first professional multi-goal game for Bardreau.

Lehigh Valley then leveled the contest just over four minutes later when Conner fed a perfect cross-ice pass to Drewiske who made no mistake in directing in his second goal of the season from just atop the goal crease. Aaron Palushaj garnered the secondary assist on the even-strength strike scored 17:39 into the second period.

The Phantoms then re-established the lead just over a minute later when, while on the power play, Leier pounced on a rebound produced from a McDonald offering in the slot for his 11th goal of the year. Conner collected the second assist on the man-advantage marker netted 18:52 into the middle stanza.

After closing the second period with a power play conversion, Lehigh Valley opened the final frame of regulation with another man-advantage marker. After an exceptional entry by Leier, Conner fed a cross-ice pass right to the tape of McDonald on the right wing who promptly snapped in a sizzling wrist shot for his fourth goal of the year. Conner and Leier assisted on the power play tally converted 4:14 into the third period.

As is the case in rivalry showdowns, the opposition didn’t go away quietly as the Bears were able to even the contest back up thanks to a pair of goals just over a minute apart. First, Travis Boyd netted his ninth goal of the season 13:06 into the final period from Sean Collins and Connor Carrick. Then, Chris Bourque became the second AHLer this season to reach the 20-goal mark as he leveled the contest 5-5 with a power play conversion scored 14:17 into the final frame. Gomez and Riley Barber assisted on the equalizing marker.

The Phantoms weren’t to be denied though as both Leier and Nick Cousins converted in the shootout while Stolarz denied two of three Hershey attempts in sealing the victory for Lehigh Valley. With the shootout triumph, the Phantoms are now tied for second in the league with four shootout victories this year.

The Phantoms are back in action at PPL Center this Wednesday, January 27 for First Responders Appreciation Night in a 7:05 p.m. clash with the Binghamton Senators. Be sure to secure your tickets now at pplcenter.com, by calling 610-347-TIXX [8499] or in person at the Mealey’s Furniture Box Office at PPL Center [701 Hamilton Street].