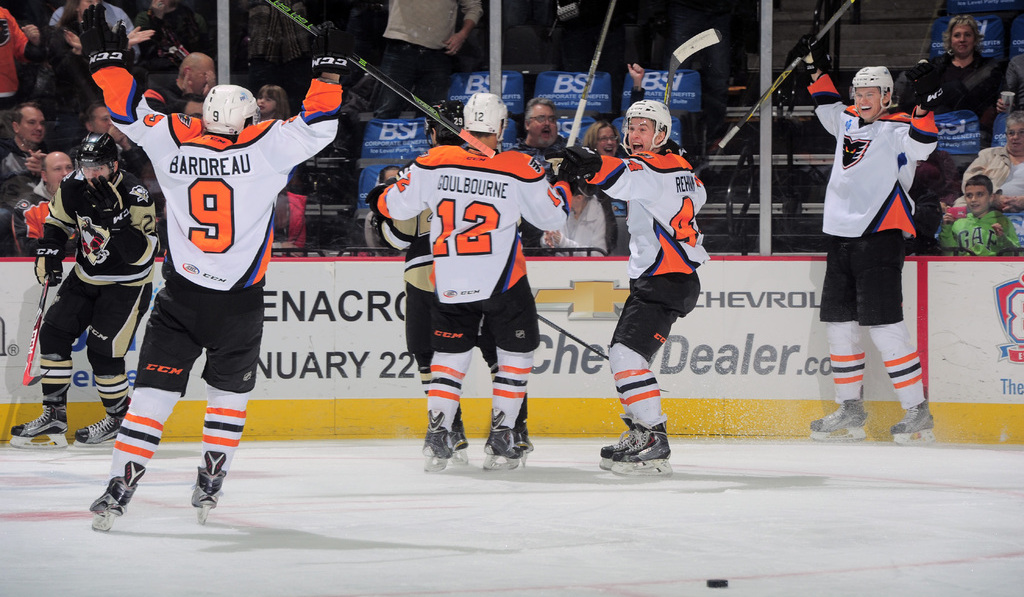 After seeing the team’s lone scheduled game last week postponed due to Winter Storm Jonas, the Lehigh Valley Phantoms (18-21-2-1, 39 pts., 7th Atlantic Division) get an early start to their week before returning to PPL Center for rivalry showdowns this Wednesday and Friday. 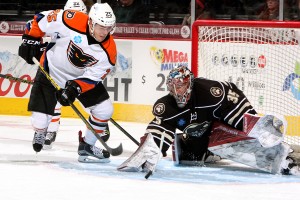 Lehigh Valley’s push toward the 2016 Calder Cup Playoffs continues tonight, January 25 when the Phantoms invade the Giant Center in Hershey for a rivalry showdown with the Bears. This evening’s contest was originally scheduled to be played on Saturday, January 23 but had to be rescheduled due to inclement winter weather.

Hershey (22-13-2-5, 49 pts., 3rd Atlantic Division) earned a 4-0 shutout at the Binghamton Senators last Friday in its only game of the week. In addition to having to postpone their Saturday evening contest with the Phantoms, the Bears also had to postpone Sunday’s tilt with the Bridgeport Sound Tigers. Hershey enters the week having won six of its last nine games overall and is 14-5-1-3 when skating at Giant Center this season.

Tonight’s contest will mark the ninth of 12 total meetings during the 2015-2016 regular season between Lehigh Valley and Hershey with the Phantoms holding a 5-3 record head-to-head against their in-state foes. Lehigh Valley has claimed three of the last four rivalry showdowns and is 2-1 in three previous tilts in Hershey. The Bears will skate at the Albany Devils and Syracuse Crunch later this week before hosting the Crunch in Hershey on Saturday. 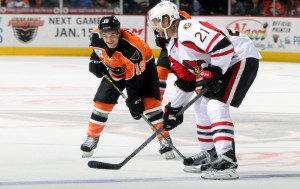 The Phantoms then return to PPL Center on Wednesday, January 27 for First Responders Appreciation Night when they welcome the rival Senators back to downtown Allentown. Binghamton (15-22-3-0, 33 pts., 7th North Division) is currently last among the seven teams in the North Division and holds the lowest standings points total in the Eastern Conference. The Senators dropped both games last week – a 4-0 decision vs. Hershey on Friday followed by a 3-2 setback to Syracuse on Saturday – and enter the week in the midst of a modest three-game losing skid.

Wednesday’s tilt will mark the sixth of eight total meetings this season between Lehigh Valley and Binghamton with the Phantoms holding a 1-3-1 mark head-to-head against the feisty Senators. Despite a dominant effort in which Lehigh Valley out shot Binghamton 30-20, the Senators claimed the most recent meeting by escaping PPL Center with a 2-1 win back on January 10.

The Phantoms are then back at work in downtown Allentown on Friday, January 29 when they welcome the Wilkes-Barre/Scranton Penguins to town for a 7:05 p.m. clash. WB/Scranton (29-11-0-1, 59 pts., 1st Atlantic Division) continues to boast the highest point total in the Atlantic Division and second-highest in the entire AHL. The Penguins, however, earned just one win in three tries last week capturing a 5-0 triumph at the Portland Pirates on Saturday in between a 2-1 setback in Portland on Friday and a 5-2 loss at the Providence Bruins on Sunday. Following a seven-game winning streak to open the month, WB/Scranton enters the week having dropped three of its last four games overall. 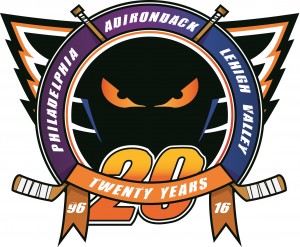 Friday’s showdown will mark the seventh of 12 total meetings this season between the Phantoms and Penguins with Lehigh Valley holding a 2-4 mark against its in-state rivals. Friday’s game is another “20 Years of Phantoms” night as the team will wear specialty throwback jerseys. The contest also features the third of four commemorative poster giveaways free to the first 3,000 fans in attendance. A limited number of tickets remain for both Wednesday and Friday’s games and can be secured online at pplcenter.com, by calling 610-347-TIXX [8499] or in-person at the Mealey’s Furniture Box Office at PPL Center [701 Hamilton Street].

Lehigh Valley then plays its final game in advance of the AHL All-Star Break on Saturday, January 30 when the Phantoms invade Mohegan Sun Arena in Wilkes-Barre/Scranton to complete a home-and-home series with the Penguins. Lehigh Valley is an impressive 2-1 when skating at Mohegan Sun Arena this season following a 3-1 victory on December 4 followed by a 3-0 triumph on December 27.

Service Electric’s TV2 Sports will be broadcasting live all of the Phantoms’ 17 remaining regular season home games. If you can’t make it out to the rink, be sure to catch all the exciting action live in HD quality with Steve Degler, Peter Zingoni, Doug Heater and Kristi Fulkerson! Pre-game coverage begins with “Phantoms Front and Center” 30 minutes before puck drop. And don’t miss “Phantoms – Breaking the Ice” every Monday from 7:00 – 7:30 p.m. throughout the season live at Chickie’s & Pete’s at PPL Center!

Tickets for all of the Phantoms’ 17 remaining regular season home games are available now online at pplcenter.com, by calling 610-347-TIXX [8499] or in-person at the Mealey’s Furniture Box Office at PPL Center (7th & Hamilton).