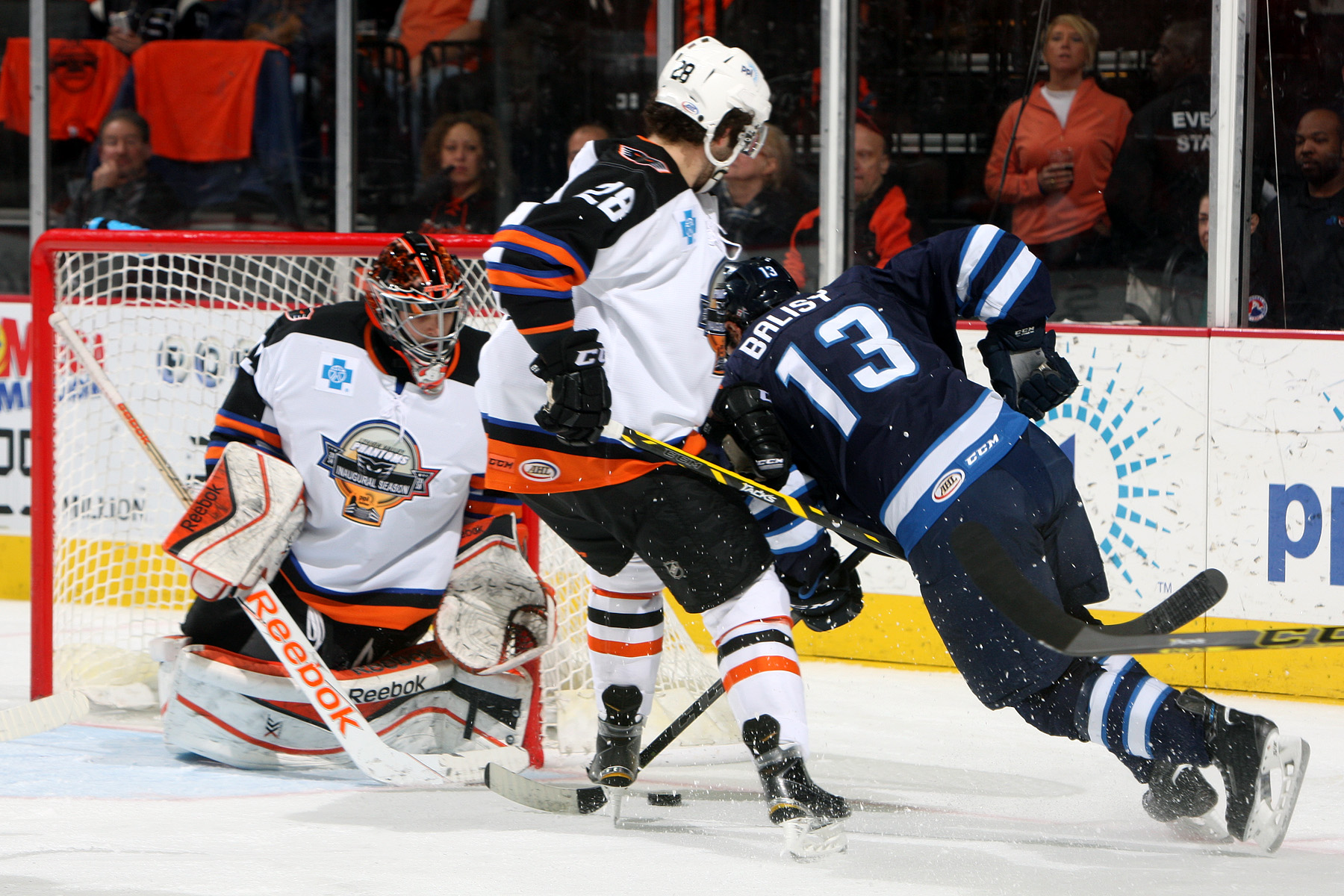 The Phantoms drew over 8,900 for the third time this season with over 500 Standing Room fans jamming into the team’s spectacular, new digs at the corner of 7th and Hamilton. The humongous turnout beat the team’s old attendance mark by 65 people; Lehigh Valley had previously established their attendance record of 8,918 on December 27 in a victory over the Norfolk Admirals. 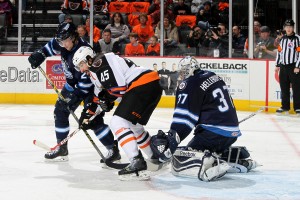 Straka and Goumas notched assists on each others’ goals for two-point efforts on a line combined with Brandon Alderson that has suddenly surged with a recent bevy of tallies. The rookie Goumas has come alive now with goals in back-to-back games this weekend while the second-year pro Petr Straka has struck in three consecutive games. Gordon had previously scored in back-to-back games at St. John’s two weekends ago to burn his former team and then turned the trick again. Gordon was the Team MVP for the IceCaps last season with 23 goals on a squad that advanced to the Calder Cup Finals.

Martin Ouellette has perhaps benefited the most from the boost of the big crowds. He has started all three games when the Phantoms have drawn over 8,900 fans and all three of his wins have come in those games. Ouellette outdueled a fellow rookie goaltender out of the Hockey East named Connor Hellebuyck in the game. Ouellette with the University of Maine went 1-0-1 last year in matchups against Hellebuyck who was with U-Mass Lowell. And Ouellette was able to continue that success against his former college rival to the professional level.

It was a nice way to conclude play heading into the AHL All-Star Break. Except for Brandon Manning who will represent the Phantoms on the Eastern Conference squad in Utica, the players have the next few days off before next Thursday’s matchup with the Albany Devils.

The Phantoms also wore snazzy specialty jerseys for the game celebrating the team’s inaugural season. After the game, the players returned to the seats to present the jerseys to excited fans winning the “game worns” in a postgame auction. It was also T-Shirt Time again at PPL Center with the fans arriving to the game greeted by orange t-shirt gifts adorning every seat in the house. 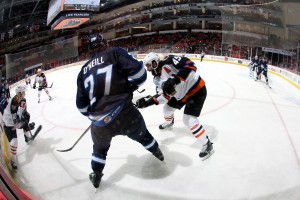 The Phantoms burst out to another strong start in this contest as Lehigh Valley connected on the game’s opening tally just over two minutes into the first period. After a double-crunch collision between Gordon and Zack Stortini on IceCaps defenseman Julien Brouillette along the end boards, Stortini supplied another jostle on the half wall that forced a St. John’s turnover in the slot that produced a two-on-one in the low slot between Gordon and Nick Cousins. After delaying just long enough to free up a passing lane, Cousins slipped a perfect feed to Gordon on the back door who made no mistake in sending in his team-leading 13th goal of the season. Gordon is now tied with Cousins for the most goals on the Phantoms.

The five-on-five conversion came just 2:22 into the tilt and marked the sixth time in the last eight games that the Phantoms have produced the game’s first goal. Lehigh Valley is 13-6-3 when drawing first blood on the scoresheet. The Phantoms also eventually made it to the “magic number” of three in this game improving their record to 17-1-1 when scoring three or more goals.

St. John’s was able to level the tightly-contested showdown just past the midway point of the opening period when, while on the power play, Will O’Neill blasted in his seventh goal of the season with a seeing-eye slap shot from the right point that settled into the upper left hand corner of the Phantoms cage. Brenden Kichton garnered the only assist on the man-advantage marker tallied 11:26 into the first period. O’Neill’s goal came against his former teammate from the University of Maine. Both he and Ouellette played together for the Black Bears three seasons ago.

The score remained tied at 1-1 through a scoreless second period that saw the game open up somewhat with both teams generating good chances. A pipe-shot from Brandon MacLean followed by a point-blank chip in the crease just wide by Chase Balisy that perhaps went off the leg of Martin Ouellette almost allowed the IceCaps to take the lead. They carried over some of that momentum to the beginning of the third but following a scramble in the Lehigh Valley end, the Phantoms were able to race up ice with Brandon Alderson quickly securing the puck in the corner and then finding Goumas on the back door in the right circle who perfectly slammed in the one-timer.

Just a few minutes later, Lehigh Valley’s lead was up to 3-1 when Petr Straka pounced on the rebound of a Steven Delisle right-point slapper which resulted from a sharp cross-ice pass by Goumas from the left boards.

Less than a minute later, St. John’s took advantage of a pair of Phantoms’ penalties for a 5-on-3 tally at 8:41 with Will O’Neill driving home his second of the night, this time from the right point.

The Phantoms lead went back up to two when Ryan White battled for a puck in the corner and then connected with Taylor Leier on the right dot. The 20-year-old rookie from the Portland WinterHawks was perfectly placed to drive home his ninth of the season for a 4-2 lead at 11:08 into the third period.

A 6-on-5 goal by Carl Klingburg pulled St. John’s back to within one with just under a minute remaining and would make the closing moments a bit more interesting but the Phantoms would hang on from there for the hard-earned victory.

Lehigh Valley finished the season series against the Winnipeg Jets affiliation with a 3-0-1 record. The Phantoms improved to 12-4-3 on home ice.

After the All-Star break, the Phantoms go right back to work with three games in three days, including a pair of contests next Thursday and Friday at PPL Center. Friday, Lehigh Valley welcomes the Albany Devils to downtown Allentown for the final time this season on Thursday, January 29th. Then, it’s another rivalry showdown with the Hershey Bears on Friday, January 30th. Friday’s contest features a free youth jersey giveaway for the first 3,000 kids in attendance (ages 14 and under) and is also meLVin’s Birthday Bash as everyone’s favorite puck-nosed pladottle celebrates with some of his craziest mascot friends.

Tickets for both highly-anticipated match-ups are available now at the Mealey’s Furniture Box Office at PPL Center (701 Hamilton), by calling 610-347-TIXX (8499) or online at pplcenter.com.