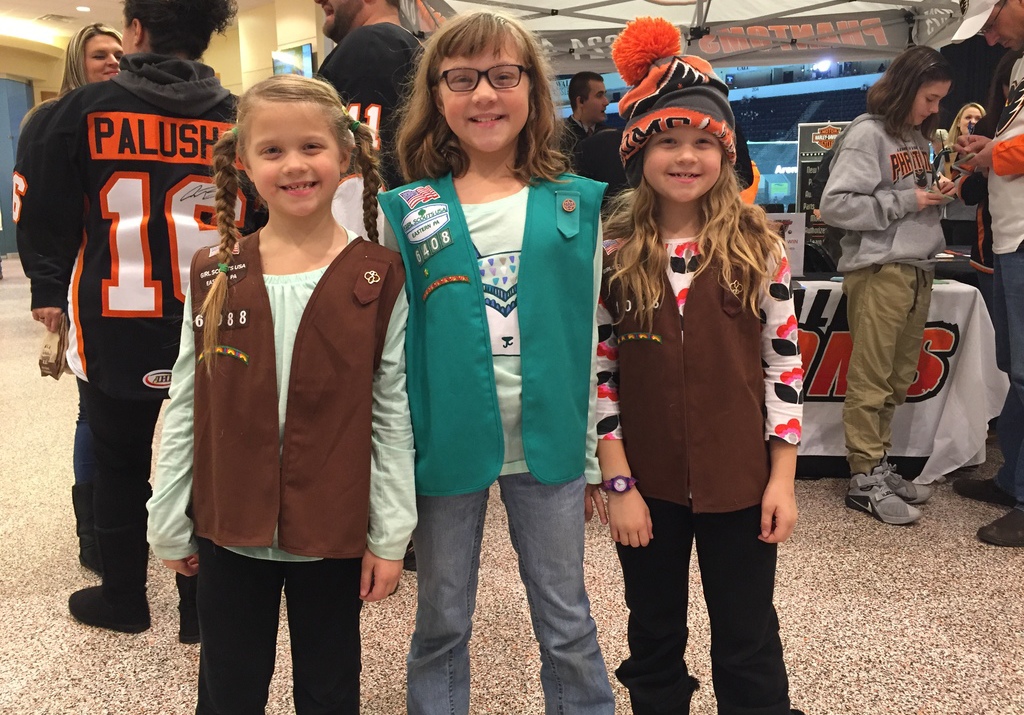 Lehigh Valley, PA – Chris Conner scored his second goal in as many games and All-Star goaltender Anthony Stolarz recorded 26 saves Saturday evening as another strong effort by the Lehigh Valley Phantoms produced another one-goal decision as the Hartford Wolf Pack were able to hang on for a 2-1 win in front of 9,046 fans at PPL Center.

The jam-packed crowd is the largest to enjoy a Phantoms game in downtown Allentown since the PPL Center opened its doors last Fall. Saturday’s crowd soared past the previous high of 9,017 fans who watched the Phantoms do battle with the Wilkes-Barre/Scranton Penguins on March 28, 2015. What’s more, the capacity crowd was the fifth straight standing room-only sellout produced by Lehigh Valley fans and the 10th capacity crowd overall this season. 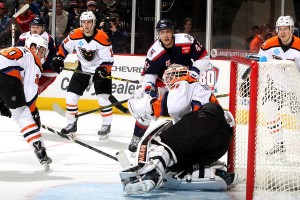 A big reason for the raucous turnout was that Saturday’s game was the highly-anticipated Girl Scout Night. Troops from across the Lehigh Valley were represented as more than 1,300 scouts, leaders, family and friends were in attendance.

Conner produced his seventh goal of the season and second tally in as many nights in the decision. Meanwhile, Stolarz was rock solid between the pipes turning aside 26 of Hartford’s 28 total offerings. Recently named to the 2016 AHL All-Star Classic, the 21-year-old goaltender now boasts the league’s seventh-best goals-against average (2.31) coupled with the AHL’s sixth-highest save percentage (.920).

Mat Bodie (4th goal) and Adam Tambellini (10th) each scored for the Wolf Pack while goaltender Magnus Hellberg earned the win between the pipes with a 26-save performance.

Fresh off a third period in which they outshot the Hershey Bears 27-1 last evening, the Phantoms experienced a more level frame to kick start their first PPL Center showdown with the Wolf Pack. The two sides combined for 17 total shots in the first period but neither goalie was willing to budge. Stolarz denied each of Hartford’s 11 opening period offerings while Hellberg successfully answered Lehigh Valley’s six shots on goal. 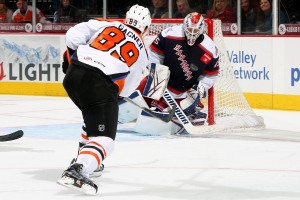 The Phantoms broke the scoreless deadlock just prior to the midway point of the contest when Sam Gagner authored a cross-ice saucer pass from the right wing that deflected off the stick of Hartford’s Travis Oleksuk in the slot before landing on Conner’s twig on the left side who made no mistake is sending home his seventh goal of the season. Andrew MacDonald garnered the secondary assist on the even-strength strike netted 9:46 into the middle stanza. Gagner’s primary assist gives him points in four of his last five games while MacDonald moved into a tie for sixth among all AHL defenders in total scoring with 23 points.

The Wolf Pack leveled the contest less than five minutes later when Bodie was able to convert his fourth goal of the year from just atop the Phantoms goal crease. Chris McCarthy and Oleksuk assisted on the five-on-five tally scored 14:38 into the second period.

Hartford then grabbed its first lead of the night and the eventual game winner less than two minutes into the third period when Tambellini converted on the power play for his 10th goal of the season. Tambellini’s opportunity came after a sizzling slap shot from Ryan Graves on the left wing rattled off Stolarz’s mask producing a rebound chance for Tambellini on the right side. Ryan Bourque collected the second assist on the man-advantage marker scored 1:51 into the final frame.

The power play goal was just the third surrendered by Lehigh Valley’s penalty kill over the last 12 games. During its recent surge, the Phantoms have successfully killed 37 of their last 40 man-down situations producing a jaw-dropping 92.5 percent efficiency rating over that stretch.

The Phantoms conclude this week’s action on Sunday when the team heads to Bridgeport for a 5:00 p.m. showdown with the Sound Tigers. Be sure to catch all the action on 790-AM WAEB, online at 790waeb.com or via the iHeartRadio app beginning with “Countdown to Faceoff” at 4:30 p.m.

The Phantoms are then back in action at PPL Center on Wednesday, January 27 for a 7:05 p.m. clash with the Binghamton Senators. Be sure to secure your tickets now at pplcenter.com, by calling 610-347-TIXX [8499] or in person at the Mealey’s Furniture Box Office at PPL Center [701 Hamilton Street].