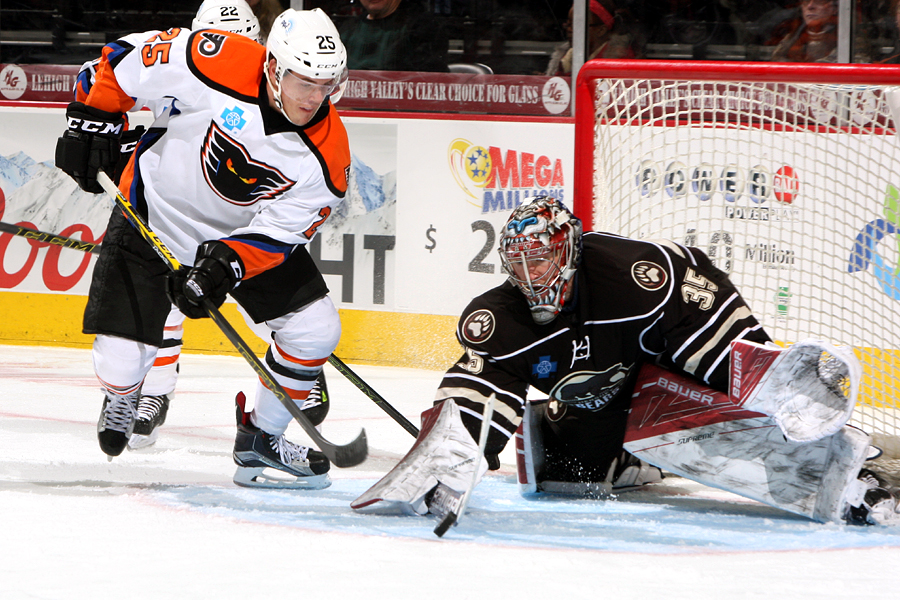 Lehigh Valley, PA – The Lehigh Valley Phantoms posted a season-high 45 shots on goal Friday evening and outshot visiting Hershey by a jaw-dropping 27-1 margin in the third period but the Bears were able to hang on for a 4-3 win in front of 8,793 fans at PPL Center. Hershey’s victory snapped Lehigh Valley’s three-game winning streak in the rivalry series. Still, the Phantoms are 5-3 overall against their Pennsylvania foes. 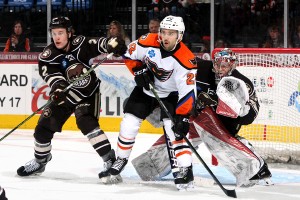 The 27 shots are now the most accrued by any AHL team in a single period this season and are the most tallied by any AHL squad in a single frame since the Adirondack Phantoms notched 29 shots in a period on February 25, 2012.

Nick Cousins (10th goal), Chris Conner (6th) and Colin McDonald (3rd) all scored for Lehigh Valley while Cole Bardreau (2 assists) registered the first multi-point game of his professional career. Recently named to the 2016 AHL All-Star Classic, Cousins became the third Phantoms player this season to reach the double-digit goal mark as he improved his team-leading point total to 32 on the year. Meanwhile, first-year forward Danick Martel and second-year winger Taylor Leier each collected an assist in the game as they became the third and fourth Lehigh Valley skaters this year to reach the 20-point plateau.

The tightly-contested affair featured one of the more raucous crowds of the season as the Phantoms skated in front of their ninth standing room-only sellout this season and fourth consecutive capacity crowd.

Friday’s game also featured the team’s third t-shirt giveaway of the 2015-2016 season as the first 8,500 fans in attendance received a free shirt with the Phantoms logo constructed with the names of each member of the Phantoms organization. 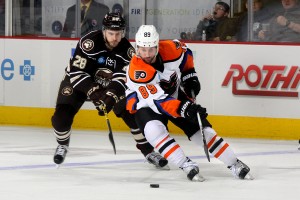 All four of Hershey’s goals Friday evening came at even strength as Lehigh Valley held the opposition’s power play off the board for the 10th time over the last 11 games. After a 1-for-1 performance Friday, the Phantoms have now successfully killed 34 of the team’s last 36 (94.4 percent) man-down situations.

Even though the first period didn’t include any scoring, it featured plenty of scintillating end-to-end action. Hershey came with the early push but LaBarbera was sharp from the opening faceoff denying each of the Bears’ 10 shots in the first frame, including an opportunity in the game’s opening minute that ricocheted over the top of the net.

Then it was the Phantoms turn to apply the pressure. First, the forward trio of McDonald, Cousins and Taylor Leier sustained a relentless forecheck that kept the puck hemmed in Hershey’s zone for nearly a full minute. Then, Sam Gagner darted free on a partial right wing breakaway only to see his sizzling slap shot fended off by the arm of Peters. Finally, a last-minute surge led to a sharp angle opportunity for Kevin Goumas at the goal line that a sprawling Peters was somehow able to smother. In all, Lehigh Valley generated eight shots on goal in the first period.

The scoreless deadlock was broken early in the middle stanza when, less than two minutes into the second period, Travis Boyd kicked a loose puck atop the Phantoms goal crease to Bourque who promptly snapped in his team-leading 17th goal of the season. Connor Carrick collected the secondary assist on the even-strength strike netted 1:55 into the middle frame.

The Bears doubled their advantage less than six minutes later when a Carter Camper offering from the left wing produced a rebound on the right side that was punched in by Lewington for his second goal of the year. Camper and Paul Carey assisted on the five-on-five conversion tallied 7:27 into the second period.

The Phantoms didn’t back down though and netted the two equalizing tallies just 52 seconds apart. First, Mark Alt fed a perfect cross-ice pass to Cousins on the door step who made no mistake in redirecting in his 10th goal of the season. Martel earned the secondary assist on the even-strength tally scored 9:26 into the period as Cousins became the third Lehigh Valley skater this season to reach the double-digit goal mark.

Then, less than a minute later, the Phantoms leveled the contest when Bardreau sent a pass from behind the Bears net to the top of the blue paint where Conner quickly tapped in his sixth goal of the year. Bardreau and Gagner assisted on the five-on-five marker netted 10:18 into the middle stanza. The goal was Conner’s first conversion and third point in three meetings against his former team. The 32-year-old winger spent last season with the Bears where he registered 19 goals and 52 points in 61 games.

Hershey re-established the lead just over two minutes later when O’Brien was able to collect his second goal of the season with a deft redirection atop the Phantoms goal crease. Carrick and Garrett Mitchell assisted on the go-ahead marker scored 12:12 into the period, which capped a five-goal outburst between the in-state rivals in the middle period.

Then came a third period in which the word domination would be an understatement for the way the Phantoms controlled the game’s final frame. Rolling all four forward lines and all seven defensemen at its disposal, Lehigh Valley came with wave after wave of pressure relentless searching for the tying marker.

In a cruel twist of fate, the Bears recorded just one shot on goal in the final frame, which found the back of the net as Gazley scored 14:23 into the period from Lewington and Chris Brown.

But that didn’t slow the Phantoms pursuit one bit as Lehigh Valley climbed back to within one less than three minutes later when McDonald poured home his third goal of the year. Leier and Bardreau assisted on the five-on-five tally scored exactly 17 minutes into the third period.

The Phantoms are back in action at PPL Center on Saturday when they welcome the Hartford Wolf Pack, the AHL affiliate of the New York Rangers, to downtown Allentown for the first time this season. Saturday’s game is Girl Scout Night and a limited number of tickets remain for the highly-anticipated contest. Be sure to secure yours now at pplcenter.com, by calling 610-347-TIXX [8499] or in-person at the Mealey’s Furniture Box Office at PPL Center [701 Hamilton Street].