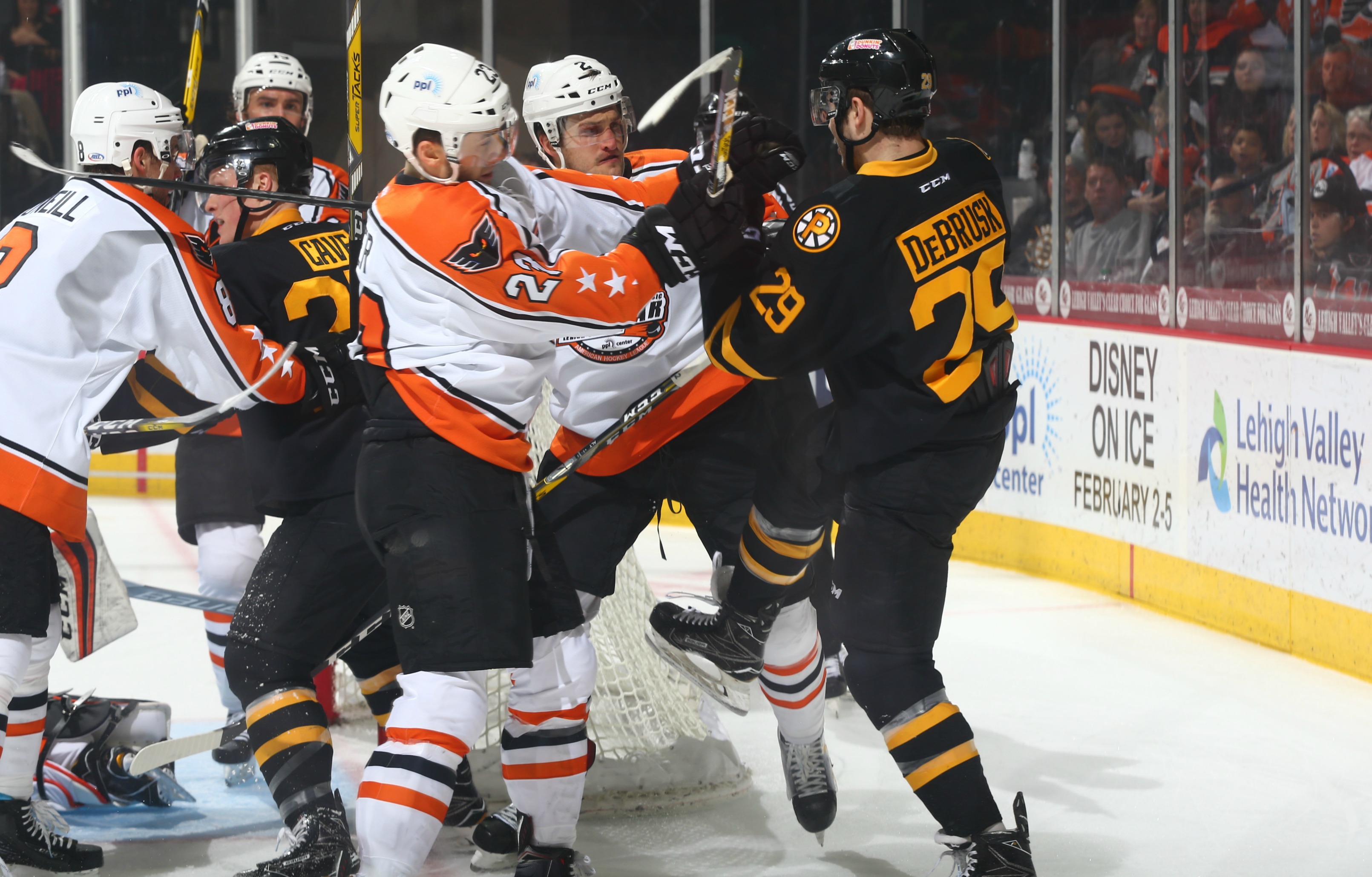 Lehigh Valley, Pa. – Captain Colin McDonald scored his 15th goal of the season and the Lehigh Valley Phantoms skated in front of their third straight standing room-only crowd Saturday evening but it was the visiting Providence Bruins who emerged victorious in a 9-1 decision at PPL Center. The setback was just Lehigh Valley’s fifth over the club’s last 16 games as the Phantoms moved to 26-11-2 overall this season. Lehigh Valley remains in sole possession of second place in the tightly-contested Atlantic Division. 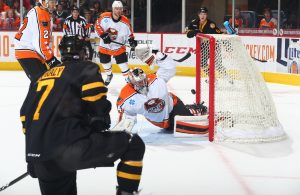 With Saturday evening’s conversion, McDonald eclipsed the 14 goals he posted in 51 games with Lehigh Valley a season ago and secured his highest goal-scoring campaign since the winger compiled 42 goals during the 2010-11 season with the Oklahoma City Barons. All-Star forward Taylor Leier collected the primary assist on McDonald’s marker as Leier collected his sixth point over the team’s last six games. Meanwhile, Scott Laughton garnered the secondary assist and in so doing, notched a point for the sixth time in his last seven games.

Saturday’s contest came in front of a crowd of 8,726 raucous fans – the third-largest crowd to enjoy a Phantoms games at PPL Center this season. Saturday’s outing marked the third straight standing room-only sellout for Lehigh Valley and the club’s seventh capacity crowd this season.

The Phantoms are now 3-1 against Providence this season. 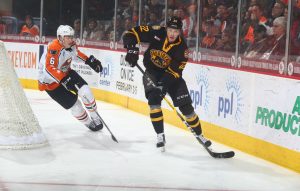 Providence opened the scoring less than three minutes into the contest when a pass from behind the Lehigh Valley net deflected off a Phantoms defender in front before landing on the stick of Colby Cave in the slot who promptly snapped home his ninth goal of the season. Jake DeBrusk and Casto assisted on the even-strength netted 2:59 into the first period, which marked just the 13th time in 39 games this season that Lehigh Valley has surrendered the game’s opening goal.

The Bruins then doubled their lead with just over three minutes remaining in the opening stanza when Danton Heinen fed a cross-ice pass to Sean Kuraly who one-timed in his eighth goal of the year. Tyler Randell garnered the secondary assist on the five-on-five tally scored 16:40 into the first period. 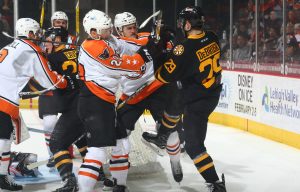 Providence was then able to swell its edge to a 5-0 advantage thanks to three goals in a span of just over six minutes in the second period.

First, Cehlarik landed his first conversion of the night and 16th of the season 2:05 into the middle stanza with assists from Simpson and Szwarz. Then, less than five minutes later, Cehlarik scored again with assists once again from Simpson and Szwarz. Cehlarik’s second goal of the game and 17th conversion this year marked the end of the evening for Phantoms’ goaltender Alex Lyon who finished with 12 saves on 16 Bruins shots. With that, Mark Dekanich stepped between the Lehigh Valley pipes for the first time this year and for the first time in an AHL contest since he patrolled the crease for the Hershey Bears on December 27, 2015.

The Bruins capped their three-goal surge just over a minute later when Chris Porter spun a shot from the high slot that deflected off a Phantoms stick before knuckling into the back of the Lehigh Valley cage for his first goal of the season. Casto collected the only assist on the even-strength strike scored 8:15 into the second period.

Providence completed its impressive middle frame with a pair of goals just over two minutes apart late in the period. First, DeBrusk deposited his 11th goal of the year 15:57 into the second frame from Peter Mueller and Alex Grant before Ben Marshall launched a slap shot from the high slot that found daylight past Dekanich for his second tally of the year. Noel Acciari and Grant assisted on Marshall’s even-strength strike converted 17:59 into the middle stanza.

The Bruins added another two goals in the third period (Szwarz, 4:09 and Simpson, 7:30) before McDonald was able to spoil Subban’s shutout bid an even-strength strike 18:41 into the final frame. The captain’s conversion extended McDonald’s scoring streak to three consecutive games as he’s compiled five points over his last three outings.

Dekanich finished the evening with 26 saves on 31 Providence shots.

The Phantoms cap this weekend’s action on Sunday when they invade the Giant Center in Hershey for a 5:00 p.m. showdown with the Bears.

Lehigh Valley is then back in action at PPL Center on Wednesday, January 25 for their final home game before the All-Star break when the Phantoms host the Binghamton Senators. Tickets for next Wednesday’s contest are available now by clicking HERE.