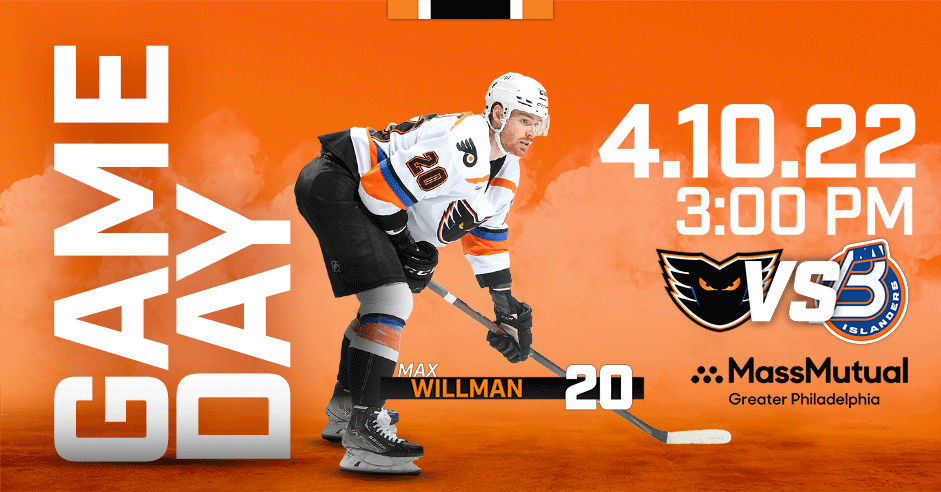 It’s a Phantoms GAMEDAY presented by MassMutual with another Sunday afternoon engagement at the Bridgeport Islanders. The Phantoms played in Bridgeport last Sunday as well, coming away with a 4-3 win on Isaac Ratcliffe’s power-play goal with 4:00 left.
The Phantoms have won four of their last five to climb back into the thick of the very competitive Calader Cup Playoff race for the last available spots.
Lehigh Valley (26-28-11) is playing game 66 of the season and there are 11 remaining including today.

LAST TIME
Wade Allison scored from his knees just before the puck rolled out of his reach to break a 1-1 tie late in the second period and the Phantoms improved to 5-0-0 against Hershey at PPL Center in a 4-1 win. Adam Clendening’s stretch pass connected with Alison but he was knocked down and tripped up. He still managed a long backhand swat at the puck that bounced through five-hole on Zach Fucale. Cal O’Reilly had a goal and an assist and Isaac Ratcliffe and Tanner Laczynski also scored for the Phantoms while Felix Sandstrom was very strong with a 31-save effort.

WELCOME BACK…AGAIN!
Hayden Hodgson played on Saturday night for the Philadelphia Flyers and scored his second NHL goal of the season. He has since been returned to the Phantoms and is eligible for today’s game against Bridgeport. The hard-shooting right wing has gone from preseason AHL tryout all the way to NHL contract in the same season. On March 24, Hodgson made his NHL debut and scored a goal with an assist in Philadelphia’s 4-2 victory at St. Louis. The Windsor, Ontario native played in five games with Philadelphia on his recall. Hodgson is tied with Cal O’Reilly for the team-lead in goals with 19 after scoring in his first game back with the Phantoms on Wednesday at Wilkes-Barre/Scranton.

BRIDGEPORT ISLANDERS
The Phantoms travel to Bridgeport, Connecticut for a second consecutive Sunday matinee. Bridgeport (28-28-11) has one win in its last five (1-3-1) since seven-game point streak (6-0-1) briefly pulled them into the Atlantic’s last playoff spot. The Islanders have split a pair of games with Providence this weekend including a 3-2 win on Friday in Bridgepot followed by a 6-2 loss at Providence on Saturday in the rematch. AHL veteran Chris Terry leads the B-Isles with 28-26-54. Terry is on a six-game goal streak with seven goals in the stretch. Phantoms’ alum Andy Andreoff is third on the team with 16-23-39 and popular former Phantom Cole Bardreau has scored 13-11-24 including three shorthanded goals. The Phantoms are 2-2-0 against Bridgeport after this past Sunday’s gutsy 4-3 win. NHL veteran Cory Schneider is 2-0-0, 1.00, .960 against the Phantoms.
Lehigh Valley is 4/8 on the power play against the Islanders including three man-advantage markers last Sunday. Head coach Brent Thompson is the father of Buffalo Sabres’ first-rounder Tage Thompson and New Jersey Devils’ prospect Tyce Thompson.

PHANTASTIC!
– Wade Allison has nine goals in just 17 games this season. The energetic  and popular forward has missed significant time with three different injuries this season. Allison has five goals in his last seven full games.
– Five Phantoms players have made their NHL debuts this season: Max Willman, Felix Sandstrom, Linus Sandin, Isaac Ratcliffe, Hayden Hodgson
– Adam Clendening is 4th among AHL defenseman in assists with 32. He is ninth in total points (37)
– Felix Sandstrom in April is 3-1-0, 1.77, .944 with seven goals allowed on 124 shots.
– The Phantoms power play is 9/33 (27.2%) in the last 9 games.
– Isaac Ratcliffe recorded his first multi-goal game last Sunday at Bridgeport. That included the game-winner with just 4:00 left breaking a 3-3 tie.
– Lehigh Valley’s three power-play goals in Sunday’s win at Bridgeport was their most in a game this season.
– Cal O’Reilly has 19 goals this season to establish a new personal high. The 35-year-old captain of the Phantoms had 18 goals in a season 15 years ago in the 2006-07 season when he was a 20-year-old rookie with the Milwaukee Admirals.
– The Phantoms have played 65 games and have 11 remaining in the 2021-22 regular season.