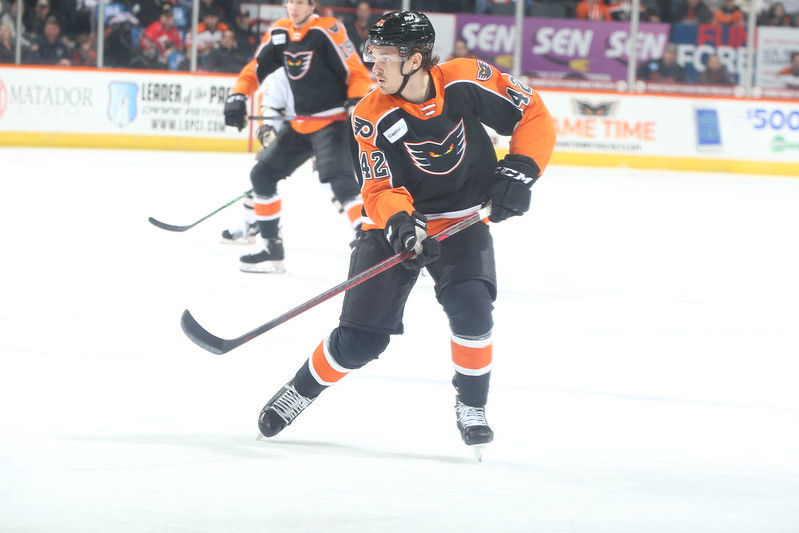 Hodgson played for the Flyers in Friday night’s game against the Anaheim Ducks and registered his second assist of the season while playing in his sixth NHL game.

Hodgson initially signed an NHL contract on March 23, 2022 and made his NHL debut on March 24 scoring a goal and recording an assist in a 4-2 win at the St. Louis Blues. Hodgson has played in six games with the Flyers with one goal and two assists.

Hodgson, 26, is tied with Cal O’Reilly for the team lead on the Phantoms with 19 goals this season. The Windsor, Ont. native also has 12 assists for 31 points in 46 games. Hodgson played two games with the Phantoms on Wednesday and Friday, scoring a goal and recording one assist, in his most recent stint with the team.

In his first games in the AHL in four years, Hodgson continued to thrive and catch the attention of head coach Ian Laperriere eventually earning an AHL contract extension for two years, and then an NHL contract, followed by an NHL recall and his debut with the Flyers.

The Sarnia Sting (OHL) product has also played in 98 career games in the ECHL scoring 22-22-44. Last year, he split his time between the Wheeling Nailers and Utah Grizzlies. Two years ago, he scored 12-8-20 with the Reading Royals in 36 games. Hodgson had not played in the AHL since his rookie professional season in 2017-18 when he suited up in 41 games with the Cleveland Monsters scoring 3-3-6.

The Lehigh Valley Phantoms return to action on Sunday afternoon at the Bridgeport Islanders with a 3 p.m. clash.

The Phantoms next play at PPL Center on Wednesday, April 13 against the Hershey Bears. The homestand continues on Friday, April 15 and Saturday, April 16 against the Bridgeport Islanders and Providence Bruins. The April 16 game is Pride Night presented by the Bradbury-Sullivan LGBT Community Center in Allentown.