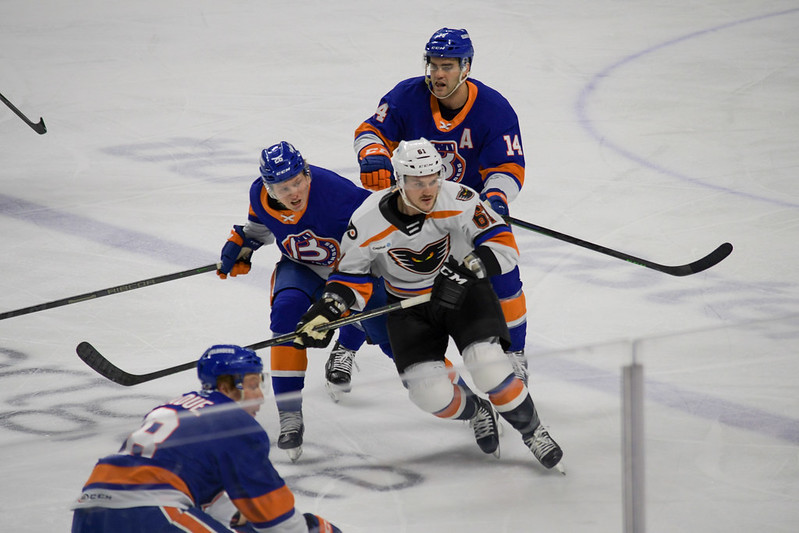 Bridgeport, CT – The Lehigh Valley Phantoms couldn’t get the bounces despite a 44-shot attack that also included at least four additional shots off the posts. The Bridgeport Islanders hung on a for a 4-2 win on Sunday afternoon at Total Mortgage Arena.

In addition to the 44 shots on goal were glorious chances for the Phantoms that found iron. Max Willman in the first period, zipping up the right wing, cranked a shot off the inside of the far post past the blocker of Schneider but the rebound stayed out. Adam Clendening carried from the blueline to the high slot and fired a shot off the crossbar past the glove of Schneider. And, most motably, Wade Allison had a great chance on the backdoor on the right of the cage on a set up cross ice by Adam Johnson but missed the mostly open net and only struck metal on the short side.

Former Phantom Andy Andreoff (17th) scored first for the home team with the rebound of a Robin Salo point shot. Andreoff’s quick put-back beat Felix Sandstrom to give the Islanders a 1-0 at the first intermission.

Late in the sceond period, shortly after Allison’s post-shot, the Islanders would double their lead on Austin Czarnik’s shovel from the high-slot on a pass from Parker Wotherspoon. The push towards the net appeared to deflect off the stick of a Phantoms’ defenseman and over the left-pad of Sandstrom for the unlucky break and a 2-0 lead for the home team.

The Phantoms took a 14-2 shots advantage within the first 13 minutes of the third period but Schneider kept looking like the former NHL All-Star and AHL Baz Bastien Award winner (Goalie of the Year) that he is with a number of terrific saves.

He denied Adam Johnson on a third-period shorthanded breakaway with a sparking right pad denial. And he robbed Cal O’Reilly at the net front flashing the left pad barely in time to just get a piece of the push towards the right post on yet another great Phantoms’ opportunity that wouldn’t go.

The Phantoms finally broke through on a point-shot that was deflected over the shoulder of Schneider by Adam Johnson who pulled the Phantoms to within a goal with under seven minutes left.

With 2:58 remaining, the Phantoms had a power play opportunity on a Delay of Game call. But Kyle MacLean outworked two Phantoms players to win the puck behind the Phantoms’ goal. He carried out in front on his own and induced Sandstrom to bite before tossing the impressive goal over the right pad for the shortie that gave Bridgeport a 3-1 lead with 1:42 remaining.

Wilson got one of them back on a hard net-front scramble with 37 second to go but Simon Holmstrom would finish the game with his empty-netter from the blueline with 3.3 seconds remaining for the 4-2 final.

The Phantoms return to action Monday night at the Providence Bruins.

The Lehigh Valley Phantoms have a three-game homestand upcoming with PPL Center engagements on Wednesday, Friday and Saturday hosting the Hershey Bears, Bridgeport Islanders and Providence Bruins. Saturday night’s game is Pride Night in partnership with our friends at the Bradbury-Sullivan LGBT Community Center in Allentown.