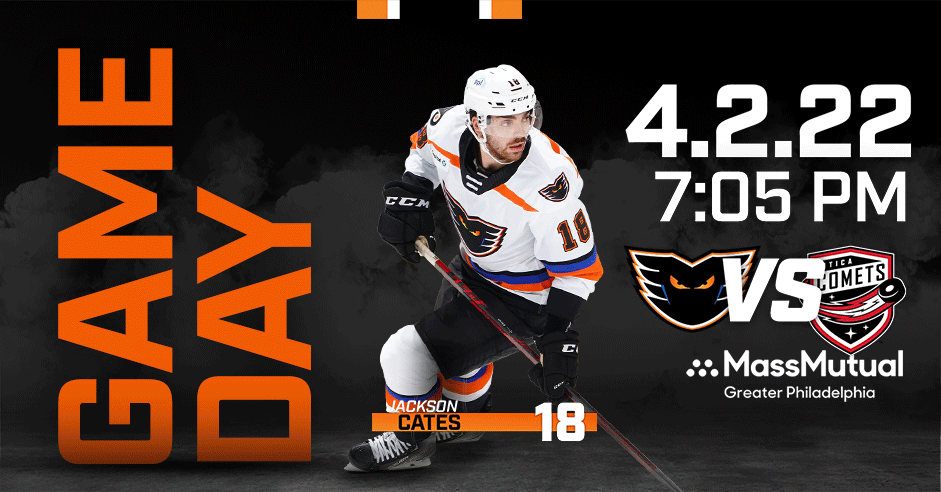 LAST TIME
Wade Allison broke a 2-2 tie with under 15 minutes left in the third period after Adam Johnson rushed up to win an icing race as the Phantoms defeated the Wilkes-Barre/Scranton Penguins 4-2 on Friday night at PPL Center. Ryan MacKinnon scored his first career goal in the AHL and Tanner Laczynski (5th) had a steal at the Phantoms blue-line and raced away from the pack for a breakaway beatuy against his former Ohio State teammate, Tommy Nappier. Max Willman sealed the win with a long empty-netter just before the clock hit zero. Felix Sandstrom was very strong with 29 saves on 31 shots.

UTICA COMETS
The Utica Comets (39-14-7) are the top team in the Eastern Conference after deafeating Syracuse last night 5-3.
The Comets are in their first season as an affiliate of the New Jersey Devils after seven years with the Vancouver Canucks. Utica is the top scoring team in the conference at 3.54 goals per game and its 22.9% conversaion rate on the power play is second-best in the conference (behind Rochester). The Comets are also second-best in defense in the Eastern Conference allowing a palty 2.72 goals per game. Hard-shooting first-rounder Alexander Holtz is second among AHL rookies with 22 goals. Former Binghamton Devils forward Fabian Zetterlund leads the team in scoring with 24-28-52. The Phantoms are 1-1-1 against Utica including a New Year’s Eve rally in central NY when Lehigh Valley posted a 6-5 overtime win after trailing 4-0 and 5-1.
Former Flyers captain Kevin Dineen is the head coach of the Comets.

PHANTASTIC!
– Five Phantoms players have made their NHL debuts this season: Max Willman, Felix Sandstrom, Linus Sandin, Isaac Ratcliffe, Hayden Hodgson
– Ryan MacKinnon had never played forward until this season. After being pressed into emergency duty up front, MacKinnon has maintained a place in the lineup as a right wing. The Summerside, Prince Edward Island native has played in the ECHL with Worcester for most of his career. Friday night vs. Wilkes-Barre/Scranton he scored his first career AHL goal.
– Wade Allison has scored 5-5-10 in seven gams since returning to the lineup March 11.
– Cal O’Reilly has 18 goals this season to equal a personal high. The 35-year-old captain of the Phantoms also had 18 goals in a season 15 years ago in the 2006-07 season when he was a 20-year-old rookie with the Milwaukee Admirals. Cal has five goals in his last five games including a pair of two-goal games.
– The Phantoms have played 60 games and have 16 remaining in the 2021-22 regular season.