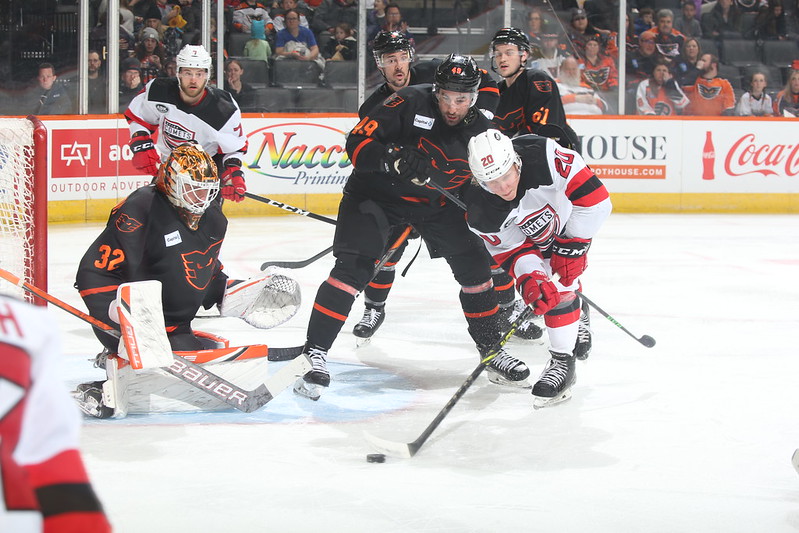 Lehigh Valley, PA – Trailing 2-0 and being largely outplayed for the first period and into the second, the Lehigh Valley Phantoms found their stride to post an impressive 3-2 comeback victory over the conference-leading Utica Comets on Saturday night at PPL Center.

A raucous crowd on Hispanic Heritage weekend roared with their approval of the team’s resilience as the Phantoms impressively swept their pair of home games on their Hockey Fiesta.

Garrett Wilson (14th, 15th) scored the winning goal in the third period just 57 seconds after Ryan MacKinnon (2nd) deflected an Adam Clendening point-shot to tie the game. Felix Sandstrom was magnificant in a 37-save masterpiece that included a sparkling left-pad denial of first-rounder Alex Holtz on the backdoor with just 1:10 left. Sandstrom’s consecutive stops on the sequence helped secure the heart-stopping win.

The impressive comeback was somewhat reminscent of the team’s incredible rally against the very same Utica team in central New York on New Year’s Eve when the Phantoms trailed 4-0 and 5-1 before improbably storming back to win in overtime 6-5.

It certainly didn’t appear to be the best night for the Phantoms to start. Utica enjoyed a 17-4 shots advantage in the first period and Lehigh Valley wasn’t able to muster much possession or offensive attack. But Sandstrom held tough and only gave up a power-play rebound tally to newcomer Brian Halonen at the net front. The first career goal for the newcomer from Michigan Tech gave the Comets a 1-0 lead at the first intermission.

The Comets struck on the power play again early in the second period. This time it was a monster one-timer from the left dot for New Jersey prospect Tyce Thompson that put the Comets up 2-0.

Utica kept up the pressure and was outshooting the Phantoms 27-12 near the midway point of the game.

But the Phantoms were starting to gain some opportunities and, thanks to Sandstrom, were still in the game albeit behind on the scoreboard. A tripping penalty put the Phantoms on the power play late in the second period which kicked the comeback effort into a higher gear.

Garrett Wilson, from the right of the cage, put a shot off the paddle of goalie Mareks Mitens that caused problems. The deflection went airborne and over his shoulder and appeared to be on its way to falling into the net. Mitens attempted to swat it away but inadvertently batted the puck directly in behind him as Wilson received his third power-play conversion in his last four games while breaking through to get the Phantoms on the board.

Lehigh Valley then had Utica clinging to its one goal lead in the third period. The Comets, who dominated so convincingly earlier, were barely hanging on. 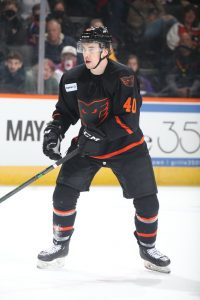 With 12:17 left in the third period, Adam Clendening rifled a shot from left point that defensman-turned-forward Ryan MacKinnon got a piece of . The deflection past the shoulder of Mitens tied the game at 2-2. MacKinnon had just scored his first career AHL goal on Friday night and now finds himself with a two-game goal streak. The Summerside, Prince Edward Island native had always been a defenseman for his whole career but head coach Ian Laperriere has found a new talent with him as a right wing after MacKinnon had originally been pressed into playing forward in January only due to roster depletion.

Shortly after the next promo timeout, Cooper Zech kept in a Comets’ clearing try following a faceoff win. His shot handcuffed Mitens and provided Wilson at the net-front with a pair of chances. The first try was kicked out by the left pad but Wilson stayed with the play and successfully slid a backhander just beyond the reach of the left skate of Mitens a mere 57 seconds after MacKinnon had tied the score. Wilson’s go-ahead goal with 11:20 left would somehow hold up the rest of the way. But it took several strong stops from Sandstrom to get there. That included his amazing denial of Holtz with 1:10 left.

The Phantoms improved to 2-1-1 against the best team in the conference.

The Lehigh Valley Phantoms conclude their busy weekend with a Sunday afternoon matchup at the Bridgeport Islanders at 3:00 p.m.

The Phantoms return to PPL Center on Friday, April 8 hosting the rival Hershey Bears with fans also invited to participate in a Postgame Skate.