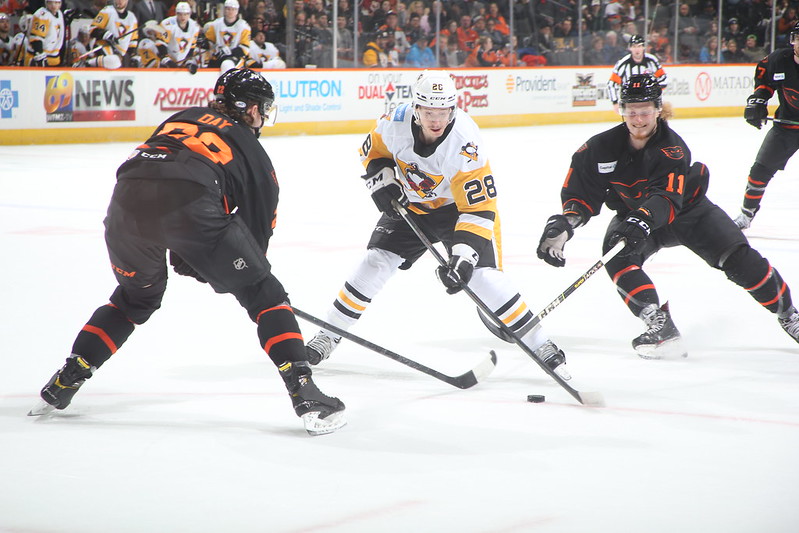 Lehigh Valley, PA – Wade Allison fired it from the left dot with under 15 minutes to break a 2-2 tie and push “Los Fantasmas” to a 4-2 victory at PPL Center to open Hockey Fiesta weekend with the team recognizing the region’s Hispanic Heritage.

Ryan MacKinnon (1st), Tanner Laczynski (5th) and Max Willman (10th) also scored for Lehigh Valley while Felix Sandstrom turned aside 29 out of 31 shots in the win. 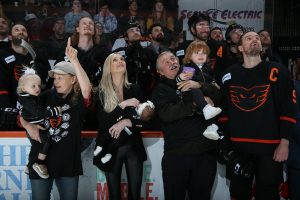 Phantoms’ captain Cal O’Reilly was honored before the game after having played in his 1,000th pro game last week. This was his first home game since his milestone achievement and he was presented with a plaque before the game and then surprised on the ice when  congratulations videos were played on the video-board from his brother Ryan O’Reilly of the St. Louis Blues as well as hockey icons Wayne Gretzky and Mike Modano.

Lehigh Valley (23-27-11) got off to a shaky start in the game as the Penguins enjoyed an 11-2 shots advantage and scored the first goal of the game barely more than three minutes in with Michael Chaput (9th) burying a backhander on a 2-on-1 with Felix Robert.

But the Phantoms pushed back. Ryan MacKinnon scored his first career AHL goal on a rebound off the shoulder of goalie Tommy Nappier. MacKinnon’s mid-air whack into the back of the net with 12:20 remaining in the first period had tied the game at 1-1. A career defenseman, MacKinnon was pressed into emergency duty as a forward on January 5 due to a depleted roster. He received another opportunity up front three weeks later and has impressed head coach Ian Laperriere to the extent that the Prince Edward Island native has continued to receive opportunities up front.

Max Willman almost scored a goal to give the Phantoms the lead as he drove to the net from the right wing and curled the puck around the goalie. But a Penguins’ defender pushed the puck off the pegs moments before the puck had crossed the line and the officials determined to deem the play no goal.

Wilkes-Barre/Scranton (29-27-8) re-took the lead in the opening minute of the second period with Kyle Olson (10th) slipping through to the low slot to receive a pass from behind the net by Drew O’Connor which he successfully shot past Sandstrom.

But Sandstrom was largely on top of his game and made a handful of impressive stops including a point-blank denial flashing the right pad and another save moving laterally to his left quickly for another quality stop.

The Phantoms took their first lead of the night just over five minutes into the second period on Allison’s rifled wrister from the left dot going high glove on Nappier. Adam Johnson made a smooth pass to Allison to et up the scoring try and Brennan Menell received a secondary assist on the play in his first career game at PPL Center. But it was Allison’s impressive shooting ability on the game-winner that was the attention grabber.

Allison has played only 14 games in an injury-plagued season but has been finding his stride with his continued injury-free stretch. He returned to the lineup on March 1 following a knee injury in January in is one game in the NHL this year. Since then, the hard-shooting Allison has played in seven games scoring five goals with with five assists.

The Phantoms killed Wilkes-Barre/Scranton’s late-game push with the goalie pulled and then Max Willman offered a length of the ice shot blasted all the way down to the empty-net just before the clock read zero.

Lehigh Valley improved to 5-4-1 against the Penguins this season with two games remaining in the season series.