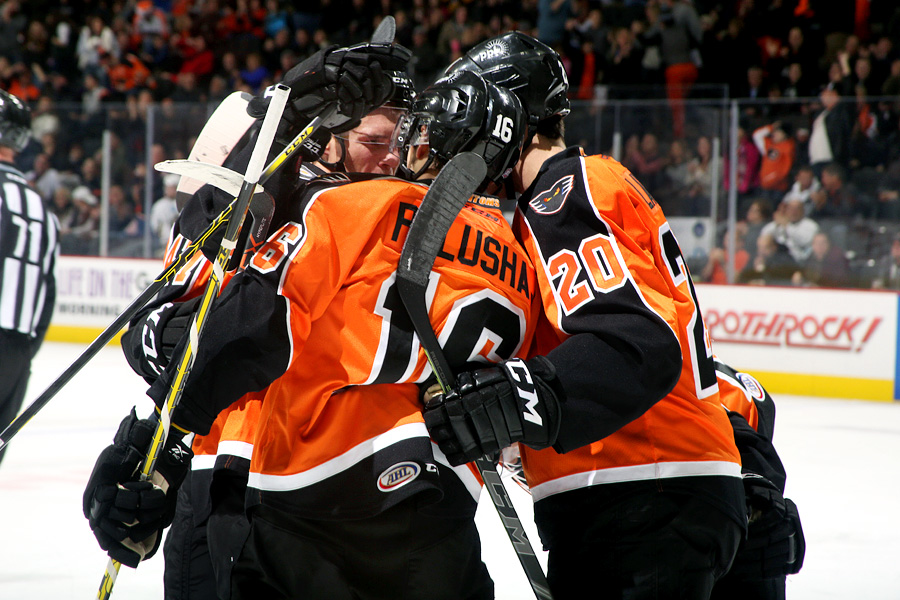 Lehigh Valley, PA – The Lehigh Valley Phantoms are developing a knack for comebacks against one of their biggest rivals.

Just nine days after erasing a two-goal, third-period deficit in a 3-2 overtime triumph over the Hershey Bears last Wednesday, the Phantoms turned an early 3-1 deficit to their rivals on Friday into a 6-4 regulation victory on the strength of five consecutive goals in front of 8,111 charged fans at PPL Center. With the win, Lehigh Valley improved to 14-14-1-0 on the year and is now 4-2 in six head-to-head meetings with Hershey.

Friday’s contest, which featured a Youth Winter Hat Giveaway for the first 2,500 kids 14 and under presented by PPL Corporation, capped a season-high five-game home stand in which the Phantoms earned three wins in five games at PPL Center.

Anthony Stolarz, making his seventh start over the team’s last eight games, earned the victory between the pipes as he denied 21 of Hershey’s 25 total shots. With the win, the second-year netminder improved to 12-6-1 on the year.

The Phantoms opened the scoring less than four minutes into the rivalry contest when a clean faceoff win in the offensive zone by Cousins steered a puck to the left point that was promptly blasted in by Morin for his second goal of the season and first inside PPL Center. The five-on-five conversion came 3:42 into the tilt and marked the 13th time this season that Lehigh Valley has grabbed the game’s opening goal. The Phantoms are now 10-3 this season when scoring first.

Hershey leveled the contest just over two minutes later when Carter Camper’s right wing offering was redirected atop the goal crease by Paul Carey for his 10th goal of the year. Aaron Ness earned the secondary assist on the even-strength strike notched 5:44 into the opening frame.

The Bears then grabbed their first lead of the night just past the midway point of the first period when, while on the power play, Camper netted his third goal of the season. Carey and Liam O’Brien assisted on the man-advantage marker scored 10:29 into the opening stanza.

Hershey doubled its lead just over a minute later when a stretch pass through neutral ice connected with a streaking Chris Bourque who collected the puck in stride along the right wing before sending home his 10th goal of the year. Chandler Stephenson and Mike Moore assisted on the five-on-five conversion buried 11:54 into the first period.

The Phantoms weren’t about to back down though as Lehigh Valley trimmed Hershey’s lead down to just a single goal before the first intermission with a power play goal of its own when MacDonald’s blast from the right point was altered by Leier atop the goal crease for Leier’s eighth goal of the season. Straka garnered the second assist on the man-advantage marker scored 16:48 into the opening period.

It didn’t take Lehigh Valley long to level the contest in the second period. Less than six minutes into the middle stanza, and less than a minute after Hershey’s Liam O’Brien was assessed a match penalty for a check to the head of Alt, the Phantoms tied the game 3-3 when Cousins snapped home his eighth goal of the season with a sizzling wrist shot from the right wing. MacDonald and Straka collected assists on the power play conversion buried 5:58 into the second period.

Lehigh Valley then recaptured the lead less than four minutes later when, after a barrage of power play scoring chances, the Phantoms landed their third straight man-advantage marker when a brilliant cross-ice pass by Palushaj connected with Lamarche on the right wing who made no mistake in driving home his first goal of the season and first career AHL marker. Cousins garnered the secondary assist on the power play goal netted 9:42 into the middle stanza.

The Phantoms didn’t take their foot off the gas and put the game out of reach with a pair of third period tallies. First, Alt landed his second goal of the year with a right point slapper 8:37 into the final frame. Then, with just under five minutes left in regulation, Bardreau redirected MacDonald’s left point drive for his first goal of the season. Morin and Palushaj assisted on Alt’s conversion while MacDonald and Lamarche grabbed helpers on Bardreau’s tally.

Hershey made one final dent on the score sheet with just nine seconds remaining in the game when Travis Boyd connected on his fourth goal of the year.

The Phantoms play their final game before the AHL’s holiday break on Saturday when they travel up to Binghamton for a 7:05 p.m. clash with the Senators. Catch all the action on FOX 1470-AM, online at www.fox1470.com or via the iHeartRadio app. Coverage begins with “Countdown to Faceoff” at 6:20 p.m.

The Phantoms then return to PPL Center on Saturday, December 26 when the Bridgeport Sound Tigers come to town in a game presented by Service Electric. Celebrate the rich tradition of Phantoms hockey with the team’s second “20 Years of Phantoms” nights, which includes the second of four commemorative poster giveaways free to the first 3,000 fans in attendance. Tickets for Saturday’s game are currently available by logging on to pplcenter.com, by calling 610-347-TIXX [8499] or by visiting the Mealey’s Furniture Box Office at PPL Center [701 Hamilton Street].