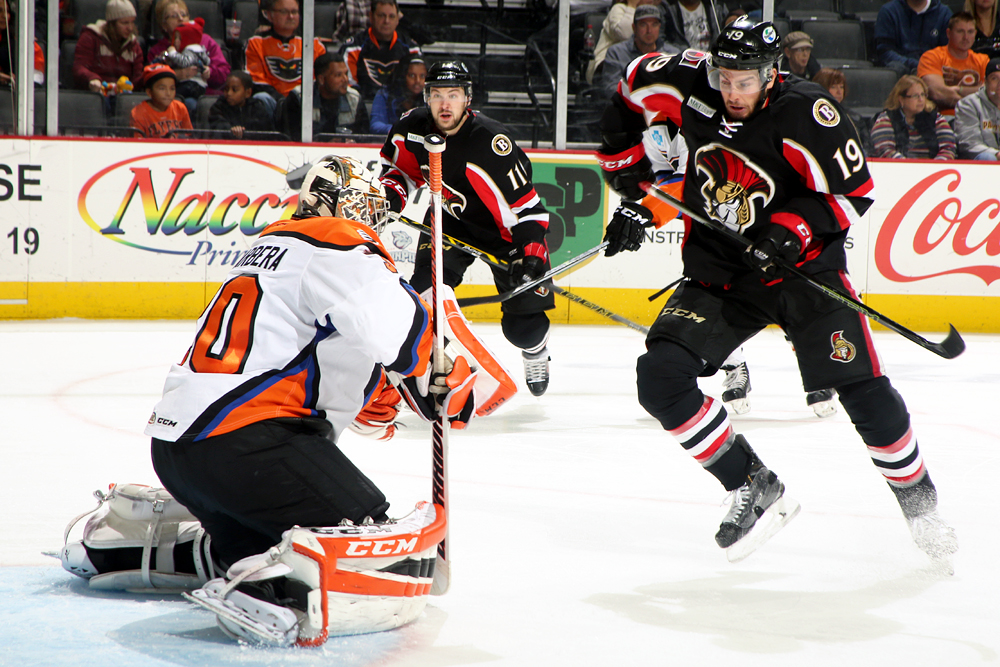 Jason LaBarbera Spectacular in 30-Save Performance in Goalie-Duel

Binghamton, NY – The offense that seemed to come so easily to the Phantoms on Friday night was unable to solve Binghamton rookie netminder Matt O’Connor on Saturday as Lehigh Valley dropped a 2-1 decision to the host Senators in the last game before the holiday break for both teams. Nick Paul’s first career pro goal set up by a lucky bounce off the back of someone’s leg broke a 1-1 tie with 2:20 remaining to propel the B-Sens to the win.

It was a shot/pass from the left point by Mark Fraser off a Binghamton face-off win that appeared to hit the back of somebody’s leg in a bit of a scrum still in the face-off circle which somehow took a perfect carom right across to a wide-open Nick Paul to fire in the game-winner.

For the Phantoms offensively it was mostly the same lineup that had just put in six goals against the Hershey Bears one night earlier but that same production was harder to come by against a determined Binghamton squad playing one of their best games of the season in their efforts to climb up the Eastern Conference standings.

Colin McDonald swatted at a rebound in a mid-air in the slot for his first goal in a Phantoms sweater evening the score at 1-1 late in the third period with assists by Taylor Leier and Kevin Goumas.

Veteran goalie Jason LaBarbera was spectacular in net for the Phantoms in a scintillating 30-save performance in his best game of the year. Without LaBarbera’s big stops in a second-period onslaught of shots and first-period 5-on-3 power play the Phantoms could have been in bigger trouble.

The 5-on-3 kill in the first was a thing of beauty with the Phantoms battling hard in their own end without two of their top defenders. Davis Drewiske and Andrew MacDonald were both sitting in the box while Samuel Morin, Mark Alt, Robert Hagg, Joe Rehkamp and Kevin Goumas all came up with big plays at times in front of Jason LaBarbera who began his stretch of dazzling stops in the crucial opening moments of the contest.

In the second period, Ryan Dzingel burned up the left wing and elevated a sharp-angle goal over the right shoulder of LaBarbera to give Binghamton the 1-0 lead past the midway point of the game. That culminated a series of offensive pushes for the Senators that had LaBarbera dodging and moving left and right turning away everything thrown his way. But with that kind of pressure for a long enough time, eventually the Senators were able to break the scoreless goaltenders’ duel.

Lehigh Valley was robbed by some spectacular saves from the Boston University rookie O’Connor. In the first period, Tyrell Goulbourne intercepted a pass in front of the Binghamton line and connected with a wide-open Kevin Goumas who was down in the low slot. Goumas moved to his left and had O’Connor leaning the wrong way but Goumas was unable to lift the puck from that side and the Binghamton goalie barely survived with his right-pad finding the puck.

In the third period, a cross-ice feed by Nick Cousins in the right corner was on the tape for Andrew MacDonald on the top of the left circle but O’Connor was able to barely recover and sprawl across for a diving save reaching up with the glove while almost completely down on his belly.

The Senators out shot Lehigh Valley 33-22. Both teams were 0-for-3 on the power play.

The Phantoms missed out on their opportunity to climb over the .500 mark falling to 14-15-1 at the 30-game mark of the regular season and entering the Holiday Break. Lehigh Valley has one home game left in 2015 before embarking on a five-game road-trip that will carry the team intothe New Year.

The Phantoms return to PPL Center on Saturday, December 26 when the Bridgeport Sound Tigers come to town in a game presented by Service Electric. Celebrate the rich tradition of Phantoms hockey with the team’s second “20 Years of Phantoms” nights, which includes the second of four commemorative poster giveaways free to the first 3,000 fans in attendance. Tickets for Saturday’s game are currently available by logging on to pplcenter.com, by calling 610-347-TIXX [8499] or by visiting the Mealey’s Furniture Box Office at PPL Center [701 Hamilton Street].

Saturday also marks the last home game of 2015. The Phantoms head out for a five-game road-trip after that beginning on Sunday, December 27th at Wilkes-Barre/Scranton and continuing with a rematch against the Binghamton Senators on Tuesday, December 29th.