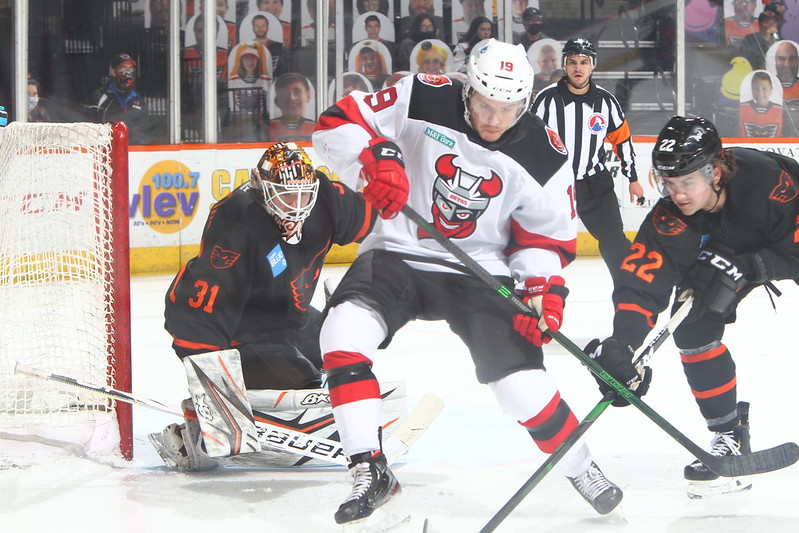 Lehigh Valley, PA – The Lehigh Valley Phantoms’ four-game point streak came to an end and the team took just its second regulation loss in the last 11 games in a 4-2 defeat to the Binghamton Devils on Saturday night at PPL Center. Isaac Ratcliffe (2nd) and Max Willman (8th) scored for the Phantoms, who took a 2-1 lead in the second, but a pair of goals for Binghamton’s Mason Jobst (3rd, 4th) pushed the Devils ahead again before A.J. Greer’s empty-netter sealed the victory.

It was the first regulation win in 11 tries for the Devils against the Phantoms in the rivalry series. Lehigh Valley is now 8-1-2 against Binghamton this season and its overall record moves to 15-5-4. 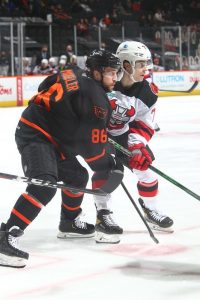 Brett Seney (4th) opened the scoring at 10:16 into the first period on a rebound of a Fabian Zetterlund shot who recorded his first of three assists on the game. Max Willman had the team’s best chance in the first period on a shorthanded breakaway see tup by a missed connection on a neutral-zone drop for the DEvils that was pounced on by Chris Mueller to send Willman speeding in for the chance. But Devils goalie Gilles Senn maneuvered to his right to nudge the shot away with the pad on a strong denial.

The Phantoms surged back in the second period shortly after Garrett Wilson got both sides ignited with a powerful blast of Nikita Ohkotiuk that drew the attention and ire of Ben Thomson and the rest of the Devils. Thomson and Wilson scrapped and received roughing minors.

Isaac Ratcliffe (2nd) sneaked his way to an open spot on the backdoor to receive a splendid cross-ice pass from Chris Mueller from way down in the corner. Zayde Wisdom won the puck on the right boards and got a poke forward to Mueller to keep the play going and receive a secondary assist on the play allowing the Phantoms to knot the game at 1-1 at 4:00 into the second period.

Cal O’Reilly found iron in the slot on a chance to take the lead. Later in the period, it was Willman again, this time cutting from left-to-right across the slot. He waited for a diving defenseman to no longer block his path and snapped on the go-ahead shot all while falling across and eventually sliding on his back all the way to the corner WHILE celebrating his impressive goal with 2:40 left in the period. Tyler Wotherspoon connected with Willman to spark the play and Logan Day also received an assist on the goal.

It only took the Devils 70 seconds to answer, however, to answer back with Mason Jobst on the back-door burying a nice feed from behind the goal-line by Zetterlund to forge a 2-2 deadlock after 40 minutes.

Ryan Fitzgerald almost gave the Phantoms the lead early in the third period. His sharp-angle chance found the crossbar and dinger away. Both goalies had to be at their strongest in the third as Zane McIntyre and Gilles Senn made some of their best saves of the night. McIntyre went down on his belly moving to his right and kicked up his right pad to somehow get the desperation save on Ben Thomson in tight. Senn was equal to the task with a number of impressive close-range stops.

Third-period penalties on the Phantoms proved costly as the Devils had consecutive power plays in the third culminating with Jobst’s goal in the slot on a one-timer from Zetterlund with 7:25 remaining. A.J. Greer (4th) landed the team’s empty-netter with 2:13 to go to complete the scoring.

The game was just the second regulation loss this season for Zane McIntyre (10-2-2) and his first since February 26. It was sweet revenge for Devils’ goalie Gilles Senn (3-8-2) who was playing for the first time since giving up five goals in one period against the Phantoms last Monday.

Just seven games remain in the 2021 regular season including only four games at home. Tickets for our remaining Phantoms contests at PPL Center are available HERE