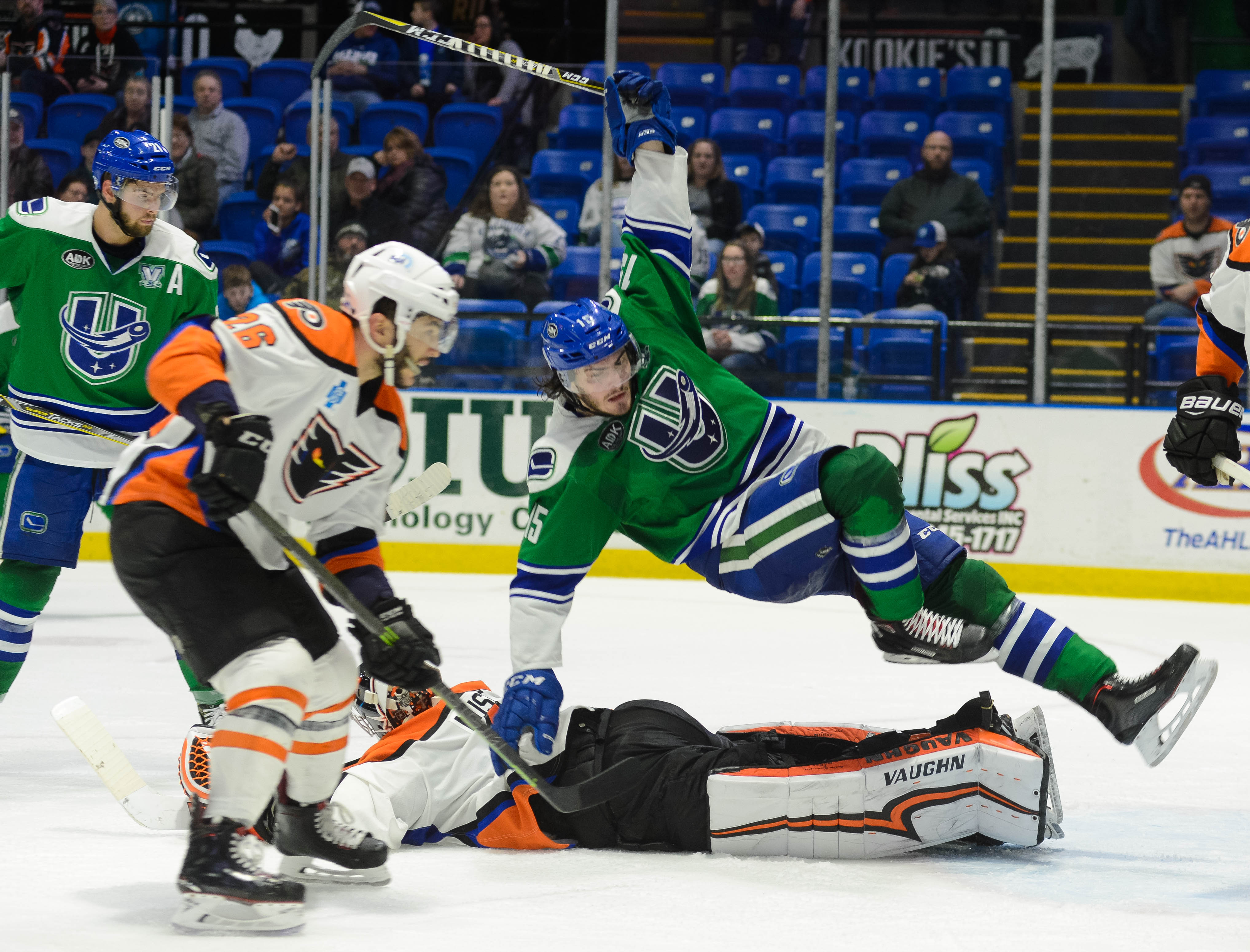 Utica, NY – Phil Varone registered his first career hat trick with 5:04 remaining in regulation while also breaking a late 4-4 deadlock to lead the Lehigh Valley Phantoms in a 6-4 win at the Utica Comets on Wednesday night. The Phantoms are unbeaten in regulation in their last eight games at 7-0-1 while becoming the first team in over a month to defeat Utica in regulation. The Comets had a 16-game point streak at 13-0-3 entering the evening.

The Phantoms also have standings points in 15 of the last 17 games at 13-2-2 while improving their overall mark to 34-14-7 for 75 points which is just two away from the league-high of 77 points held by the Toronto Marlies.

Varone is on a four-game goal streak with six goals in the stretch. He registered the second hat trick of the season for the Phantoms and the first since Danick Martel’s Opening Night hattie on October 7th against Hershey. It was also the tenth hat trick all-time for Lehigh Valley and the second in as many seasons at Utica coming almost exactly one year after the previous Phantoms three-goal performance in Central New York which was notched by T.J. Brennan at Utica on February 23, 2017.

It was the first professional hat trick for Phil Varone and the four-game goal streak also represents a career-best for the Vaughan, Ontario native.

Varone also added an assist to his big performance for a four-point night which is tied for the most in a game by the Phantoms this season previous done twice by Chris Conner in November. With 55 total points, Varone now is all alone in the lead in the American Hockey League. Varone entered the evening in a tie for the league-lead with Andrew Miller of Charlotte who were not playing on Wednesday. Varone is fast approaching his career-high of 61 points established in 2013-14 with the Rochester Americans and is on pace to become the first Phantom to lead the AHL in points since Peter White did so in back-to-back seasons in 1996-97 and 1997-98 in the first two years of the Philadelphia Phantoms.

Travis Sanheim notched a pair of assists for the second consecutive game including a helper on the Varone winning goal with 5:04 left. Sanheim is on an eight-game point streak which is the longest of the season for the Phantoms. He has scored one goal and 12 assists for 13 points in the incredible eight-game streak.

Greg Carey (22nd), T.J. Brennan (12th) and Cole Bardreau (5th) also notched goals for the Lehigh Valley attack while John Muse backstopped the team to victory with 36 saves on 40 shots. Muse improved to 7-1-0 with the Phantoms this season.

The Phantoms rallied from behind in the third period for a fifth time this year, the second-most comeback wins in the AHL. The game marked the opener of a three-game New York road-swing for the Phantoms that also takes the team to Syracuse and Binghamton this coming weekend.

Varone struck first from down low on the rebound of a shot by James de Haas from the blue-line. The drive off the pads of Utica goalie Thatcher Demko was quickly deposited into the back of the net by Varone at 4:39 for a 1-0 lead.

Utica eventually responded in the evenly played opening frame with David Dziurzynski (3rd) deflecting upstairs an attempt from center-point by Patrick Wiercioch for a 1-1 tie at 12:22 into the game.

The Phantoms were hanging on through the opening minutes of the second period that included a few scrambles and big saves by John Muse. Eventually the Phantoms broke through with Will O’Neill offering a stretch-pass that connected with Varone flying up the left-wing who sniped off the right post for his second goal of the game and a 2-1 lead for the Phantoms with 8:36 remaining in the middle frame.

That lead lasted all of 65 seconds before Michael Carcone’s first of the night evened the score again, this time at 2-2.

Carone struck again with just two minutes left in the second period on a wraparound that just did sneak through on the left pad of Muse for a 3-2 Comets advantage into the second intermission.

The Phantoms stormed out of the gates in the third period in a four-goal outburst to turn the tables on the streaking Comets and eventually secure the win.

Greg Carey rushed up the left wing on a flip from Varone and sniped on the short side past the right shoulder of Demko and off the inside of the post for his team-leading 22nd goal of the season thus forging a 3-3 deadlock with 18:26 remaining.

The Phantoms took advantage of their lone power play to take the lead yet again with T.J. Brennan converting from the right circle on a long rebound of a Vecchione shot from the left side. Sanheim recorded the first of his two helpers on the play that put the Phantoms ahead at 4-3 with 13:58 to go.

Utica eventually rallied to the the game with 7:34 left on a sharp-angle drive by Wiercioch (8th) for a 4-4 deadlock.

But before the Comers could secure yet another standings point by potentially pushing the game to overtime, the Phantoms would strike again. This time Sanheim found an open Varone on the right boards in the neutral zone who carried across the Utica line with speed and cut towards the slot for another snipe. This one was for the hat trick and was also the game-winner with 5:04 remaining giving the Phantoms a 5-4 advantage.

Lehigh Valley sealed the triumph on a long-range empty-netter for Bardreau from the red-line after an interception by Phil Myers that provided him with his second assist of the game.

Utica out shot the Phantoms 40-25. Utica was 0-for-1 on the power play while the Phantoms finished at 1-for-1.

The Phantoms continue their three-game Empire State road-trip on Friday night at the Syracuse Crunch and then wrap-up the New York travels on Saturday night at the Binghamton Devils.