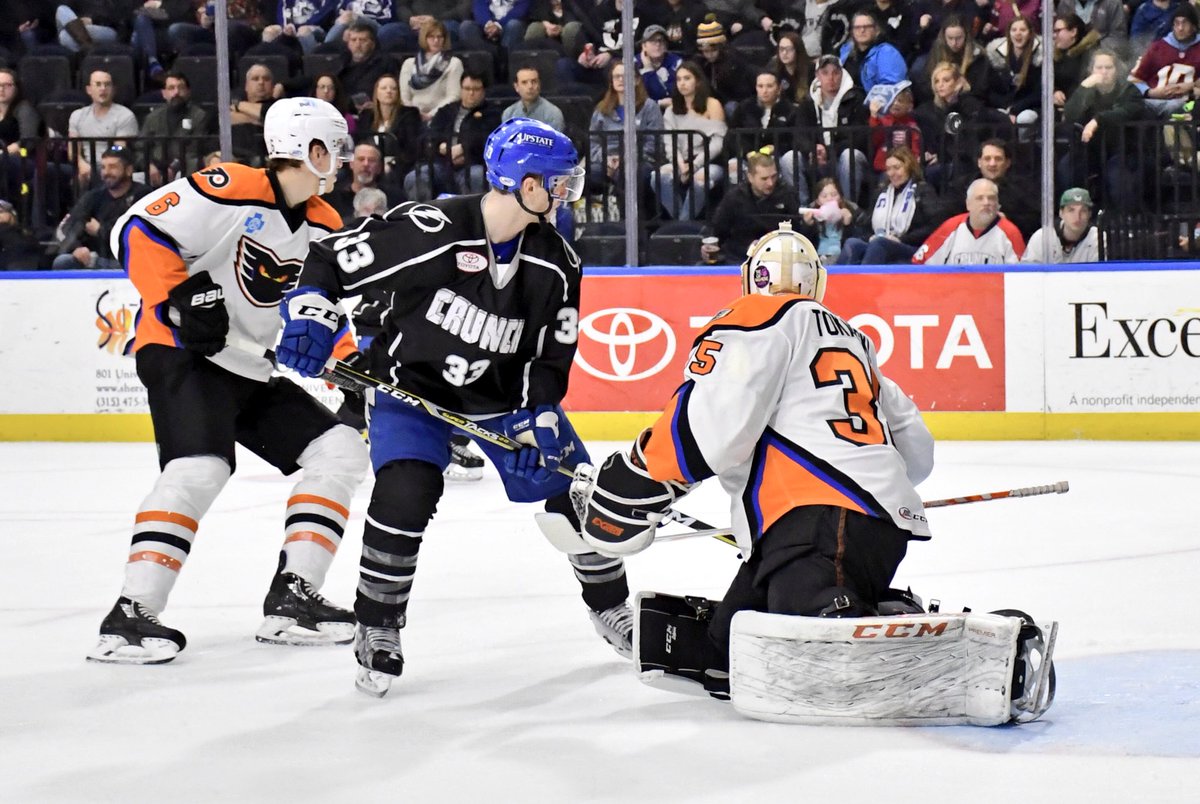 Syracuse, NY – Dustin Tokarski of the Phantoms and Eddie Pasquale of the Syracuse Crunch were matching each other save-for-save throughout an exhilarating and enthralling goaltenders duel but eventually the Syracuse Crunch broke a late 1-1 deadlock in the third period to pull out a 2-1 victory on Friday night in upstate New York. Michael Bournival’s goal with 2:44 remaining in regulation resulted in the conclusion of the Phantoms eight-game point streak and only the team’s second loss in the month of February.

Matt Read (7th) scored on an unassisted, shorthanded breakaway with 6:08 left in the third to forge a 1-1 tie but Lehigh Valley ran out of time in their efforts to secure another equalizer. Phil Varone almost extended his goal-streak to five games with about a minute left but just missed from the right side of the cage. Greg Carey and T.J. Brennan also had big chances in the concluding moments. Danick Martel was held off the scoresheet as well but had a couple glorious opportunities to break through that didn’t go his way on a tough-luck night for the Phantoms. Colin McDonald had an early breakaway but Pasquale was on his game right from the start.

The previously red-hot Phantoms offense had outscored the opponents by a combined 39-14 over the course of the recent eight-game point streak but tonight it was Eddie Pasquale who made the difference. The game was 0-0 through the first two periods with Dustin Tokarski also pulling off one remarkable save after another in the nail-biting, low-scoring drama.

The night marked the first time this season for the Phantoms to play to a scoreless deadlock after 40 minutes. It was also the first time Syracuse had such a lengthy stretch without a goal as well.

The evening marked the lone Syracuse visit this year for the Phantoms and the two quality teams split their season series at one game apiece with both sides successfully defending their home ice.

The first-place Phantoms saw their overall mark move to 35-14-7 while they road record shifted to 16-10-2. It was just the third one-goal loss in regulation for the Phantoms this year; Lehigh Valley’s record in one-goal decisions is 15-3-6.

The Crunch weaved into the zone with just over 11 minutes remaining in the third period with Erik Condra dropping for Bournival who blasted through his first goal of the night from the left circle for a 1-0 lead.

Matt Read smartly anticipated a blue-line pass by the Crunch and raced away all alone at goalie Pasquale. Read went to his left and elevated the backhander past the sprawling goalie with 6:08 left for the equalizer to forge a 1-1 deadlock. The conversion marked the seventh shorthanded strike of the season for the Phantoms and the second for Read who also scored a shorthanded empty-netter last Sunday against Wilkes-Barre/Scranton.

But the Crunch came through again shortly after Tokarski made a terrific point-blank save in the crease on Condra. But Bournival from the left of the goal aimed low and for the far post and connected with 2:44 left for what held up as the game-winner.

The Phantoms out shot Syracuse 32-31. Lehigh Valley was 0-for-4 on the power play while Syracuse finished at 0-for-3.

The Lehigh Valley Phantoms conclude their three-game New York road-trip on Saturday at the Binghamton Devils at 7:00 p.m.