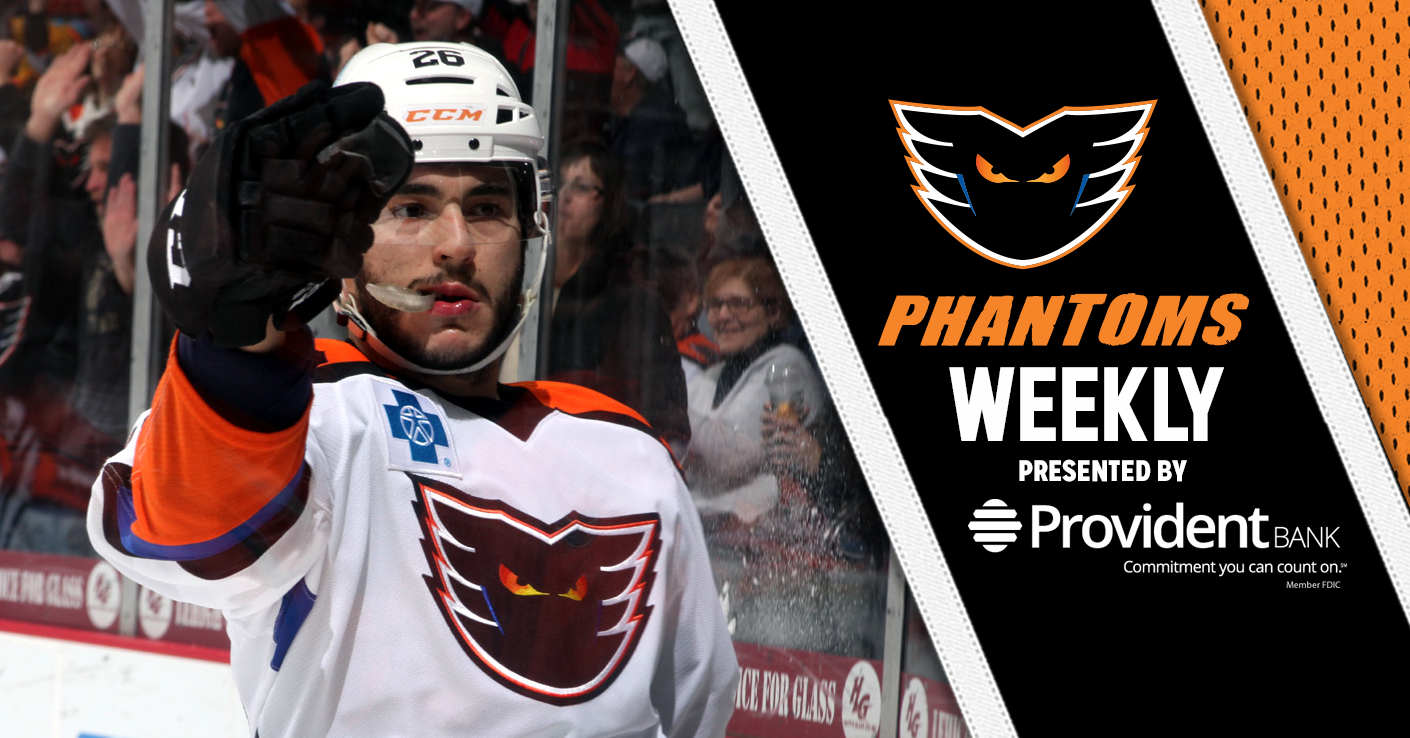 With standings points in seven straight games (6-0-1) and wins in 12 of their last 16 outings (12-2-2), the first-place Lehigh Valley Phantoms (33-14-3-4, 73 pts., 0.676 pts. pct., 1st Atlantic Division) look to continue their red-hot play as they hit the road for three games this week. The Phantoms enter the week with the most wins (33) and standings points (73) in the tightly-contested Atlantic Division. What’s more, Lehigh Valley’s 33 wins and 73 standings points ranks second in the entire 30-team AHL behind just the Toronto Marlies. 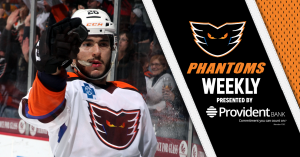 The Phantoms return to action this Wednesday, February 21 when they head up to Utica for a 7:00 p.m. showdown with the Comets. Utica (29-14-6-4, 68 pts., 0.642 pts. pct., 2nd North Division) claimed five of a possible six standings points across three games last week and enters the week as one of the hottest teams in the AHL with points in 16 straight outings (13-0-3). The Comets haven’t suffered a regulation loss since a 3-2 setback to the Syracuse Crunch back on January 12 and have earned 27 of a possible 30 standings points since. Most recently, Utica grabbed a 3-1 win against the Binghamton Devils last Friday before claiming a 5-4 overtime victory against the Wilkes-Barre/Scranton Penguins on Saturday after opening the week with a 3-2 shootout defeat against Syracuse on Wednesday. The Comets opened this week’s action with a 5-4 regulation win at the Belleville Senators on Monday.

Wednesday’s contest will mark the second and final meeting of the 2017-18 regular season between Lehigh Valley and Utica after the Comets claimed a 3-2 overtime win at PPL Center back on January 27. Mike Vecchione and Oskar Lindblom both scored that evening for the Phantoms in front of goaltender Dustin Tokarski who turned in an impressive 30-save performance between the pipes. 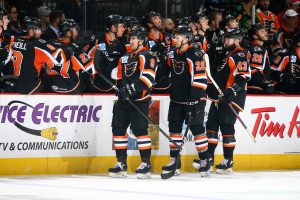 Lehigh Valley then continues its three-game road swing this week on Friday, February 23 when the team invades the Onondaga County War Memorial Arena in Syracuse for a 7:00 p.m. clash with the Crunch. Syracuse (30-18-2-3, 65 pts., 0.613 pts. pct., 4th North Division) won two of three games last week and enters the week having claimed four of its last five outings overall. The Crunch opened last week with a 3-2 shootout victory over Utica before a 2-0 loss against the Charlotte Checkers on Saturday followed by a 3-1 triumph at Charlotte on Sunday.

Friday’s game will be the second and final meeting this season between Lehigh Valley and Syracuse after the Phantoms earned a 4-2 win over the Crunch at PPL Center back on December 16. Chris Conner and Corban Knight each tallied a goal and an assist that evening while Will O’Neill and Nic Aube-Kubel added a pair of assists each in front of goaltender John Muse who earned the win after 22 saves on 24 Syracuse shots.

The Phantoms then cap this week’s action on Saturday, February 24 when they head to Binghamton for a 7:05 p.m. tilt with the Devils. Binghamton (15-27-6-3, 39 pts., 0.382 pts. pct., 7th North Division) won a pair of one-goal decisions last weekend but enters the week having dropped eight of its last 11 outings overall (3-6-2). Last weekend, the Devils earned a 1-0 overtime victory against the Rochester Americans on Saturday before outlasting the Americans 2-1 in a shootout on Sunday.

Saturday’s clash will mark the fourth of six total meetings during the 2017-18 regular season between Lehigh Valley and Binghamton with the Phantoms having posted a 2-1 mark through the first three collisions. Lehigh Valley opened the season series with back-to-back wins (4-3 on October 21, 6-5 on November 4) but the Devils grabbed the most recent get-together with a 3-0 victory in downtown Allentown back on November 29. Lehigh Valley’s Phil Varone (5 assists) and Binghamton’s Bracken Kearns (goal, 4 assists) currently lead all scorers in the season series with five points each. 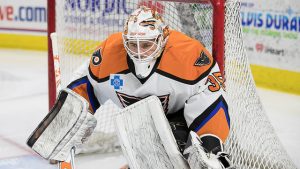 Dustin Tokarski turned in an impressive 40-save performance in earning his second shutout of the season as the Phantoms claimed a convincing 5-0 victory over the Bridgeport Sound Tigers. Five different Phantoms found the back of the net, including Mike Vecchione who notched a goal and an assist and Mark Friedman who tallied his first professional conversion. Meanwhile, Nic Aube-Kubel chipped in three assists as Lehigh Valley improved to 5-0 against Bridgeport this season.

All told, 11 different Phantoms recorded at least one point in the victory while defensemen Phil Myers and Travis Sanheim paced Lehigh Valley with a plus-four rating.

Corban Knight notched two goals and an assist and Danick Martel added a pair of goals as the Phantoms enjoyed their most productive offensive night of the season in an 8-2 victory over the Springfield Thunderbirds. Cole Bardreau and Greg Carey each chipped in three assists as well in front of goaltender John Muse who backstopped the victory with 36 saves on 38 Springfield shots.

Nic Aube-Kubel (15th), Oskar Lindblom (14th), Phil Varone (12th) and Maxim Lamarche (2nd) also found the back of the net for Lehigh Valley as the Phantoms earned their 15th road win of the season.

Oskar Lindblom (15th) and Phil Varone (13th) both scored for the second straight night and Dustin Tokarski turned in a strong 32-save performance but the Hartford Wolf Pack were able to rally for a 3-2 shootout victory in front of 8,177 fans inside PPL Center. Hartford’s Adam Tambellini notched a goal and an assist in regulation before converting the lone goal in the shootout as the Wolf Pack were able to snap Lehigh Valley’s five-game winning streak. 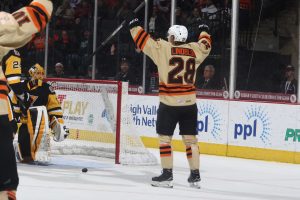 Travis Sanheim and Greg Carey paced Lehigh Valley’s offense with a pair of assists each as the Phantoms maintained sole possession of first place in the Atlantic Division with a 4-1 victory over the rival Wilkes-Barre/Scranton Penguins in front of 8,499 fans inside PPL Center. Oskar Lindblom (16th) and Phil Varone (14th) both scored for the third straight game while Mike Vecchione (12th) and Matt Read (6th) capped the scoring for Lehigh Valley.

Service Electric’s TV2 Sports will be broadcasting live each of the Phantoms’ 10 home games throughout the 2017-2018 regular season. If you can’t make it out to the rink, be sure to catch all the exciting action live in HD quality with Steve Degler, Todd Fedoruk, Doug Heater and Kristi Fulkerson! Pre-game coverage begins with “Phantoms Front and Center” 30 minutes before puck drop.