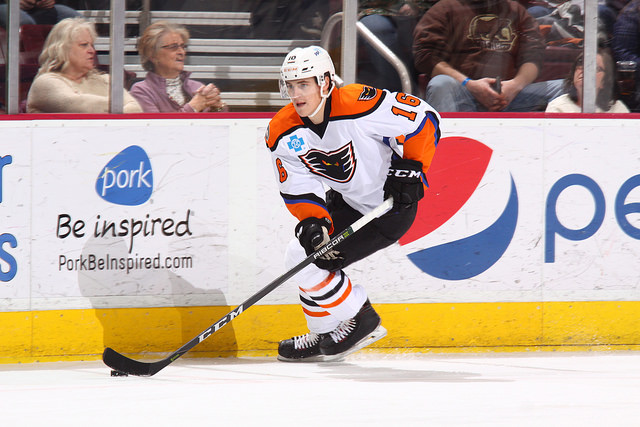 Hershey, PA – T.J. Brennan blasted through the game-winning goal in overtime to propel the Lehigh Valley Phantoms to a thrilling 2-1 victory at the Hershey Bears on Sunday evening. The Phantoms won back-to-back decisions by the same score in the home-and-home series to improve to 6-2-0 against their rivals from Chocolatetown. 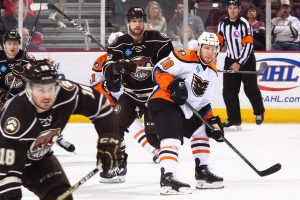 This game had a little bit of everything and featured spectacular goaltending performances on both ends of the ice by Lehigh Valley’s Alex Lyon and Hershey’s Pheonix Copley in one of the most entertaining games of the year. For Brennan, his seventh goal of the season was a bit of “third try is the charm.” The Moorestown, New Jersey native rocketed a drive off the post in the second period and then was robbed by Copley’s fantastic glove save with just 40 seconds to go in the third. But on his chance in the extra session, Brennan opted to aim for the blocker side where his power-play strike successfully concluded a thrilling evening at Giant Center. 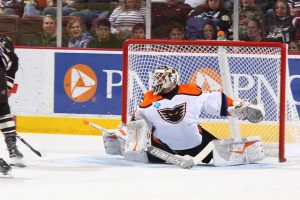 Nicolas Aube-Kubel (11th) also scored for the Phantoms on an assist by Mike Vecchione capping a 3-on-1 rush that was triggered by Brennan immediately after one of Lyon’s several impressive stops. Chris Bourque (12th) was the lone goal-scorer for the Bears.

It was the fourth overtime win for the Phantoms this season and T.J. Brennan joins the likes of Greg Carey, Will O’Neill and Corban Knight who have also scored deciding lamplighters in the bonus 3-on-3 session.

Brennan scored in both games of the weekend series and now has five goals in the last eight games as well as three in the last four. His 141st career goal is second-most among AHL defensemen and pulls him to within 25 of the all-time record held by former Phantoms great John Slaney who had 166 in his Hall of Fame career. 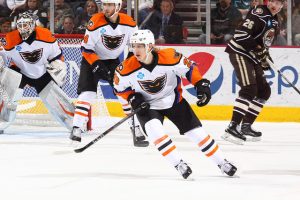 In recording the back-to-back wins, the Lehigh Valley Phantoms improved to 23-12-5 overall and vaulted past the Providence Bruins into second place in the Atlantic Division entering their head-to-head showdown with the first-place Wilkes-Barre/Scranton Penguins on Wednesday evening in Northeast Pennsylvania. The next meeting for the Phantoms and Bears will see the two teams taking it outside to Hersheypark Stadium next Saturday in the second outdoor game for the Phantoms franchise and the 10th ever in the American Hockey League.

The story of Lehigh Valley’s thrilling Sunday evening win was in each respective crease where both netminders pulled off one spectacular denial after another. The goaltending wizardry went up an additional notch in the third period in the nailbiting 1-1 deadlock; Travis Boyd was all alone and in the clear on a breakaway but Lyon denied a solid offering with a flashy save off the left pad. Moments later it was Philippe Myers on a shorthanded breakaway after Matt Read connected with him through the neutral zone but Copley saved the day with a great glove stop with 5:00 left to keep the game deadlocked. 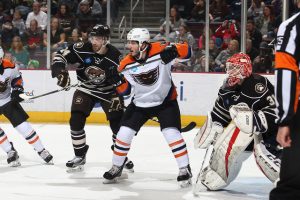 It was Copley’s save with 40 seconds left in the third to rob Brennan’s drive from the left circle that was maybe the best save of the night. Reaching well across and up to his left while coming out of the splits, Copley’s stab with the glove was one of the best saves of the year on a shot that almost certainly the Phantoms believed was going to be a game-winner.

Ultimately that save earned the Hershey Bears one standings point. But Brennan didn’t miss on his second career overtime strike as a Phantom less than minute into the extra-period. He also scored an overtime winner on the power play last March on the road at St. John’s.

Bourque cut into the crease in the first period to receive a quick feed from the left corner by Matthias Bau for a 1-0 lead in the first period. Travis Boyd from behind the net also assisted on the play. Oskar Lindblom had earlier put one off the iron but the Phantoms were not able to break through in the opening stanza.

Lehigh Valley countered in the second period shortly after one of Lyon’s big saves. His paddle stop on Riley Barber quickly sent the Phantoms flying the other way with a 3-on-1. Brennan connected with Vecchione up the left wing whose pass across was potentially deflected but still made it through to the middle where Aube-Kubel successfully lunged in for a backhand chip directly to the top of the net for a nifty goal tying the score at 1-1.

Both teams had power play chances late in the third period but the Lehigh Valley and Hershey penalty-kill units rose to the occasion to force the game in overtime. But when the Phantoms were granted another power play chance in the overtime they would bury it with Phil Varone and Greg Carey assisted on Brennan’s winner.

Brennan’s goal continues a trend of several recent successes in post-regulation outcomes at Giant Center. Chris Conner clinched a shootout victory here on October 15. And last year Chris Conner won Game 3 of the playoffs in overtime on a breakaway against Copley. Earlier in the 2016-17 season in December came a Phantoms overtime goal from Jordan Weal.

The Phantoms travel to Wilkes-Barre on Wednesday ahead of their outdoor game at Hershey on Saturday. The Lehigh Valley Phantoms return home on Wednesday, January 24th to take on the Providence Bruins on Photograph Night. All fans are allowed to meet their favorite Phantoms players after the game to snag some pics in another tremendous fan interaction opportunity. That night also opens a four-game homestand for the Phantoms. Secure your tickets in advance at PPLCenter.com or by calling 610-347-TIXX [8499]