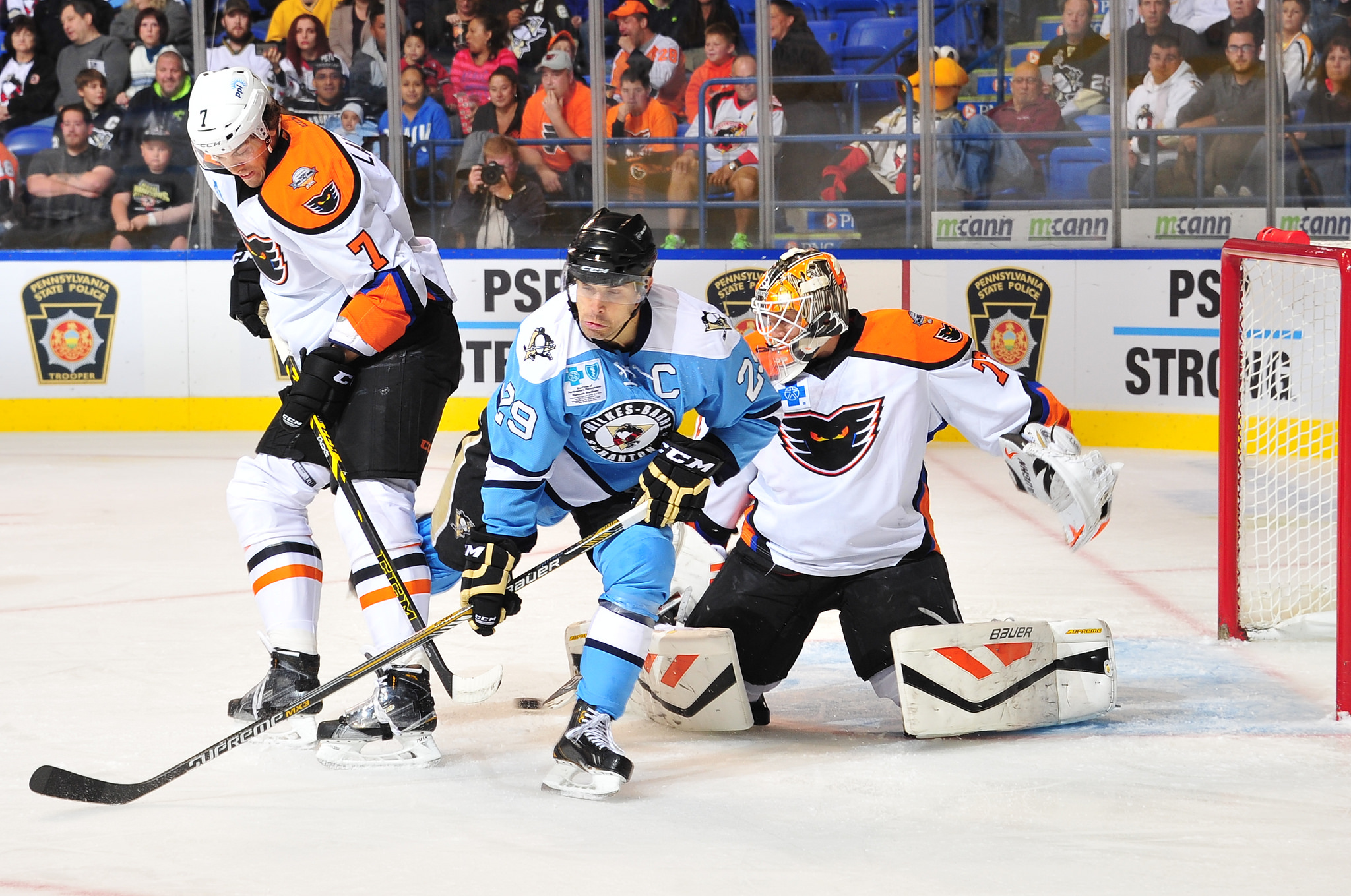 The Phantoms return to PPL Center tomorrow evening as they welcome the rival Wilkes-Barre/Scranton Penguins to Lehigh Valley for the first time this season. Tomorrow’s contest marks the second of 12 total meetings throughout the 2014-2015 regular season between the Phantoms and Penguins with Lehigh Valley having already captured the first head-to-head match-up thanks to a 5-2 triumph at the Mohegan Sun Arena in Wilkes-Barre/Scranton on October 11th. Chris VandeVelde notched two goals that evening while the Phantoms’ power play went 3-for-5 and goaltender Rob Zepp stopped 21 of 23 total shots en route to the victory.

Tickets for tomorrow’s rivalry showdown are available now at the Mealey’s Furniture Box Office at PPL Center (701 Hamilton Street), by calling 610-347-TIXX (8499) or online at pplcenter.com.

Lehigh Valley (4-2-0, 8 pts.) enters tomorrow’s match-up tied with Wilkes-Barre/Scranton (4-4-0, 8 pts.) for second place in the East Division. Through the season’s first three weeks, the Penguins have played two more games than the Phantoms and are coming off a productive weekend, which saw Wilkes-Barre/Scranton claim two victories over a busy three-game weekend. The Penguins enter the week having won four of their last six games overall.

Meanwhile, the Phantoms also won two of three games last week earning a come-from-behind 4-2 win at home over the Hershey Bears on Friday before claiming a thrilling 5-4 overtime triumph at the Binghamton Senators on Saturday. After Lehigh Valley plays host to the Penguins on Wednesday, the Phantoms welcome the Hartford Wolf Pack to PPL Center for a 7:05 PM showdown on Saturday.

The state-of-the-art PPL Center has a sellout capacity of 8,420 fans for hockey
games and features 26 Luxury Suites, 6 Party Suites, 4 Ice Suites and the incredibly unique BSI Suite, which offers fans the opportunity to be face-to-face with the Phantoms as they exit their locker room and head out onto the ice! What’s more, the PPL Center also features a four-panel, center-hung, high-definition video scoreboard. 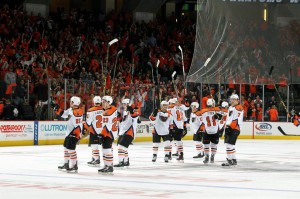 The Phantoms may have only played two regular season games at PPL Center so far but Lehigh Valley has claimed a pair of dramatic victories in its first two games in its new home. The team began the newest era of Phantoms hockey less than two weeks ago with a dramatic 4-3 overtime victory against Adirondack in front of a standing room-only crowd of 8,647 raucous fans. Fourth-year Phantoms defender Brandon Manning netted the game-winner while Scott Laughton notched a pair of goals in the historic win.

But the theatrics didn’t end there. Lehigh Valley remained perfect at home this past Friday evening when the Phantoms scored three goals in the final six minutes of play to erase a one-goal deficit en route to a 4-2 victory over Hershey. Taylor Leier, Darroll Powe and Petr Straka scored just 1:53 apart as Lehigh Valley sent a crowd of 7,881 spectators into a state of shock and frenzy. 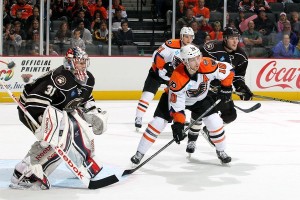 Taylor Leier, Darroll Powe and Petr Straka all scored just 1:53 apart in the third period as the Phantoms turned a late 2-1 Hershey advantage into a 4-2 Lehigh Valley victory. Powe’s goal was the second of two goals on the evening while Leier’s was his first professional conversion.

Nick Cousins added a pair of assists while Rob Zepp registered 29 saves on 31 total shots in front of 7,881 fans at PPL Center.

Meanwhile, Brandon Manning and Darroll Powe each chipped in two assists for the Phantoms while Zepp improved to a perfect 4-0 on the young season after 36 saves on 40 total shots.

Lehigh Valley fell just short of a perfect weekend when the Phantoms were handed a 3-0 setback in Hershey this past Sunday. Making just his second professional start, Anthony Stolarz stood tall in goal for Lehigh Valley as he recorded 27 saves on 29 total shots. Meanwhile, Bears netminder Pheonix Copley earned the victory with 22 total saves.

Lehigh Valley enters the week with the second-highest rated power play in the entire AHL. The Phantoms are tied for second among all AHL clubs with eight man-advantage markers and boast the second-best power play percentage at 29.6 percent.

What’s more, Lehigh Valley is a perfect 4-0 this season when recording at least one power play goal in a game and the Phantoms have already produced multiple man-advantage markers in three of their first six games this season. 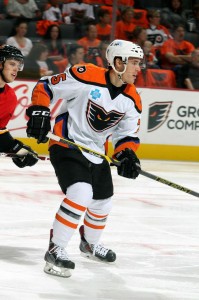 Second-year Phantoms forward Nick Cousins enters the week first among all Lehigh Valley skaters and tied for fourth among all AHLers in total scoring with eight points. A native of Belleville, Ontario, Cousins has produced two goals, six assists and four multi-point games through the team’s first six contests overall. What’s more, the Phantoms are a perfect 4-0 when Cousins registers two or more points in a game this year.

Meanwhile, rookie center Scott Laughton leads all Phantoms and is tied for second among all AHL skaters with five goals through the season’s first three weeks. The 20-year-old pivot was named CCM/AHL Player of the Week last week after depositing four goals in two games and the native of Oakville, Ontario added to his team-leading total this past Saturday with the overtime game-winner in a 5-4 triumph at Binghamton.

Service Electric’s TV2 Sports will be broadcasting live all of the Phantoms’ 36 remaining regular season home games. If you can’t make it out to the rink, be sure to catch all the exciting action in high definition with Steve Degler and former Flyers and Phantoms goaltender Brian Boucher! And don’t miss “Phantoms – Breaking the Ice” every Monday from 7:00 – 8:00 PM throughout the season live at Chickie’s & Pete’s (701 Hamilton Street)!

Tickets for all of the Phantoms’ 36 remaining regular season home games, including this Wednesday’s and this Saturday’s highly-anticipated showdowns, are on sale now at the Mealey’s Furniture Box Office at PPL Center (7th & Hamilton), by calling 610-347-TIXX (8499) or online at pplcenter.com.